It’s a good bet that news of a new thwarted underwear bomber will underlie more than one argument for the strip‐​search machines American travelers encounter even at the domestic terminals of our airports. According to the AP:

The plot involved an upgrade of the underwear bomb that failed to detonate aboard a jetliner over Detroit on Christmas 2009. This new bomb was also designed to be used in a passenger’s underwear, but this time al‐​Qaida developed a more refined detonation system, U.S. officials said. … The would‐​be suicide bomber, based in Yemen, had not yet picked a target or bought his plane tickets when the CIA stepped in and seized the bomb, officials said.

Reading this, you’ve been reminded of the fact that, somewhere in a remote Middle Eastern backwater, someone would like to bomb an aircraft flying into the United States. For many, this will induce a bout of probability neglect, making it very hard to process the upshot of this news: This type of attack, which was already very unlikely to succeed, has been made even less likely to succeed.


How did it become less likely to succeed? Let’s use the Transportation Security Administration’s layered security concept to examine things.


In December 2009, the underwear bomber (well—he failed: the “underwear bomb plotter”), managed to get a deformed bomb onto a plane. It was so deformed that he could not cause it to explode. Instead, he burned himself while other passengers subdued him. In the TSA’s formulation, the plot was foiled by the last security layer (it’s hard to read in the graphic): passengers. 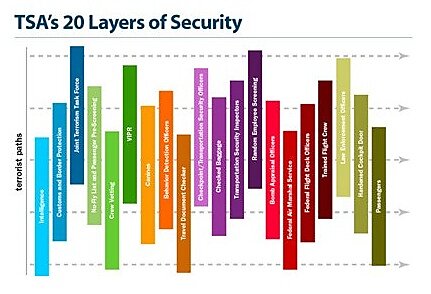 (This is not actually the last security layer. The design of planes to withstand shocks to the fuselage is a preventive against downings that small smuggled bombs will have a hard time overcoming.)


The latest news has it that an updated underwear bomb was seized in Yemen by the CIA. That’s the first layer of security in the TSA’s graphic. Intelligence—the first layer.


(This is not actually the first security layer. A benign, phlegmatic foreign policy would produce fewer people worldwide wishing to do the United States harm and more people intolerant of those who do.)


Now, it is not all 100%, unalloyed good security news. As the AP report says:

There may be an innovation in underwear bombs that make them easier to smuggle on to planes. At its best, this innovation may render the body scanners useless against them. (Again, watch for arguments that, despite their impotence, this news makes body scanners all the more essential. A news report yesterday said that new vulnerabilities in the machines have been unearthed by government investigators.)


On balance, I think this news shows just how much the threat is diminished. Innovations in bomb‐​making, happening on the far outskirts of modern society, are being thwarted at their source, long before they begin the journey through the many other security layers that protect aviation and air travelers. You may continue to move about the country even more confident of your safety than you did before. I’m hopping on a plane again Friday morning, and I will be just as polite and cheerful as ever in declining to go through the strip‐​search machines.