Yesterday, the U.S. Department of Education released the latest results from the Long Term Trends portion of the National Assessment of Educational Progress. The NAEP LTT was specifically designed to track changes in student performance over time, even when there aren't any. The chart below depicts the average performance of U.S. 17-year-olds across subjects, relative to the scores of the students who took these tests 40 years ago. 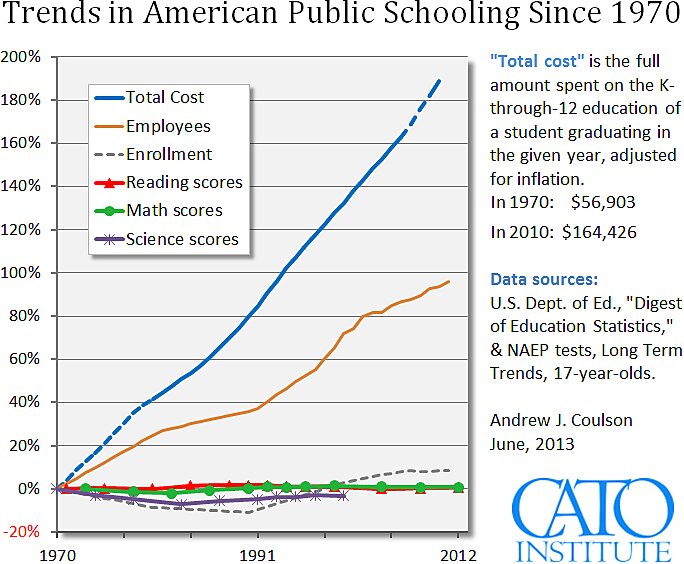 There have been some slight improvements in the scores of younger children, but they don't last. By the time students are preparing to enter higher education or the workforce, they are no better prepared academically than they were two generations ago--despite the fact that we have spent three times as much on their K-12 education as we did educating the class of 1970.

What explains this stagnation?

Officials suggest the results for 17-year-old students reflect fewer low-performing students dropping out. For instance, Hispanic students had a 32 percent dropout rate in 1990 and that number fell to 15 percent in 2010, said Peggy Carr, an associate commissioner with the National Center for Education Statistics."These students are generally scoring at the lower end of the distribution but it's a good thing that they're staying in schools," Carr said.

There are several problems with this explanation. First, Carr seems to be referring to the NCES's "status" dropout rate that counts a GED as high school completion (see Figure 2, page 21, here). But a student who takes the GED is not in school, would therefore presumably not participate in the NAEP test, and could therefore not drag down the NAEP average. Moreover research by Nobel laureate economist James Heckman (among others) has demonstrated that:

(a) the true high school graduation rate is substantially lower than the official ["status"] rate issued by the National Center for Educational Statistics; (b) it has been declining over the past 40 years; (c) majority/minority graduation rate differentials are substantial and have not converged over the past 35 years; (d) the decline in high school graduation rates occurs among native populations and is not solely a consequence of increasing proportions of immigrants and minorities in American society;

The evidence thus seems to contradict the NCES's explanation for the four-decade stagnation in achievement among 17-year-olds. Here is a more plausible one: Improvement is hard. Systematic progress only occurs when producers have the freedoms and incentives to innovate and excel. Our public-school monopolies do not provide those freedoms and incentives, and so they stagnate while their costs inexorably rise.