President Biden and the Democrats are including $350 billion in aid for the states in their $1.9 trillion stimulus bill. But state and local budgets are in decent shape, and finances will continue to improve as the economy recovers. Further state handouts are not needed.

Policymakers may think that state and local budgets are in crisis because that is what news reports have been claiming most of the past year. Unfortunately, reporters have been misled by spending advocates overstating state and local budget challenges. The same thing happens with spending on infrastructure, defense, and education. Advocates frame narratives about how the world will end without more spending, and reporters tend to believe them.

However, as positive data on state and local budgets continues to roll in, news outlets are beginning to revise their stories. The Wall Street Journal reported last week that “Covid-19’s Hit to State and Local Revenues Is Smaller Than Many Feared.” Moody’s Analytics, which was far off base in claiming budget shortfalls of $500 billion, is now only claiming shortfalls of $330 billion.

Even the pessimists at Moody’s had to start changing their tune when states such as California began reporting budget windfalls rather than crises. Revenues are pouring into Golden State coffers as the tech industry and the top 1 percent who pay half of the state’s income taxes ride high. 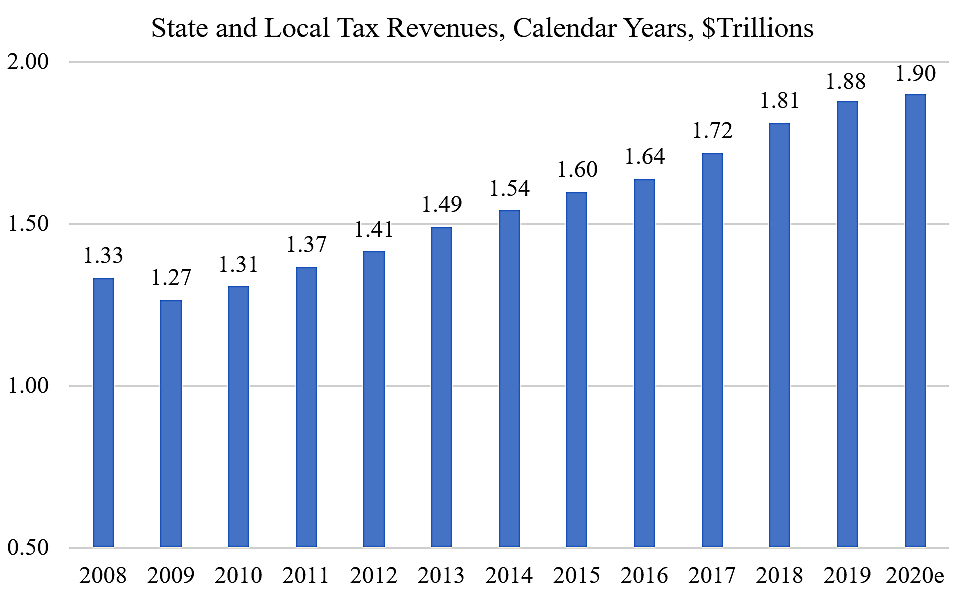 Spending advocacy groups are still claiming that state and local budget “shortfalls” are hundreds of billions of dollars. It is true that tax revenue growth in 2020 was slower than projected before the pandemic, but that is only a “shortfall” if you assume that budgets must always grow at the strong pre‐​pandemic rates. Yet states should know that booms do not last forever. If revenues are growing slower, then states should slow spending growth to match.

Perhaps tax revenues will fall in 2021, as they did in 2009. But that seems unlikely. CBO projected yesterday that real GDP will rise a strong 4.6 percent in calendar 2021. Private forecasters are also projecting solid growth. As incomes rise, state tax revenues should grow. Meanwhile, local governments are gaining from rising house prices because property taxes account for 70 percent of local tax revenues. U.S. house prices in the fourth quarter were up 14.9 percent on the year and are expected to remain strong in 2021.

Economic forecasters do make mistakes. But right now the economy is growing, and giving more aid to the states is unneeded, even if that were a proper federal responsibility.