The United States’ immigration system favors family members over workers.  About two-thirds of all green cards issued annually are to immigrants whose qualification for being here is their relationship to American citizens or other green card holders.  This is in contrast to countries with so-called merit-based immigration systems that favor skilled immigrants, such as Australia and Canada.  Only 24 percent and 31 percent of annual immigrants to those two countries, respectively, gained permanent status through family connections.  Comparing the composition of the immigrant flow obscures important differences in immigration policy: Canada and Australia allow in many more immigrants than the United States does as a percentage of the population.

The United States allows in about a million lawful permanent residents a year, the largest number of any country, but that is a small percentage of the almost 325 million people who already live in the United States – about 0.3 percent annually.  By comparison, Australia Canada each allow in about 250,000 immigrants a year but they are much smaller countries with about 23 million and 35 million residents, respectively.  Thus, as a percentage of their populations, the annual inflow of immigrants into Canada and Australia is significantly larger than in the United States.  The annual number of immigrants to Australia is equal to 1.1 percent of the Australian population while the annual number to Canada is equal to about 0.7 percent of the Canadian population, which makes them 3.5 and 2.4 times as open to immigration as the United States, respectively (Figure 1).  If the United States were to copy Australia or Canada’s merit-based immigration policies, our government would admit about 2.3 million to 3.5 million immigrants annually.

Immigrant Inflow as a Percent of Population, 2013 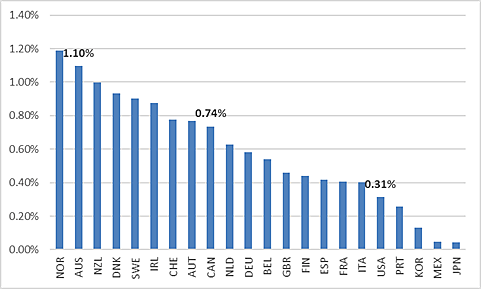 Immigrant Family Inflow as a Percent of the Population, 2013 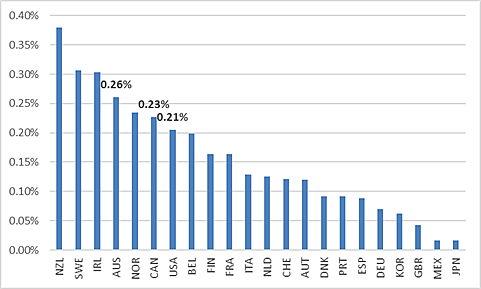 There are significant differences in the family flow in each country.  Canadian and Australian family-based immigrants are almost entirely the immediate family members of citizens or other immigrants while many in the United States are adult children and siblings of U.S. citizens and green card holders.

Another difference is that the U.S. system creates family-based chains that increase future immigration in an unpredictable way relative to the Australian and Canadian system.  More distantly related relatives are less likely to be similar to the original skilled immigrant than immediate relatives.  Although the initial immigrant from a family is a skilled worker, his brother’s wife’s sibling, who could be admitted many years after the initial immigrant in the chain, is less likely to be so.  However, immigrants admitted through family categories are still a greater percentage of their destination country's population in merit-based systems of Australia and Canada than in the United States.

The biggest and most persistent difference between Australia and Canada and the United States is the number of workers admitted annually.  As a percentage of all annual immigrant flows, workers are 24 percent for Australia, 25 percent for Canada, and 8 percent for the United States.  Those percentages undercount workers in Australia and Canada because the OECD counts substantial regional immigration programs in both countries as “other” rather than “workers.”  As a percent of the native workforces, Australia and Canada respectively allow in 12 times and 7.5 times as many worker immigrants annually as the United States (Figure 3).  The multiples are similar when compared to the total population (Figure 3).  American complaints about immigrant workers on green cards taking American jobs seem silly in light of the fact that their annual flow is equal to about 0.04 percent of the native worker population.  There's no excuse for admitting so few skilled immigrant workers on green cards.

Immigrant Worker as a Percent of the Native Workforce and the Native Population, 2013 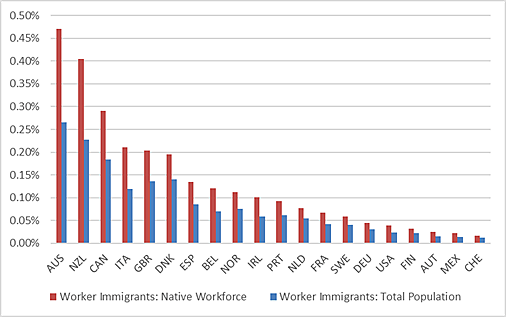