Harvard economist George Borjas recently published an important paper on how the unexpected surge of 125,000 Cubans (henceforth Marielitos) to Miami in 1980 lowered the wages of native-born male Miamians with less than a high-school degree. Because at least 60 percent of the Marielitos were high school dropouts, Borjas found that the negative wage effects were concentrated on Miamians with the same level of education.

There are excellent criticisms of Borjas’ paper that show his results hinge on the control cities he chose, his exclusion of women, the age group of the workers, whether Hispanics are included, whether high-school-or-less or no-high-school-at-all are included, and whether datasets with the larger samples are used. For the sake of argument, supposing that Borjas made the correct methodological choices on every single point above, the Mariel Boatlift still raised the wages for low-skilled U.S. workers collectively due to wage complementarities. That’s because native-born Miamians with only a high school degree (no associate degree, no education after high school) experienced significant wage increases immediately after Mariel relative to workers with the same levels of education in the control groups, or placebos, of other cities. Borjas’ supporters ignore this finding but he does not.

Another working paper by Borjas and Monras on the wage effects of refugees also found that “the rate of wage growth for high school graduates, a group whose size was only increased modestly by the Marielitos, is noticeably higher in Miami than outside Miami.”  They go on to write that, “the predominantly low-skill Marielitos . . . raised the wage of workers with a high school education, and this effect is both numerically and statistically significant. The cross-wage elasticity is about +0.7 [compared to -0.9 for high school dropouts].”  They do not find any employment effects for high school dropouts but they did uncover positive and statistically significant employment gains for those with a high school degree. Furthermore, Figure 7.5 on page 148 of Borjas’ new book We Wanted Workers hints at a wage increase for high school graduates immediately after Mariel.

My intern Cole Blondin and I followed Borjas’ methods to create graphs for the wages of high school graduates before and after the Boatlift. We used the March Current Population survey (March CPS) and combined the May Current Population Survey and the May Outgoing Rotation Group (May CPS-ORG) datasets. The only differences are that we present the figures in dollars rather than logs, we did not use three-year averages to smooth the data, and we did not recreate the synthetic control. One final note, the wage effect of the Marielitos must be compared to placebos because there was only one Miami in 1980 and we can’t actually observe what would have happened to that city had the Marielitos not arrived. We used the same sets of placebo cities as Borjas.

Even under Borjas’ assumptions, native-born male Miamians with a high school degree or less saw a ­net-wage increase after the Mariel Boatlift. 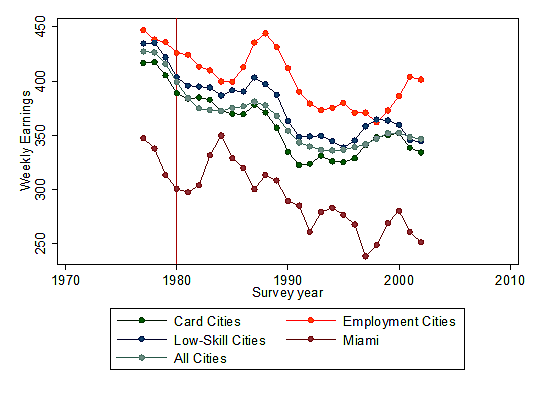 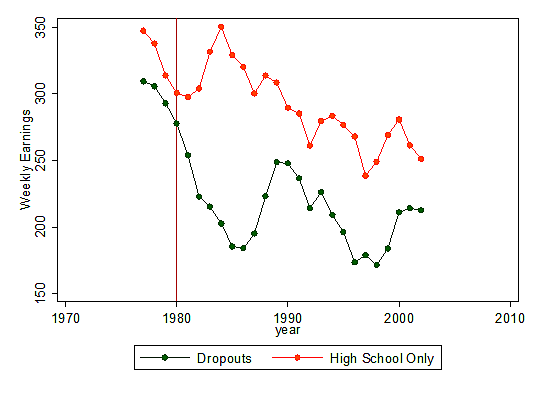 We compare the pre- and post-Mariel Miami wages, weighted by the relative size of the native educational cohorts in the March CPS, to produce a rough estimate of Mariel’s net impact on native wages.  For instance, if there are 10 high school dropouts who each lose $1 and 20 high school only graduates who each gained $0.60, then the net wages earned by Americans increased by $2 [(20*$0.60)-(10*$1)]. In such a scenario, total wages rise for Americans who are high school dropouts and high school graduates.

We compared the post-Mariel period of 1981 to 1986 to the pre-Mariel period of 1976-1979. The total wage gain for high school graduates outweighs the total losses for high school dropouts in the “All Cities” placebo (the placebo that produced Borjas’ stunning graph). The Card and Low-Skill placebos also returned slightly net wage losses while the employment placebo returned a deeply negative result (Table 1).  The average for all the placebos from the March CPS data was -5.85.

Professor Borjas also used the May CPS-ORG data to test whether Mariel lowered the wages of similarly-skilled Miamians. The May CPS-ORG dataset returned a much smaller wage decrease for high school dropouts in Borjas’ paper. This is important by itself because the May CPS-ORG dataset is superior for two widely-reported reasons: First, the May CPS-ORG contains fewer errors because it asks respondents about their wages last week rather than last year (which is the case for the March CPS). Second, it has a larger sample size than the CPS in every year from 1979 onward.

Regardless, we confirmed Professor Borjas’ findings that the wages of male high school dropouts in the relevant age range fell after the Mariel Boatlift, although they fell less than in the March CPS data (Figure 4). We also found that the wages for high school graduates in the May CPS-ORG dataset increased relative to the placebo cities after the Mariel Boatlift (Figure 5). 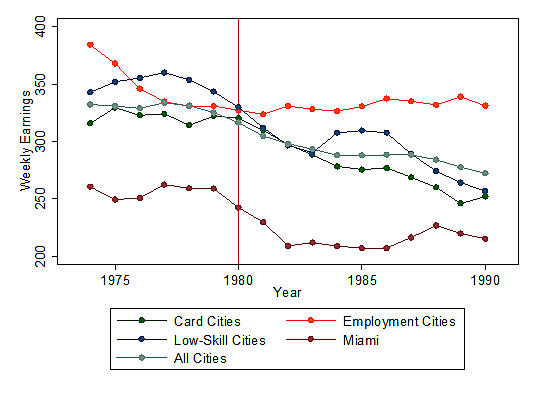 High School Only Graduates, May CPS-ORG 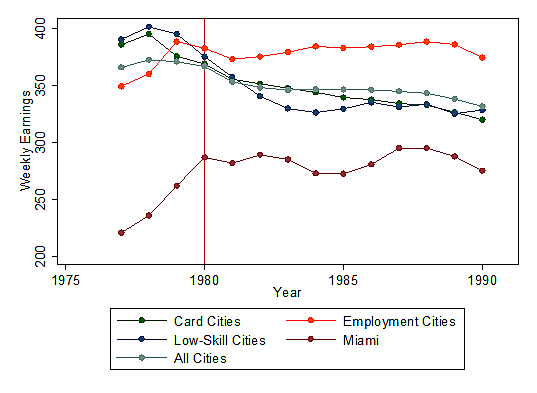 The wage gains for high school graduates outweigh the losses of male high school dropouts in Miami for each placebo group—using the March CPS weight of the population by education (Table 2). The Card Cities, Low-Skill Cities, and All Cities placebos all returned very positive results.  The Employment Cities placebo was the only one that returned a slightly negative result. The average net gain for high school graduates and dropouts across the placebos is a positive +17.43.

The Mariel Boatlift provides a wonderful natural experiment to test how a sudden, exogenous surge of immigrants affects wages. Professor Borjas’ examination of how Marielitos substituted for native-born Miamians with the same level of education is an important component of that story. However, most have ignored the important complementary effects of the Marielitos on the wages of workers with only a high school degree. A full understanding of Professor Borjas’ contributions to this subject requires acknowledging these complementary effects. To borrow the language used by Professor Borjas, the Marielitos’ redistributed wages from dropouts to workers with only a high school degree with a net positive effect on all low-skill workers.

Special thanks to Cole Blondin for his excellent work on this blog post.