Left and Right in China

There's an ideological divide in China, and it's basically statist vs. classical liberal, as Tyler Cowen puts it.

Based on 171,830 responses to an online survey, Jennifer Pan and Yiqing Xu "offer the first large scale empirical analysis of ideology in contemporary China." They "identify one dominant ideological dimension in China."

Individuals who are politically conservative, who emphasize the supremacy of the state and nationalism, are also likely to be economically conservative, supporting a return to socialism and state-control of the economy, and culturally conservative, supporting traditional, Confucian values. In contrast, political liberals, supportive of constitutional democracy and individual liberty, are also likely to be economic liberals who support market-oriented reform and social liberals who support modern science and values such as sexual freedom.

This is interesting in several ways. First, of course, it means that China is no longer ideologically monolithic, as it was at least officially in the days of Maoism. And a significant number of people seem to support what we would call classical liberal or libertarian values -- "constitutional democracy and individual liberty, ... market-oriented reform ... modern science and values such as sexual freedom." The online survey isn't scientific or representative enough to estimate the prevalence of each ideology.

Second, it's refreshing to see ideological views lined up in a coherent way. Libertarians usually find the standard American ideologies inconsistent. Today's "liberals" (unlike classical liberals from Locke and Smith and Mill to Hayek) tend to support democracy and at least some forms of personal and civil liberties, but not free markets. Today's conservatives support free markets but have tended to oppose civil rights, drug decriminalization, and sexual freedom. In China those who support "the supremacy of the state and nationalism" also, quite understandably, support state control of the economy and state support for traditional values. That's a bad package, but at least it's coherent. And so is the opposing liberal ideology.

Note that Pan and Xu call the anti-libertarians "conservative" and the libertarians liberal. They also refer to "conservatism on the left (左) and liberalism on the right (右)," so reading their paper can be a bit jarring for an American reader. They explain:

These concepts of left and right are not yet fully elaborated or organized, but broadly speaking, Chinese intellectuals have defined the core ideological divides in China as those between conservatives on the left who support a socialist (authoritarian) state, who emphasize national unity and security, who think highly of the old communist/socialist economic system, and who value traditional culture, versus liberals on the right who advocate for a constitutional democracy, who embrace individual liberty, who support market-oriented reform, and who are enthusiastic about modern science and technology....

In this table they line up the values held by "conservatives on the left" and "liberals on the right." 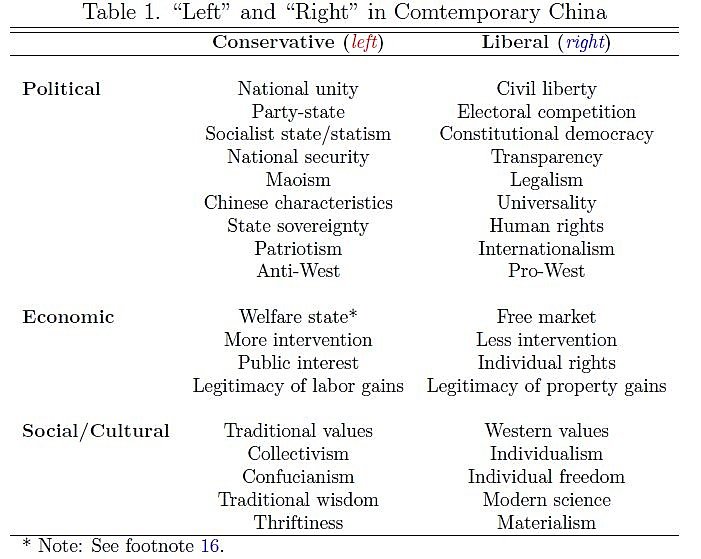 That's a more coherent lineup than you'd find in a list of "conservative" and "liberal" attitudes in the United States. Pan and Xu find that liberal attitudes are most likely to be found in areas that are more open to trade, urbanized, and economically developed and among those with more education and income.

Pan and Xu don't suggest which ideology is likely to prevail, but at least I know which side to cheer for.

At Foreign Policy Taisu Zhang examines some of this in a Chinese context, including the relationship between traditional Confucianism and contemporary Chinese socialism. I discuss left, right, and libertarianism on pages 29-36 of The Libertarian Mind.