Yesterday I shared some very good news about Brazil adopting a spending cap.

Today, I also want to share some good news, though it's not nearly as momentous.

Indeed, it's not even good news. Instead,

it's just that some bad news isn't as bad as it used to be.

I'm referring to the fact that the nation's capital region used to be home to 10 of the nation's 15-richest counties.

That was back in 2012, and I viewed it as a terrible sign that the DC area was packed with overpaid bureaucrats, oleaginous rent seekers, and government cronies, all of whom were enjoying undeserved wealth financed by hard-working taxpayers from the rest of America.

Well, now for the "good news."

Terry Jeffrey has a column for CNS News about the current concentration of wealth in the national capital area.

Here's Terry's list, which I've augmented by highlighting the jurisdictions that are home to many of the bureaucrats, lobbyists, and other insiders that are living on Easy Street thanks to the federal leviathan. 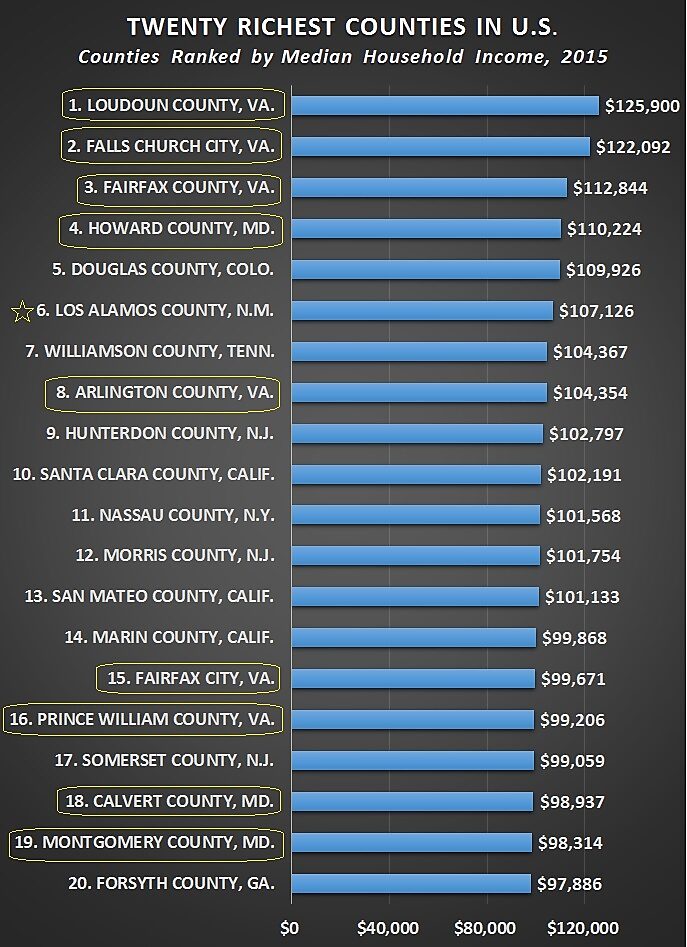 I also awarded a star to Los Alamos County in New Mexico since that's another jurisdiction that has above-average income because of Uncle Sam.

To be sure, not every private-sector worker in these rich counties is a cronyist, lobbyist, or rent seeker, so it's difficult to accurately say what share of the income and wealth in these various counties is earned and how much is a transfer from government.

But we can say with confidence that the bureaucrats who are over-represented in these jurisdictions get a lot more compensation than their counterparts in the private sector. Chris Edwards has been relentless in his efforts to document excessive pay for bureaucrats.

Since we're on this topic, let's enjoy some additional bits of data about the cushy life of our bureaucratic overlords.

In addition to lavish pay, federal employees also receive gold-plated benefits. Most of the money goes for pensions and healthcare, but you'll be happy to know the feds have also figured out more creative ways of pampering the protected class.

...a variety of federal agencies in a number of locations provide “free” yoga classes to employees. But these classes are not free; since 2013, they have cost taxpayers over $150,000. The State Department spends $15,000 for yoga in the nation’s capital. A yoga instructor in from Berkeley, California is paid $4,000 a year from the Department of Agriculture’s Research Service. Of course, the Department of Energy...has gotten in on taxpayer financed yoga; but for $11,000 annually they also offer pilates at a California location. ...The Railroad Retirement Board spends $11,000 annually for yoga classes for office workers at its Chicago headquarters.

And many federal bureaucrats have figured out how to enjoy another fringe benefit of federal employment.

By the way, the jab about "nobody gets fired" isn't 100 percent accurate.

But if you want lots of job security, then latch on to the federal teat.

Federal workers are far more likely to be audited by the IRS or get arrested for drunk driving than they are to be fired from the civil service payroll for poor performance or misconduct. The odds are one-in-175 for the IRS audit and one-in-200 for the drunk driving arrest, while the odds for a fed to be fired in a given year are one-in-500, according to the Government Accountability Office. ...Private sector workers face just the opposite situation. They have a roughly one-in-77 chance of being involuntarily terminated — the Bureau of Labor Statistics doesn’t distinguish between fires and layoffs — in a given month.

By the way, bureaucrats are sometimes forced into early retirement as "punishment" for misbehavior.

All things considered, though, we serfs shouldn't complain too much.

After all, would it be proper to grouse about a group that does superlative work?

In the ranks of the federal government, 99 percent are really good at their jobs — and almost two-thirds exceed expectations or do outstanding work.

That’s the conclusion of a new report by the Government Accountability Office, which also found that 78 percent of high-level civil servants — those in GS grades 13 through 15 — were given top performance scores of outstanding or fully successful....The glowing picture of everyone in calendar year 2013, the most recent data available to auditors, is...good news for federal agencies.

In reality, of course, these glowing performance reviews are highly suspect.

...a more likely reality to many in and outside of government. Rather than so many federal workers being exceptional, the system for rating them isn’t working right. ...Federal workers themselves have long complained in annual surveys that their agencies do not deal with poor performers, hurting morale and efficiency. Lawmakers complain that it is nearly impossible to fire these employees, but bills to take away some of their their rights to appeal bad reviews have languished in Congress. ...“Apparently the federal bureaucrats grading one another think virtually everyone who works for the government is doing a fantastic job,” Rep. Jeff Miller (R-Fla.), chairman of the House Committee on Veterans’ Affairs, said in a statement. “But given the dysfunction we’ve seen throughout the federal government over the last several years, that can’t possibly be true,” Miller said.

Of course it's not true.

Misbehavior and malfeasance at bureaucracies such as the IRS and VA doesn't prevent high ratings and generous bonuses. Instead, it's almost as if doing the wrong thing is a job requirement.