I've had some fun over the years by pointing out that Paul Krugman has butchered numbers when writing about fiscal policy in nations such as France, Estonia, Germany, and the United Kingdom.

So I shouldn't be surprised that he wants to catch me making an error. But I'm not sure his "gotcha" moment is very persuasive. Here's some of what he wrote for today's New York Times.

Gov. Jerry Brown was able to push through a modestly liberal agenda of higher taxes, spending increases and a rise in the minimum wage. California also moved enthusiastically to implement Obamacare. ...Needless to say, conservatives predicted doom. ...Daniel J. Mitchell of the Cato Institute declared that by voting for Proposition 30, which authorized those tax increases, “the looters and moochers of the Golden State” (yes, they really do think they’re living in an Ayn Rand novel) were committing “economic suicide.”

Kudos to Krugman for having read Atlas Shrugged, or for at least knowing that Rand sometimes referred to "looters and moochers." Though I have to subtract points because he thinks I'm a conservative rather than a libertarian.

But what about his characterization of my position? Well, he's right, though I'm predicting slow-motion suicide. Voting for a tax hike isn't akin to jumping off the Golden Gate bridge. Instead, by further penalizing success and expanding the burden of government, California is engaging in the economic equivalent of smoking four packs of cigarettes every day instead of three and one-half packs.

Here's some of what I wrote:

I’m generally reluctant to make predictions, but I feel safe in stating that this measure is going to accelerate California’s economic decline. Some successful taxpayers are going to tunnel under the proverbial Berlin Wall and escape to states with better (or less worse) fiscal policy. And that will mean fewer jobs and lower wages than otherwise would be the case.

Anyhow, Krugman wants readers to think that California is a success rather than a failure because the state now has a budget surplus and there's been an uptick in job creation.

Here's more of what he wrote:

There is, I’m sorry to say, no sign of the promised catastrophe. If tax increases are causing a major flight of jobs from California, you can’t see it in the job numbers. Employment is up 3.6 percent in the past 18 months, compared with a national average of 2.8 percent; at this point, California’s share of national employment, which was hit hard by the bursting of the state’s enormous housing bubble, is back to pre-recession levels. ...And, yes, the budget is back in surplus. ...So what do we learn from the California comeback? Mainly, that you should take anti-government propaganda with large helpings of salt. Tax increases aren’t economic suicide; sometimes they’re a useful way to pay for things we need.

I'm not persuaded, and I definitely don't think this counts as a "gotcha" moment.

First, I'm a bit surprised that he wants to brag about California's employment numbers. The Golden State has one of the highest jobless rates in the nation. Indeed, only four states rank below California.

Second, I don't particularly care whether the state has a budget surplus. I care about the size of government.

Krugman might respond by saying that the tax hike generated revenues, thus disproving the Laffer Curve, which is something that does matter to supporters of small government. But the Laffer Curve doesn't say that all tax hikes lose revenue. Instead, it says that tax rate increases will have a negative effect on taxable income. It's then an empirical question to figure out if revenues go up a lot, go up a little, stay flat, or decline.

And what matters most of all is the long-run impact. You can rape and pillage upper-income taxpayers in the short run, particularly if a tax hike is retroactive. In the long run, though, people can move, reorganize their finances, and take other steps to reduce their exposure to the greed of the political class.

In other words, people can vote with their feet ... and with their money.

And that's what seems to be happening in California. Take a look at how much income has emigrated from the state since 1992.

Next we have a map showing which states, over time, are gaining taxable income and which states are losing income. Notice that the zero-income tax states tend to be very green.

The data aren't population-adjusted, so populous states are overrepresented. But you can still see that California is losing while Texas is winning.

Here are similar data from the Tax Foundation: 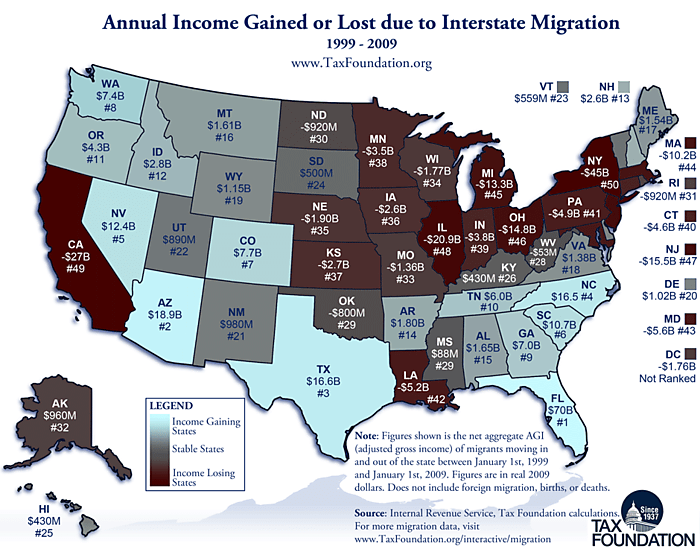 So what's all of this mean?

Well, it means I'm standing by my prediction of slow-motion economic suicide. The state is going to become the France of America—assuming Illinois doesn't get there first.

California has some natural advantages that make it very desirable. And I suspect that the state's politicians could get away with above-average taxes simply because certain people will pay some sort of premium to enjoy the climate and geography.

But the number of people willing to pay will shrink as the premium rises.

In other words, this Chuck Asay cartoon may be the most accurate depiction of California's future. And this Lisa Benson cartoon shows what will happen between now and then.

But I won't hold my breath waiting for a mea culpa from Krugman.