Knowing about Segregationist Housing Policy Is the First Step to Justice 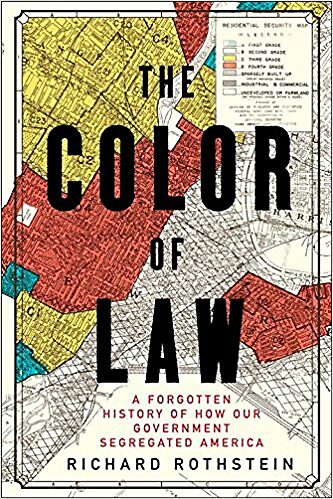 In education, there is a widespread belief: the federal government ended segregation. This is, of course, based on the Supreme Court’s landmark ruling in Brown v. Board of Education, and subsequent federal efforts to end segregated schooling. But as a sobering new book by the Economic Policy Institute’s Richard Rothstein makes clear, while all levels of government forced, coerced, or cajoled racial segregation through housing policy, the feds may have been the worst, and the crippling legacy of those actions may be much further reaching than even schooling policy.


The Color of Law: A Forgotten History of How Our Government Segregated America is essentially a catalogue of discriminatory housing policies perpetrated throughout the 20th Century, but peaking from the 1930s through the 1960s. It chronicles local injustices including police ignoring or even stoking mobs that tormented African Americans who dared buy a home in a white neighborhood, and states with segregationist intent mandating local referenda to approve low‐​income family public housing. But it is the federal government that seems to have had the most powerful hand in it all, if for no other reason than only it could sweep every American into the corners where it decided they did—or did not—belong.

Much of the major federal impact started with the New Deal and World War II. As Washington sought to provide housing first for the economically displaced, then for workers at newly opened arsenal‐​of‐​democracy factories, racial segregation was the norm. Rothstein examines the case of Richmond, California, not far from uber‐​progressive Berkeley where he lives. He writes:

From 1940 to 1945, the influx of war workers resulted in Richmond’s population exploding from 24,000 to more than 100,000. Richmond’s black population soared from 270 to 14,000….With such rapid population growth, housing could not be put up fast enough. The federal government stepped in with public housing. It was officially and explicitly segregated. Located along railroad tracks and close to the shipbuilding area, federally financed housing for African Americans in Richmond was poorly constructed and intended to be temporary. For white defense workers government housing was built farther inland, closer to white residential areas, and some of it was sturdily constructed and permanent. Because Richmond had been overwhelmingly white before the war, the federal government’s decision to segregate public housing established segregated living patterns that persist to this day.

Discriminatory poison was spread even more widely by Washington via housing assistance programs, especially Federal Housing Administration‐​backed loans that were awarded with relative ease for white people moving into white neighborhoods, or developers aiming to build housing for whites, while freezing out African Americans. Levittowns—massive developments of cookie‐​cutter houses that made thousands of people homeowners—illustrate the crippling consequences of discriminatory aid. While access to good, affordable housing had many immediate benefits, the long‐​term consequences of such access may have been even greater—accumulation of wealth:

By the time the federal government decided finally to allow African Americans into the suburbs, the window of opportunity for an integrated nation had mostly closed. In 1948, for example, Levittown homes sold for about $8,000, or about $75,000 in today’s dollars. Now, properties in Levittown without major remodeling…sell for $350,000 and up. White families who bought those homes in 1948 have gained, over three generations, more than $200,000.

While white homeowners were living in, essentially, little banks, African Americans were often renters, accumulating no equity, or owners of far less desirable houses. It is a major reason that African Americans typically have only a tiny fraction of the accumulated wealth of whites.


The question this shameful history inevitably leads to, of course, is what can we do to remedy its effects? But many, if not all, of the possible answers carry major unintended consequences, likely one reason that Rothstein is hesitant to propose any in the book. His other reason is that the vast majority of people likely have little if any knowledge of the history he recounts, and knowledge of the disease must precede a cure. Such ignorance may be manifested in the tendency to see Washington as a savior against all discrimination, or my own mental imagery of housing discrimination before reading this book, consisting of hazy apparitions of homeowners entering covenants against selling to African Americans, or realtors redlining neighborhoods, but no concrete government policies essentially requiring such things.


Rothstein only outlines some food‐​for‐​thought proposals, including the federal government buying for‐​sale houses in Levittowns at today’s prices and selling them to African Americans at the price their grandparents would have paid, or ending zoning requiring that homes be built only on large—and expensive—lots.


My own, still embryonic thought is that solutions may have to eschew overtly race‐​based remedies, even though the wrong we’re trying to right was indisputably grounded in race. Clichéd though it may seem, “two wrongs do not make a right” feels correct: moving from race‐​based preferences for whites to such preferences for African‐​Americans, even to ameliorate unquestionable racial injustice, seems unacceptable. We must have preferences for no race under the law, but rather equal treatment for all.


Perhaps more practically, we have seen powerful evidence with policies ranging from affirmative action to forced busing that race‐​based policies foster resentment and can ignite conflicts that may well make matters worse. We should also be clear‐​eyed that even if we tear down all barriers to housing integration we may not see much of it, at least not at first. Research has repeatedly found that people are strongly inclined to self‐​segregate. Indeed, even in schools where physical integration has largely been achieved, friendship groups are often decidedly homogenous.


Perhaps the solution is to focus not on policy prescriptions, but to constantly and powerfully educate the public about the massive injustice that has been done—the primary goal of Rothstein’s volume. Then change efforts should be concentrated on an avenue we too often forget: civil society—individuals voluntarily forming communities that take collective action, such as churches, Kiwanis clubs, Habitat for Humanity, or any other groups people freely choose to form. They could perhaps pool funds to help African Americans purchase homes, or reach out to black communities and say “consider moving where we live, and if you come we will greet you with open arms,” or other potential actions.


Does this feel satisfactory in light of the grave injustice that has been done? No. But it seems crucial that government cease putting its thumb on the scale for any race, both as a matter of principle and of practical effect. No one would be forced to help make things right, but they may well feel compelled. Compelled by the conviction, grounded in knowledge, that African Americans have been grievously wronged, and that we should all strive to set things, as closely as possible, right.