Want to increase college‐​going while saving some dough? Scholarship tax credit programs may be for you, or so indicates a new report from the Urban Institute. 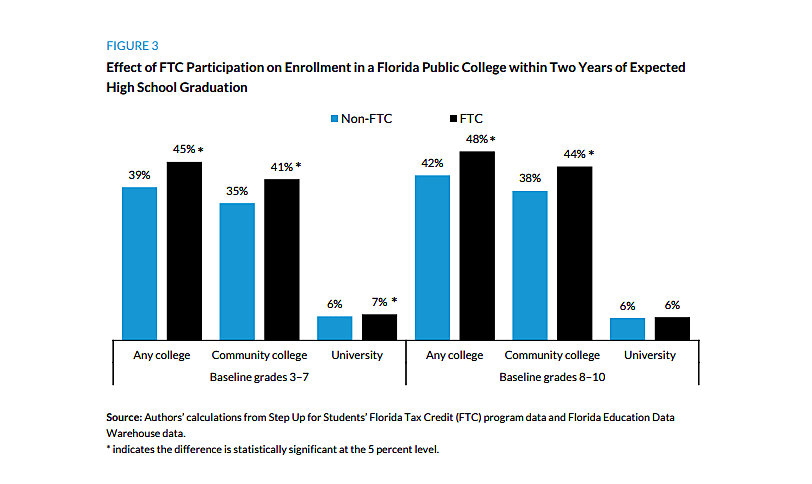 The report, from co‐​authors Matthew Chingos and Daniel Kuehn, finds that the low‐​income students who enrolled in private schools via the Florida Tax Credit scholarship program were about 15 percent—or 6 percentage points—more likely to enroll in college than statistically matched public school students. The effect was greater the longer kids were in the program. There was also a small, more tenuous positive effect on associate degree attainment for scholarship users. Topping it all off, while cost was not the focus of the report, the authors note that the superior outcomes were achieved at a saving to the state: “The positive effects are noteworthy in light of the evidence that the FTC program more than covers the foregone tax revenue through reduced spending on the public schools many participants would have attended.”


There are, of course, important caveats to the findings. First, this was not a random assignment study, so unobserved characteristics such as differing degrees of motivation between scholarship users and matched public school students could not be well controlled for. Next, the study only looked at students entering Florida public colleges, though this might have underestimated the program’s positive effects due to low‐​income private school students tending more to attend private or out‐​of‐​state colleges than their public school peers. Finally, there is good reason to question whether credentials represent much increase in real, useful, learning.


Even with these caveats, this is clearly encouraging evidence for school choice. Alas, some of the early media reports about the study seem to want to temper it with mentions of a few recent choice evaluations, focused on standardized test scores, that have not been so hot. Of course, those studies have important caveats too, but more important, the articles I have seen about the Urban report have mentioned the recent spate of negative reports while ignoring the many positive studies that preceded them. Fortunately, the Urban authors give readers one more useful nugget, noting, “Until recently, this research showed neutral to positive effects of private school choice on student achievement.”


The choice debate will continue, but most of the evidence remains on the side of freedom.