Jonah Goldberg’s Good Advice for the GOP: Confess Your Spending Sins and Repent

In a post last week, I explained that Obama has been a big spender, but noted his profligacy is disguised because TARP outlays caused a spike in spending during Bush's last fiscal year (FY2009, which began October 1, 2008). Meanwhile, repayments from banks in subsequent years count as "negative spending," further hiding the underlying trend in outlays. 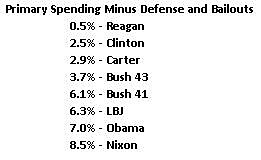 When you strip away those one-time factors, it turns out that Obama has allowed domestic spending to increase at the fastest rate since Richard Nixon.

I then did another post yesterday in which I looked at total spending (other than interest payments and bailout costs) and showed that Obama has presided over the biggest spending increases since Lyndon Johnson. 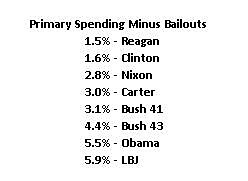 Looking at the charts, it's rather obvious that party labels don't mean much. Bill Clinton presided during a period of spending restraint, while every Republican other than Reagan has a dismal track record.

President George W. Bush, for instance, scores below both Clinton and Jimmy Carter, regardless of whether defense outlays are included in the calculations. That's not a fiscally conservative record, even if you're grading on a generous curve.

This leads Jonah Goldberg to offer some sage advice to the GOP:

Here's a simple suggestion for Mitt Romney: Admit that the Democrats have a point. Right before the Memorial Day weekend, Washington was consumed by a debate over how much Barack Obama has spent as president, and it looks like it's picking up again.

...[A]ll of these numbers are a sideshow: Republicans in Washington helped create the problem, and Romney should concede the point. Focused on fighting a war, Bush---never a tightwad to begin with---handed the keys to the Treasury to Tom DeLay and Denny Hastert, and they spent enough money to burn a wet mule. On Bush's watch, education spending more than doubled, the government enacted the biggest expansion in entitlements since the Great Society (Medicare Part D), and we created a vast new government agency (the Department of Homeland Security).

...Nearly every problem with spending and debt associated with the Bush years was made far worse under Obama. The man campaigned as an outsider who was going to change course before we went over a fiscal cliff. Instead, when he got behind the wheel, as it were, he hit the gas instead of the brakes---and yet has the temerity to claim that all of the forward momentum is Bush's fault.

...Romney is under no obligation to defend the Republican performance during the Bush years. Indeed, if he's serious about fixing what's wrong with Washington, he has an obligation not to defend it. This is an argument that the Tea Party---which famously dealt Obama's party a shellacking in 2010---and independents alike are entirely open to. Voters don't want a president to rein in runaway Democratic spending; they want one to rein in runaway Washington spending.

Jonah's point about "fixing what's wrong with Washington" is not a throwaway line. Romney has pledged to voters that he won't raise taxes. He also has promised to bring the burden of federal spending down to 20 percent of GDP by the end of a first term.

But even those modest commitments will be difficult to achieve if he isn't willing to gain credibility with the American people by admitting that Republicans helped create the fiscal mess in Washington. Especially since today's GOP leaders in the House and Senate were all in office last decade and voted for Bush's wasteful spending.

It doesn't take much to move fiscal policy in the right direction. All that's required is to restrain spending so that it grows more slowly than the private sector. (With the kind of humility you only find in Washington, I call this "Mitchell's Golden Rule.") The entitlement reforms in the Ryan budget would be a good start, along with some much-needed pruning of discretionary spending.

And if you address the underlying problem by limiting spending growth to about 2 percent annually, you can balance the budget in about 10 years. No need for higher taxes, notwithstanding the rhetoric of the fiscal frauds in Washington who salivate at the thought of another failed 1990s-style tax hike deal.