Last year, while writing about the corrupt and self-serving behavior at the IRS, I came up with a theorem that explains day-to-day behavior in Washington.

Simply stated, government is a racket that benefits the D.C. political elite by taking money from average people in America

I realize this is an unhappy topic to be discussing during the Christmas season, but the American people need to realize that they are being pillaged by the insiders that control Washington and live fat and easy lives at our expense.

If you don't believe me, check out this map showing that 10 of the 15 richest counties in America are the ones surrounding our nation's imperial capital.

Who would have guessed that the wages of sin are so high?

D.C., itself, isn't on the list. But that doesn't mean there aren't a lot of people living large inside the District.

Here are some interesting nuggets from a report in the Washington Business Journal:

D.C. residents are enjoying a personal income boom. The District’s total personal income in 2012 was $47.28 billion, or $74,733 for each of its 632,323 residents, according to the Office of the Chief Financial Officer’s Economic and Revenue Trends report for November. The U.S. average per capita personal income was $43,725.

Why is income in D.C. so much higher? Well, the lobbyists, politicians, bureaucrats, interest groups, contractors, and other insiders who dominate the city get much higher wages than people elsewhere in the country.

And they get far higher benefits:

Below is a chart from Zero Hedge comparing income growth for both D.C. and the nation as a whole over the last few decades. It uses median household income rather than total personal income, so the numbers don't match up exactly with the numbers from above. Regardless, it shows how D.C. income grew faster than the rest of the nation during the Bush years, and then even more dramatically during the Obama years. 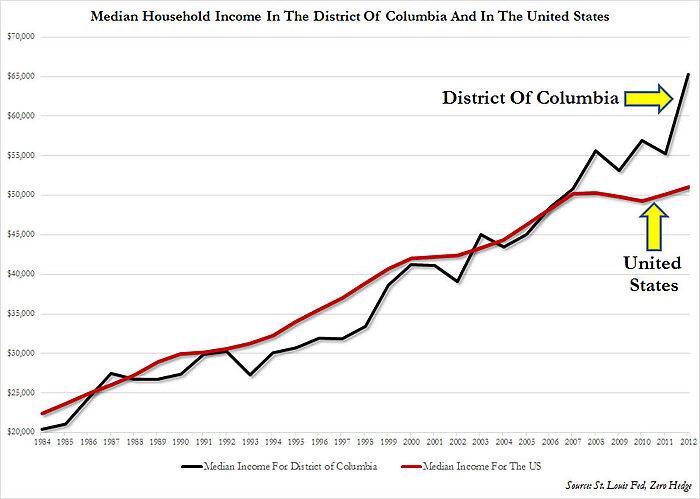 In other words, policies like TARP, the fake stimulus, and Obamacare have been very good for Washington's ruling class.

Want some other examples of profitable Washington sleaze? Here are some excerpts from Rich Tucker's column for Real Clear Policy:

The real place to park your money is in Washington, D.C. That's because the way to get ahead isn't to work hard or make things; it's to lobby Washington for special privileges. Look no further than the sweet deal the sugar industry gets. It's spent about $50 million on federal campaign donations over the last five years. So that would average out to $10 million per year. Last year alone, the federal government spent $278 million on direct expenditures to sugar companies. That's a great return on investment.

Big Corn may get an even better deal than Big Sugar:

Until 2012, the federal government provided generous tax credits to refiners that blended ethanol into gasoline. In 2011 alone, Washington spent $6 billion on this credit. The federal government also maintains tariffs (54 cents per gallon) to keep out foreign ethanol, and it mandates that tens of billions of gallons of ethanol be blended into the American gasoline supply. Nothing like a federal mandate to create demand for your product. How much would you pay for billions of dollars worth of largesse? Well, the ethanol industry got a steep discount. In 2012, opensecrets.org says, the American Coalition for Ethanol spent $212,216 on lobbying.

Rich warns that the United States is sliding in the wrong direction:

What makes Washington especially profitable is that its only products are the laws, rules, and regulations that it has the power to force everyone else to follow. ...[W]e seem to be sliding toward what the authors term "extractive" institutions. That means government [is] using its power to benefit a handful of influential individuals at the expense of everyone else.

And let's not forget that some people are getting very rich from Obamacare while the rest of us lose our insurance or pay higher prices.

This Reason TV interview with Andrew Ferguson explains that there is a huge shadow work force of contractors, consultants, and lobbyists who have their snouts buried deeply in the public trough:

I particularly like his common sense explanation that Washington's wealth comes at the expense of everyone else. The politicians seize our money at the point of a gun (or simply print more of it) to finance an opulent imperial city.

So if you're having a hard time making ends meet, remember that you should blame the crowd in Washington. 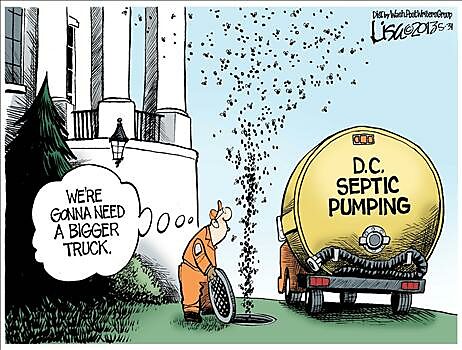 P.S.: Despite Republican claims of being the party of free markets and smaller government, the insider corruption of Washington is a bipartisan problem. Indeed, some of the sleaziest people in D.C. are Republicans.

P.P.S.: Though scandals such as Solyndra show that Obama certainly knows how to play the game.

P.P.P.S.: Making government smaller is the only way to reduce the Washington problem of corrupt fat cats.