Iran’s Search for a “Master of the Economy”

Iran’s Guardian Council announced yesterday that former president Ali Akbar Hashemi Rafsanjani has been barred from Iran’s presidency poll—reportedly due to his old age and debilitating health. In recent weeks, speculation over a Rafsanjani comeback bid had spurred some optimism among Iranians who recognize that their broken economy desperately needed a jolt. Some Iranian voters have described him as a “master of the economy” and the solution to their economic woes. However, a closer look at Iran’s misery index shows just how fatally flawed this perception is.

There is little doubt that the economic policies of current president Mahmoud Ahmadenijad have been a disaster. Even before the United States and European Union imposed economic sanctions over Iran’s nuclear program, Iran’s economy was hardly in good shape.

For decades, the Iranian economy has been cobbled together by a coalition of conservative clerics and Revolutionary Guard commanders. The resulting bureaucratic monstrosity has employed mandates, regulations, price controls, subsidies, a great deal of red tape, and a wide variety of other interventionist devices. Not surprisingly, Iran ranks near the bottom—145th out of 183 countries—in the World Bank’s Doing Business 2013 Ranking, which measures the vitality of free markets and the ease of doing business.

You might wonder, with all this sand in the gears, how has the Iranian economy been able to sustain itself and grow (until recently)?  The answer is—you guessed it—oil.

Returning to Rafsanjani—the so-called master of the economy—the record, as revealed by the Iranian misery index, suggests that he would not have been able to fix Iran’s current economic mess.  His time in office was, simply put, an economic failure.

So, just what is the Iranian misery index? The index is the sum of the inflation, interest and unemployment rates, minus the annual percentage change in per capita GDP. Iran’s misery index for the 1991-2012 period is presented in the accompanying chart: 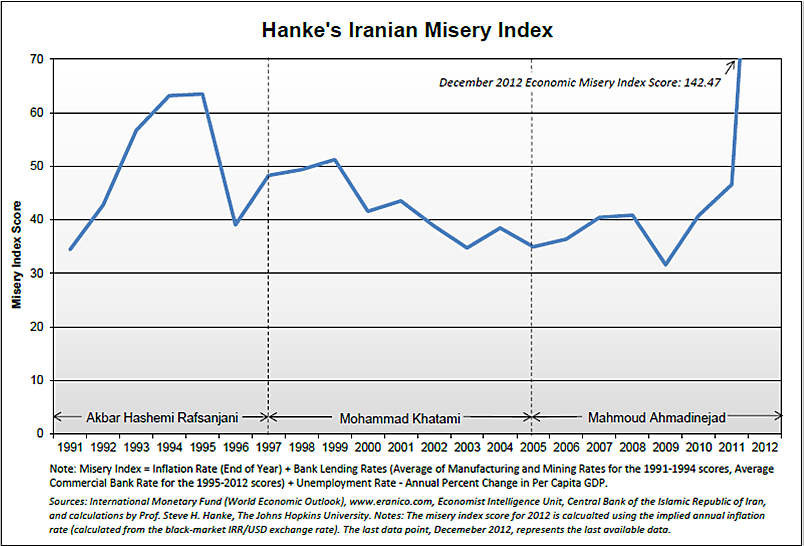 It must be stressed that Iran’s true inflation, interest, and unemployment rates are all probably higher than those reported by the government. In consequence, the true level of the misery index is probably much higher than the one reflected in the chart. That said, the pattern of “ups” and “downs” in the index is reliable.

Clearly, the Rafsanjani years were a bit of a rollercoaster ride, with a dramatic increase followed by a sharp reduction, and then a final up-tick in the level of economic “misery.”  By the end of his term, Rafsanjani had actually raised the misery index score from an initial 34.41 to 48.28—in short, during the Rafsanjani years, economic misery increased.  Indeed, high inflation rates and slow economic growth were the defining characteristics of his tenure in office.

Although current president Ahmadinejad has undoubtedly left the Iranian economy in shambles, Rafsanjani’s presidency was, in economic terms, hardly anything to write home about.