During yesterday’s Senate Select Committee on Intelligence (SSCI) confirmation hearing on Gina Haspel’s nomination to become director of the CIA, I noted on Twitter that the Army and the CIA had literally walked away from the lessons and successes on detainee/​POW interrogations learned during the 1991 Persian Gulf War. That prompted responses like this: 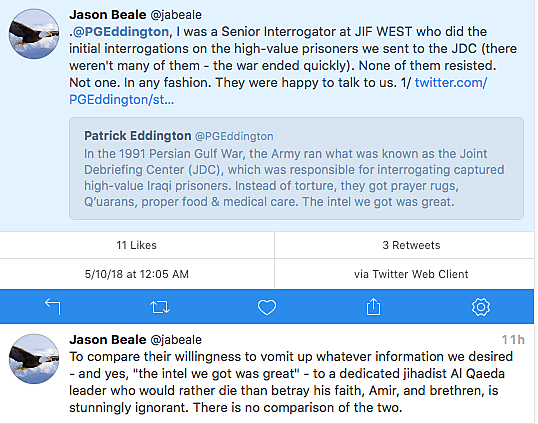 Fair critique or missing my point?


I agree with Beale that the circumstances of the capture of Iraqi soldiers and officers in the 1991 Gulf War were different than the rendition, detention, and interrogation (RDI) program run by the CIA, and the people (actual terrorists or innocents) swept up in it. But the notion that one group of captives (cooperative, captured Iraqi general officers) should be subjected to one standard while another group (uncooperative, captured alleged/​actual terrorists) should be subjected to a different, violent, and brutal standard is wrong–on moral, legal, and effectiveness grounds.


As Senator (and former tortured POW) John McCain (R-AZ) noted in 2014 when the SSCI Torture Report summary was released:

But in the end, torture’s failure to serve its intended purpose isn’t the main reason to oppose its use. I have often said, and will always maintain, that this question isn’t about our enemies; it’s about us. It’s about who we were, who we are and who we aspire to be. It’s about how we represent ourselves to the world.

The other refrain we’ve heard in the debate over Haspel’s nomination is the same one we’ve heard from torture proponents (like President Trump), namely that torture works. Let’s take another look at what the SSCI torture report summary had to say about the difference in results between the FBI and CIA interrogators when dealing with an alleged or actual “dedicated jihadist” that Mr. Beale describes. From p. 208 of that report:

As anyone who knows my work understands, I have lots of problems with the way the FBI often conducts itself. But there’s one thing that Bureau agents are generally quite good at–eliciting information, including confessions, from even hardened murderers. How much more useful, accurate information would we have received in the wake of the 9/11 attacks if the FBI had been responsible for all such interrogations? My guess is, a lot.


But there was a time when the Army itself–which has its own dark chapter on torture in the post‐​9/​11 era–knew how to do interrogations right. It’s what I was referring to in my tweet regarding the operations of the Army’s Joint Debriefing Center (JDC) during the Gulf War. While I was still at CIA, I filed a FOIA to try to get those reports released. Not surprisingly, in 1994 the Army wasn’t keen on doing so, but I did manage to get a heavily redacted version released, which you can read here.


One reason I filed the FOIA was that as an Army Reserve officer, I was deeply proud of how my fellow soldiers had comported themselves during the campaign. This extract from the Intelligence Information Report (IIR) titled “The Gulf War: An Iraqi General Officer’s Perspective” shows why: