Though I can assure you that wasn't the intention. Indeed, the article was written as part of the IMF's battle against tax competition. As you can see from these excerpts, the authors clearly seem to favor higher tax burdens on business and want to cartelize the global economy for the benefit of the political class.

...what’s the problem when it comes to governments competing to attract investors through the tax treatment they provide? The trouble is...competing with one another and eroding each other’s revenues...countries end up having to...reduce much-needed public spending... All this has serious implications for developing countries because they are especially reliant on the corporate income tax for revenues. The risk that tax competition will pressure them into tax policies that endanger this key revenue source is therefore particularly worrisome. ...international mobility means that activities are much more responsive to taxation from a national perspective... This is especially true of the activities and incomes of multinationals. Multinationals can manipulate transfer prices and use other avoidance devices to shift their profits from high tax countries to low, and they can choose in which country to invest. But they can’t shift their profits, or their real investments, to another planet. When countries compete for corporate tax base and/or real investments they do so at the expense of others—who are doing the same.

Here's the data that most concerns the bureaucrats, though they presumably meant to point out that corporate tax rates have fallen by 20 percentage points, not by 20 percent.

Headline corporate income tax rates have plummeted since 1980, by an average of almost 20 percent. ...it is a telling sign of international tax competition at work, which closer empirical work tends to confirm.

But here's the accidental admission that immediately caught my eye. The authors admit that lower corporate tax rates have not resulted in lower revenue.

...revenues have remained steady so far in developing countries and increased in advanced economies.

And this wasn't a typo or sloppy writing. Here are two charts that were included with the article. The first one shows that revenues (the red line) have climbed in the industrialized world as the average corporate tax rate (the blue line) has plummeted. 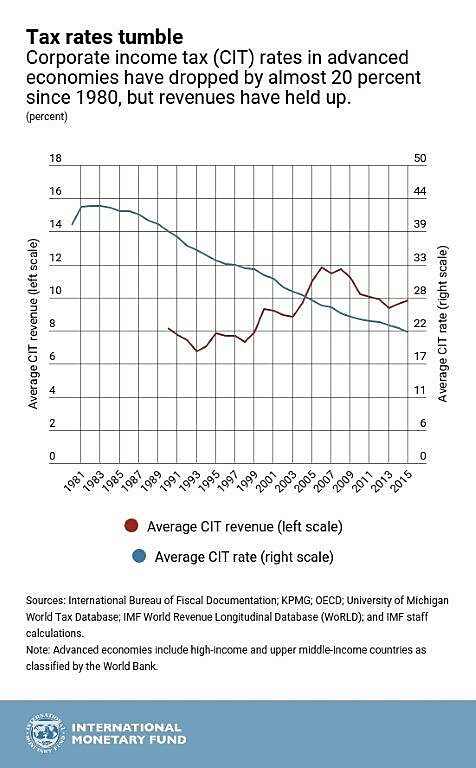 This may not be as dramatic as what happened when Reagan reduced tax rates on investors, entrepreneurs, and other upper-income taxpayers in the 1980, but it's still a very dramatic and powerful example of the Laffer Curve in action.

And even in the developing world, we see that revenues (red line) have stayed stable in spite of - or perhaps because of - huge reductions in average corporate tax rates (blue line). 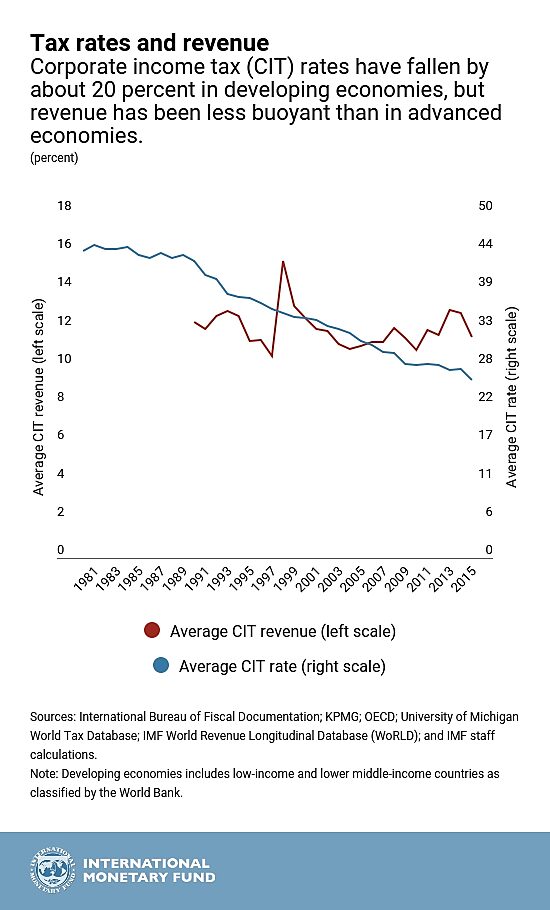 These findings are not very surprising for those of us who have been arguing in favor of lower corporate tax rates.

But it's astounding that the IMF published this data, especially as part of an article that is trying to promote higher tax burdens.

It's as if a prosecutor in a major trial says a defendant is guilty and then spends most of the trial producing exculpatory evidence.

I have no idea how this managed to make its way through the editing process at the IMF. Wasn't there an intern involved in the proofreading process, someone who could have warned, "Umm, guys, you're actually giving Dan Mitchell some powerful data in favor of lower tax burdens"?

In any event, I look forward to repeatedly writing "even the IMF agrees" when pontificating in the future about the Laffer Curve and the benefits of lower corporate tax rates.