President Trump is done cooperating with the House impeachment inquiry, White House Counsel Pat Cipollone announced yesterday in a letter that reads like the lawyerly version of a primal scream. “Your unprecedented actions have left the President with no choice,” he told the House Democratic leadership: the Trump administration “cannot participate in your partisan and unconstitutional inquiry under these circumstances.” We’re done here: It’s a “full halt,” full stop. 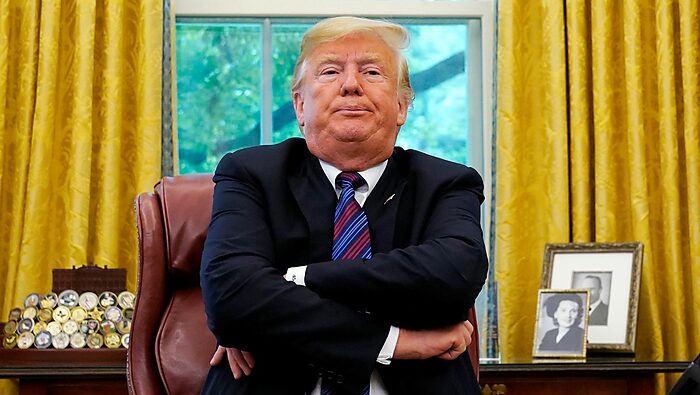 Does Donald Trump actually want to be impeached? There’s been some speculation along those lines recently. But the fact that the president seems to be having a Nixon‐​style, talking‐​to‐​the‐​portraits nervous breakdown live over social media makes me skeptical that’s the plan—or that there’s any plan at all. Still, if Trump wants to become the third American president to earn that ignominious distinction, this would be a great way to go about it.

The categorical stonewall Trump just announced is clearly an impeachable offense. There’s precedent for it in the Nixon case. One of the articles of impeachment that drove the 37th president out of office (he quit before the full House could vote) was based on disobeying congressional subpoenas and making bogus executive privilege claims. Article III against Nixon, passed by the House Judiciary Committee on July 30, 1974, charged the president with having “failed without lawful cause or excuse to produce papers and things as directed by duly authorized subpoenas” issued by the Judiciary Committee, “thereby assuming to himself functions and judgments necessary to the exercise of the sole power of impeachment vested by the Constitution in the House of Representatives.” In other words, Nixon’s resistance to lawful demands for evidence in an impeachment inquiry was itself grounds for impeachment.

And, at least at first, Nixon’s obstructionism wasn’t as flagrant as the policy Trump has announced. The basis for Article III was Nixon’s partial, selective, and duplicitous compliance with congressional demands for information. (It wasn’t until late May 1974, less than three months before he resigned, that Nixon announced no further demands would be answered, on the grounds that “the Committee has the full story of Watergate.”) As the Judiciary Committee’s Report on the Nixon impeachment noted, of dozens of federal officers who’d been the subject of impeachment investigations up till that time “not one of them challenged the power of the committee conducting the investigation to compel the evidence it deemed necessary.” Even President Andrew Johnson—who might have had better cause to complain of a “kangaroo court”—never “asserted any privilege to prevent disclosure of presidential conversations to the Committee, or failed to comply with any of the Committee’s requests.”

How, then, should the House respond to President Trump’s uber‐​Nixonian intransigence? Cipollone’s letter is mostly bluster and nonsense, confusing impeachment with a criminal process and demanding due process protections unavailable to grand jury targets actually at risk of losing their liberty instead of, as in Trump’s case, merely being put out of a job.

Still, the White House Counsel has half a point when he argues that the full House should honor past practice by voting for an impeachment inquiry. Nothing in the Constitution requires that move; but even so, the Speaker should make a concession to the administration’s newfound concern for “norms.” Hold the vote—and give the minority subpoena power (Maybe they’ll call Hunter Biden. That could be fun).

Would those concessions end the impasse? Even while demanding them, administration flacks “refuse to say what it would take for them to comply,” as CNN’s Kevin Liptak reported last night: “We don’t want to speculate on what would happen in various hypothetical situations.”

Earlier tonight, the president signaled he might soften his position “if Republicans get a fair shake.” But if the House calls his bluff, he may well move the line, coming up with a new excuse for stonewalling. “That rationalization is no longer operative,” as Nixon press secretary Ron Ziegler might have put it, “this is the operative rationalization.” If so, many self‐​proclaimed “constitutional conservatives” will follow along, adopting their own rationalizations—“well, he hasn’t defied the Supreme Court yet. Anyhow, I can stop any time I want to”—like junkies bargaining with themselves.

“You have left the President no choice,” Cipollone writes in the memo. The administration’s policy of massive resistance may in turn leave the House no choice. As the HJC Report explained in 1974, “Unless the defiance of the Committee’s subpoenas under these circumstances is considered grounds for impeachment, it is difficult to conceive of any President acknowledging that he is obligated to supply the relevant evidence necessary for Congress to exercise its constitutional responsibility.”