The Center for Immigration Studies (CIS) has been releasing a series of reports claiming that immigrants are benefiting from the slightly recovering job market while natives are not.  Of course, if immigrants were even less likely to gain jobs than Americans, CIS would use that as evidence that immigrants are a drain on the economy.  No matter.

The implicit assumption in CIS’ publications is that if those millions of immigrants weren’t working in the United States, more native-born Americans would have jobs – a static view of the economy.  CIS’ fixed pie implication is inappropriate to any kind of reasonable economic analysis of the effects of immigration on the labor market.  That is the primary reason why labor economists do not use CIS’ methods when attempting to measure the labor market impacts of immigration.  Even if CIS’ numbers were compiled correctly, they are not measuring anything useful.

A large body of academic economic research has found that immigration has a relatively small effect on U.S-born American wages and their employment prospects.  For wages impact, the estimates are that immigrants either lower the wages of some American workers by about 2 percent or raise them by about 2 percent in a dynamic economy (this, this, and this).  The employment effects vary little but, like wages, the effects are small and clustered around zero.  Nowhere will you find a tradeoff where one additional immigrants means that one American loses a job in the economy.

The CIS papers make no counterfactual dynamic economic estimates of the strength of the labor market without immigrants.

Here are some additional facts you won’t see in CIS’ papers:

Unemployment rates for the native born and immigrants move in the same direction with a correlation coefficient of 0.92.  Immigrants and natives tend to cluster in different occupations but the unemployment rate for both groups is very similar over time.  They both respond to a growing or shrinking labor market. 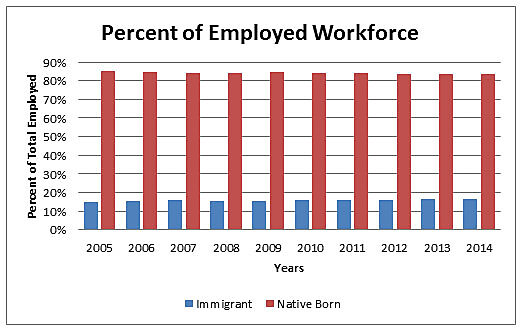 The job market also looks pretty poor for all workers. 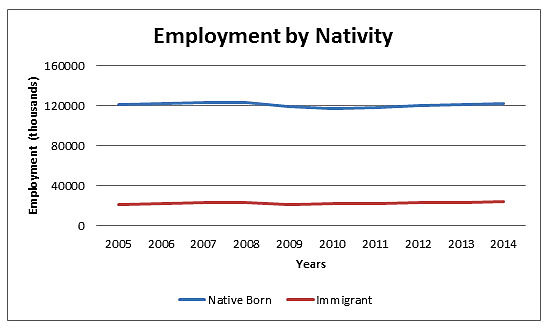 Most employment gains since 2010, the depths of the Great Recessions, have gone to natives.  But immigrants have also done pretty well considering their lower percentage of the population and workforce.  There are several reasons why this could be true.  Immigrants are much less likely to have access to unemployment insurance and other means tested welfare programs, so their reserve wages are lower – meaning they’re willing to re-enter the labor force for a lower wage rather than stay unemployed.  Welfare discincentivizes some unemployed Americans from reentering the workforce.  And Immigrants are more mobile than similarly skilled native-born workers.

A new NBER working paper by Brain C. Cadena and Brian K. Kovak observed that low skilled workers were disproportionately affected by job losses during the Great Recession and are typically the least mobile workers – meaning they do not move very far for new low skilled job openings.  They found no measurable shift in the local supply of native-born low skilled workers with a high school degree or less in response to declines in the number of local jobs.  Low skilled Mexican born workers are the exception – they are the most mobile workers in the United States.  Between 2006 and 2010, Cadena and Kovak found that a 10 percentage point larger employment decline drove a 7.6 percentage point larger decline in population for Mexican workers in local labor markets, all else remaining equal.  The same employment decline drove a 5.3 percentage point decline in local population for highly skilled workers.  As discussed already, the native low skilled population did not move in response to changes in the local labor market.

Mobility is influenced by the availability of welfare benefits, but many immigrant are self-selected for mobility – they did move here from another country after all so they are less tied down to any particular region of the United States.  Immigrant labor mobility smoothens labor markets over geographical areas and has other benefits, and it likely explains some of their job gains. 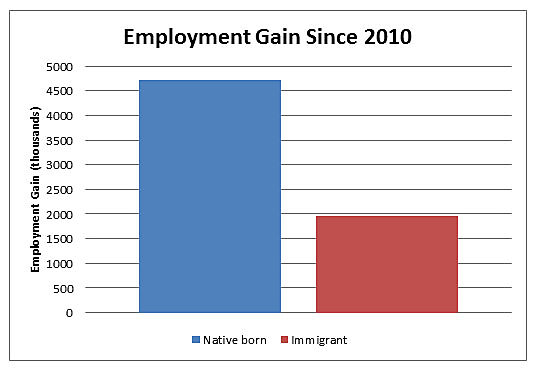 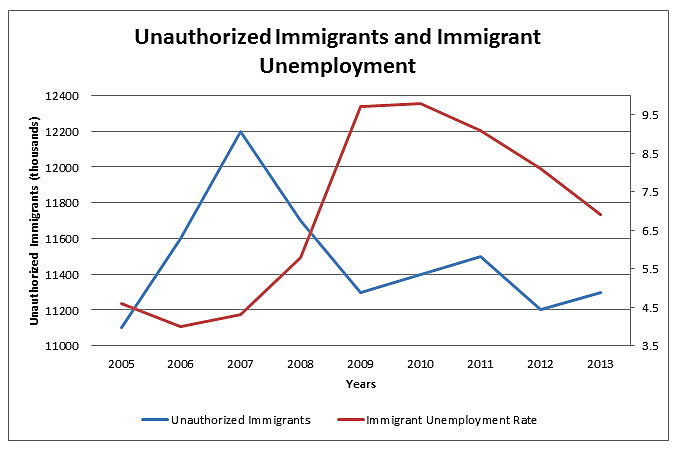 The CIS papers do not attempt any type of regression analyses or to analyze the effects of immigration on a dynamic labor market.  What would happen to the labor market if millions of immigrant workers, consumers, and entrepreneurs disappeared?  The CIS report sheds zero light on that despite a vast peer-reviewed academic economics literature that finds immigrants are attracted to growing economies and improve them once they arrive.