Immigration Does Not Decrease Economic Freedom

Since 1980, wealthy countries have seen rises in immigrant populations.  Immigrants are drawn to economic prosperity, higher wages, and better standards of living so it’s not surprising that wealthier countries have higher percentages of immigrants.  I excluded numerous small countries and petro-states like the UAE and Kuwait from the analysis.

I looked at the 25 wealthiest nations in the world in 1980 (by per capita GDP PPP) and considered their economic freedom rating and the percent foreign born.  I then tracked those same countries every 5 years until 2010.  Here are the averages for all 25 nations:

And when we zoom in on the United States: 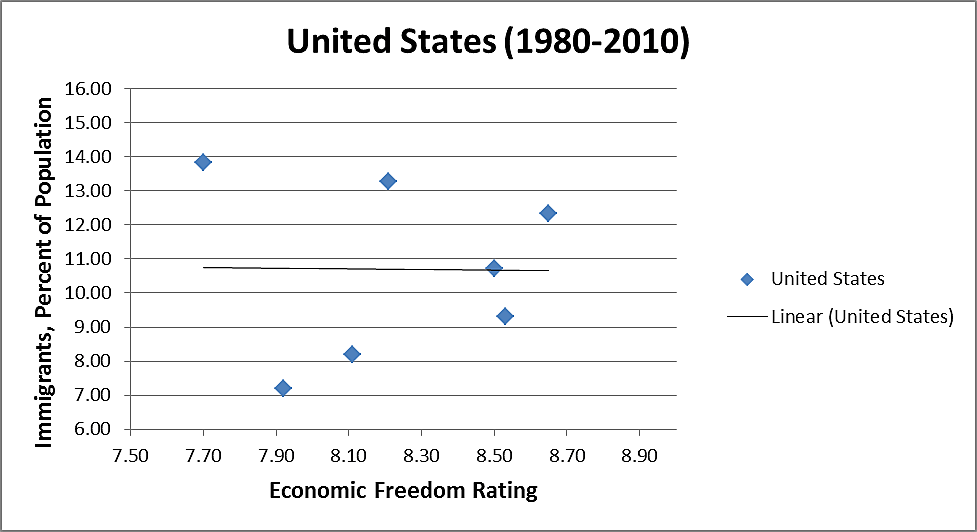 Excluding small countries, here are the wealthiest nations in the world in 1980:

In 1980, 9.4 percent of people living in all countries (including small ones like Monaco and the United Arab Emirates) were immigrants, compared to 10.1 percent in the richest countries.  The average economic freedom rating in the world was 5.4 compared to 6.27 for the richest.  In 1980, the 25 richest countries in the world had more immigrants and more economic freedom than the average nation.

These results are not surprising.  To the extent that economic freedom produces greater economic prosperity, immigration will likely increase.  Given the results from the regression analysis, there is practically zero evidence that immigrants have caused a decline in economic freedom.  Other factors, such as an increase in the regulated state, likely explain changes in economic freedom more than the intensity of immigration.

Opposing immigration reform for the reason that new immigrants will decrease economic freedom is a popular excuse in some circles – but there is surprisingly little evidence to support this myth.  Moreover, merely pointing out that immigrants are more likely to vote for the Democratic Party is insufficient because actual policy shifts count more than partisan political outcomes.  Those who claim immigrants will decrease economic freedom have yet to prove it.

Upcoming: A comparison between economic freedom in American states and immigration.