Donald Trump’s campaign has certainly galvanized feelings of nationalism and patriotism.  John Fonte and John O’Sullivan even wrote that Trump’s election victory represent a “return of American nationalism.”  It’s no coincidence then that he spoke about immigration as much as he did.  There is a common belief that immigrants and their descendants are less patriotic than other Americans. Yet rarely do proponents of this idea bring facts to the table to support their claims.

A prominent academic paper by Jack Citrin and others challenges the idea that Hispanic Americans are less patriotic.  On the opposite side, responses from a Harris Interactive Survey purport to show less patriotism among immigrants.  Fortunately, the General Social Survey asks many questions about patriotism in 2004 and 2014.  The questions generally show that immigrants and Hispanics have patriotic feelings virtually identical to those of other Americans.

The first question is:  “How much do you agree or disagree with the following statement:  Generally speaking, America is a better country than most other countries.”  The responses show a remarkable consistency across the four groups of all immigrants, all natives, all Hispanics, and all non-Hispanics (Figure 1).  The last two combine those who are foreign-born and native-born.   Those four groups all have almost exactly the same opinion on whether America is better than most other countries.

Figure 1: America Is a Better Country than Most Other Countries

The second question is: “How much do you agree or disagree that strong patriotic feelings in America are needed for America to remain united?”  This question judges whether immigrants and Americans even care about patriotism anymore, a concern for those concerned about patriotic assimilation.  The responses between immigrants and natives do vary in this question (Figure 2).  Virtually all of the difference is between whether they “strongly agree” or just “agree” (Figure 3).  Immigrants and Hispanics are about as likely to “strongly disagree” or “disagree” with the statement.

Figure 2: Patriotic Feelings Are Needed for America to Remain United 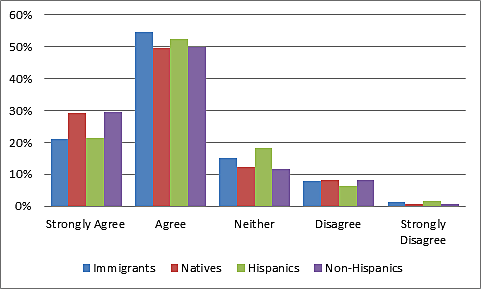 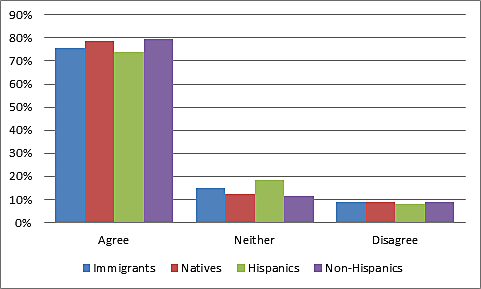 The third question is, “How much do you agree or disagree that strong patriotic feelings in America strengthen America's place in the world?”  This is a natural follow-up question that seeks to understand how the respondents view the utility of patriotism.  The responses show that immigrants and Hispanics are less likely to “strongly agree” but more likely to “agree” with the statement compared to natives and non-Hispanics (Figure 4).  The difference disappears entirely when the responses are shrunk to just “agree,” “neither,” or “disagree” (Figure 5). 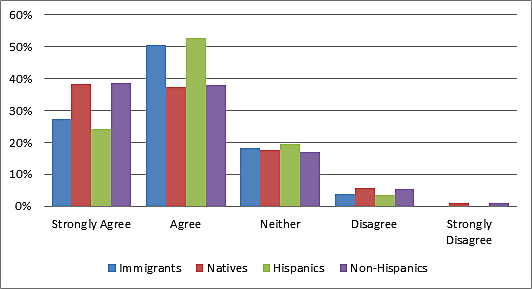 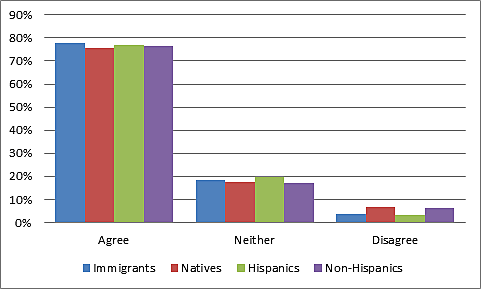 The last two questions concern the potential downsides of patriotism.  If immigrants or Hispanics are more likely to see the costs of patriotism then they might be less willing to be patriotic either now or in the future.  The next question asks whether the respondents agree that patriotism leads to intolerance amongst Americans.  The responses are virtually identical among all of the groups surveyed (Figure 6).  Immigrants and Hispanics see about as much of a downside to patriotism as natives and non-Hispanics do. 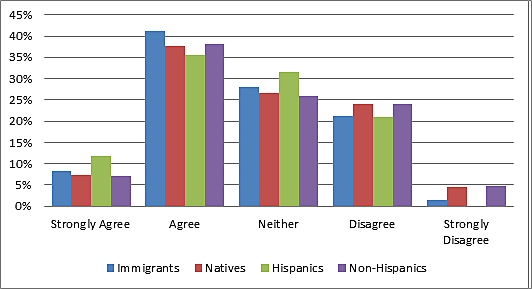 The last question is the most personal.  It asks whether respondents agree that patriotism leads to negative feelings about immigrants.  Immigrants and Hispanics either do not connect opinions that are anti-Hispanics or anti-immigration to patriotism, do not believe such a connection actually exists, or they do not care as they appear to have the exact same opinions as the rest of Americans on that issue (Figure 7). 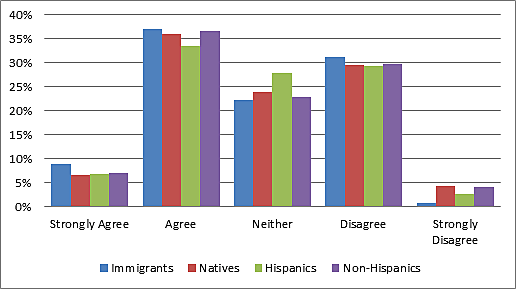 The number of Hispanic respondents is small in every question so their responses should be taken with a grain of salt.  Furthermore, controls for age, education level, and geography would help to create a complete picture of patriotic feelings but the number of respondents in this portion of the General Social Survey limits that type of analysis.  Based on the data here, immigrants and Hispanics look about as patriotic as other Americans.