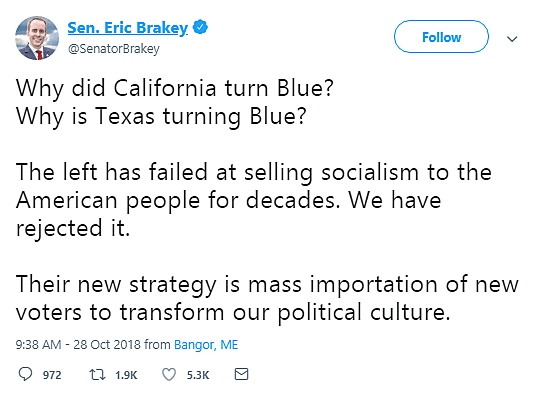 There is much to object to here, but I’ll focus on this fact: California is not blue because of immigrants. In the 2016 election, for example, naturalized citizens cast 18.1 percent of the vote, according to the Voting and Registration Supplement to the Census’s Current Population Survey (CPS). The CPS doesn’t ask how they cast their votes, but even if every single naturalized citizen voter cast their ballot for Hillary Clinton, Trump still would have received 38 percent fewer votes in the state than Clinton if Brakey’s disenfranchisement plan went through.

The voter registration information in the Public Policy Institute’s 2017 survey indicates that naturalized citizens in California voted about 78 percent for Hillary Clinton, 19 percent for Trump, and 3 percent for other candidates. That is definitely a significant benefit to Democrats, but as Figure 1 shows, naturalized citizens would not have affected the outcome of the election. Hillary Clinton still would have won California in a landslide. A forced exodus of every immigrant voter in California would move from a D+30 state to a D+24 state.

Brakey might respond that this fails to consider the children of immigrants, who opponents of birthright citizenship contend are not real Americans. In 2016, there were about 1.7 million votes for president by children with two foreign‐​born parents, according to the CPS. We again don’t know exactly for whom they voted in 2016, and we don’t have a California‐​specific political identification survey for them, but using the General Social Survey party identification for all 2nd generation Americans, we can conclude that at most 63 percent voted for Hillary and 36 percent for Trump. Figure 2 shows the difference between the 1st, 2nd, and 3rd generations in California. Even without immigrants and their children, Trump still would have lost.

Another fundamental problem with the immigration‐​turned‐​California‐​blue theory is that California has had a unified Democratic legislature almost continuously since 1959, so it was already a blue state. But nativists are right that something did happen in the mid‐​1990s that made Republicans much less competitive in statewide elections. In the three elections from 1990 to 1994, Democrats received an average of just 47 percent of the votes in statewide races for president, senate, governor, lieutenant governor, and attorney general (Figure 3). In the following three elections from 1996 to 2000, they received 54 percent. From 2002 to 2006, they fell back to 52 percent (thanks entirely to Arnold Schwarzenegger’s boost to the GOP), but Democrats’ results have shot up since, hitting 59 percent in the most recent three elections.

So what happened? Immigration clearly doesn’t explain it. Republicans would still lose California without any 1st and 2nd generation Americans, let alone just those who became citizens after 1994. Taking out the net increase of 1.9 million 1st and 2nd generation voters from 1996 to 2016 would have lowered the Democratic share by just 2 percentage points in the 2016 election.

But just because immigrants don’t make California blue doesn’t mean that immigration politics didn’t play a role. California Republicans went from competitive statewide to big losers at exactly the time that Governor Pete Wilson decided to blame immigrants for the state’s budget problems and campaigned for Proposition 187 in 1994, which would have required state officers to report illegal immigrants to the federal government as well as ban public services to them. Wilson did win reelection in 1994 during a record year for Republicans nationwide, but the California GOP never recovered.

My colleague Alex Nowrasteh has documented the now‐​extensive evidence that Wilson’s nativist campaign turned off Hispanic voters. This includes not just naturalized but also 2nd, 3rd, and 4th generation Hispanics. Wilson received nearly half of the Hispanic vote in 1990, but only a quarter in the 1994 election, and the GOP share remained low thereafter. But it was not just Hispanic voters who stopped voting GOP. Non‐​Hispanic whites also turned against Republicans at the same time, leading to a near total collapse in the state GOP.

As seen in Figure 4, Shaun Bowler, Stephen P. Nicholson and Gary M. Segura document the change in party identification following Prop. 187 (1994) and its successors Prop. 209 (1996) and Prop. 227 (1998). The share of Hispanics identifying as Democrats moved from 38 percent to 63 percent, while non‐​Hispanic whites moved from 30 percent to 37 percent, leading to a 14 percentage point swing against the GOP among whites.

Naturalized citizens and the children of immigrants certainly contribute to Democratic Party success in California, but they are not responsible for it. If Republicans want to win in the state, they need to realize that their rhetoric and policies on immigration not only offend new immigrant families in the state but also many Americans whose ancestors came to America during earlier waves, especially when public polling shows that Americans have never been more pro‐​immigration than they are right now. This has made the GOP far less competitive in California, and it may also have contributed to the exceptionally close Senate race in Texas this year. Rather than blaming immigrants for their failures, Republicans who want to reverse these trends should craft inclusive messages and policies that appeal to Americans regardless of the ancestry.