How Much Defense is Enough? The Outlier’s Take

A new study from the Center for Strategic and Budgetary Assessments, “How Much is Enough? Alternative Defense Strategies,” reports on military spending plans produced by teams from five think tanks, including Cato. CSBA asked each team to use its “Strategic Choices” software to make hundreds of choices amounting to a ten-year budget plan for the Pentagon and to provide a brief statement of their strategic rationale. The report includes those rationales, summaries of each budget, and comparative analysis of them.

As you can tell from the chart below, the Cato team’s answer was that way less is enough. We cut $1.1 trillion over the period. We’d have cut even more had the software allowed us to target all the spending going to “Overseas Contingency Operations,” intelligence programs and nuclear weapons. You can also see that our plan was the outlier. The others all raised spending—in AEI’s case, massively, by $1.3 trillion. 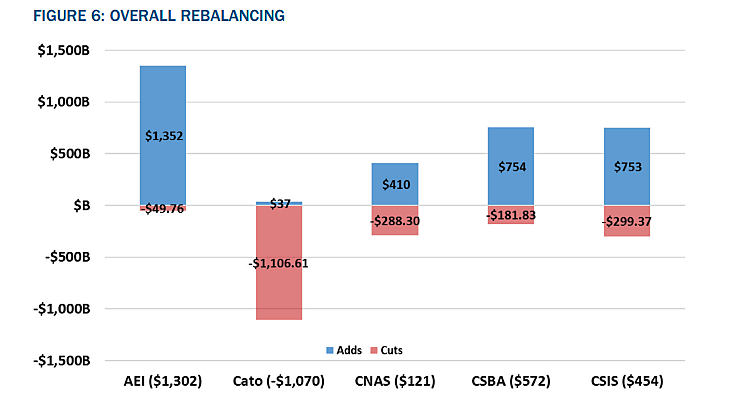 Why did our budget so diverge from the others? The simple answer is that our defense strategies diverge. Our teams’ choices follow a grand strategy of restraint. The others differ on details but accept the current grand strategy of primacy or liberal hegemony, which holds that U.S. security requires global stability maintained everywhere by U.S. military activism—alliances backed by garrisons and threats, naval patrols, and continual warfare, at least. As we put it in the report, the restraint strategy follows from four underlying claims:

First, U.S. geography, wealth, and technological prowess go far to secure the United States from attack, especially considering our historically weak enemies. Second, we should generally avoid wars meant to stabilize fractured states or to liberalize oppressive ones because they tend to backfire at tragic cost. Third, while allies can be useful in balancing the power of a threatening hegemon, like Nazi Germany or the Soviet Union, alliances should not be permanent. Today no such threat exists, and vast chunks of U.S. military spending goes to maintaining forces meant to defend states that can afford to defend themselves. Our protection can also encourage allies to avoid accommodating rivals and instead to heighten conflicts that can entangle U.S. forces. Fourth, while U.S. forces, especially the Navy, should protect trade routes from disruption during conflict, almost nothing threatens peacetime trade. Overseas garrisons and naval patrols are not needed to protect it.

The other groups’ shared desire to increase spending reflects rejection of those claims—with some dissent on the second.

Their budgets also suggest a deficiency of primacy. Strategy, by definition, is logic for choice, a means to prioritize resources. In defense, that means choosing among threats to confront, types of warfare, and weapons programs. Because primacy sees U.S. military power as necessary to peace everywhere, it suggests a force that is always busy and nearly ubiquitous—either present or capable of being there fast. Primacy is then less a strategy than a sophisticated way of answering “faster, better, more” whenever military spending choices arise. That’s one reason why the other groups increase spending and say little about what our military can safely not do.

A more general explanation for the plans’ divergence is the complexity of defense budgeting. It is impossible to precisely calculate how much defense is enough, let alone achieve agreement on a figure. In his classic work on the subject, Warner Schilling attributes the difficulty to uncertainty—about future threats, what defense goals best meet threats, which military means best serve those goals, and how to compare the value of military and other spending. The result of this complexity, Schilling writes, is that:

A multiplicity of answers, all of them “right,” must be admitted to the question of how much it is rational to spend on defense. The opportunities for reasoned and intelligent conflict with regard to the factual premises involved are legion. The questions of value involved are, in the final analysis, matters of personal preference…Choice is unavoidable: choice among the among the values to be served, and choice among the divergent conceptions of what will happen if such and such is done. It is for this reason that the defense budget, while susceptible to rational analysis, remains a matter for political resolution.

The report’s competing expert advice shows why the question of how much defense is enough is best answered through democratic politics, not military judgement or expert analysis, even ours. Outside expertise is useful less as guidance for policy choice than to frame it by revealing tradeoffs that political rhetoric obscures.

The report’s conclusion points to a current example. Congressional leaders and the president-elect suggest that global military dominance and fiscal prudence, even liberally defined, are compatible. They aren’t. That’s one point of agreement among the report’s contributors, at least.