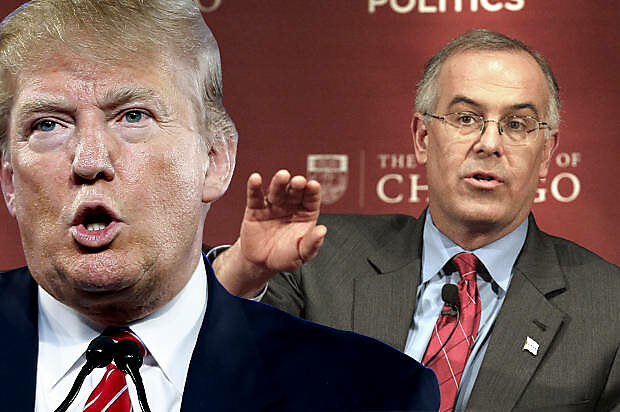 The ugliness of this year’s presidential race makes The New York Times’ resident erstwhile conservative David Brooks wistful for Barack Obama. The irony is that David Brooks, Barack Obama, and their respective tribes bear much of the responsibility for the rise of Donald Trump.

“I miss Barack Obama,” Brooks laments, because “over the course of this campaign it feels as if there’s been a decline in behavioral standards across the board.” Brooks cites Hillary Clinton’s emails and some other stuff, but everyone knows he’s talking about The Donald. “Many of the traits of character and leadership that Obama possesses, and that maybe we have taken too much for granted, have suddenly gone missing or are in short supply. The first and most important of these is basic integrity. The Obama administration has been remarkably scandal-free.” By the time he’s done, Brooks upgrades Obama’s integrity to “superior.”

We all have difficulty seeing our blind spots. That’s why we call them what we call them. But Brooks’ obliviousness here is awe-inspiring.

Donald Trump has risen to the top of the GOP presidential field by appealing to resentments stoked by both political tribes. Even Brooks is even doing it, right there in his column.

Trump is riding resentments Obama has stoked by ruling as an autocrat. Rather than accept that voters elected a Republican Congress for the purpose of restraining his ambitions, Obama famously boasted he can act without Congress, because "I’ve got a pen and I’ve got a phone."

He has repeatedly circumvented the democratic process and he knows it, as when he boasts, “I just took an action to change the law.” When challenged, he tries (with some success) to intimidate courts into writing tortured opinions in his favor. Still his executive overreach has been on the losing end of more unanimous Supreme Court rulings than either of his two immediate predecessors. Even allies admit he plays fast and loose with the rule of law.

When a president doesn’t play by the rules, he is telling his political opponents their votes don’t matter. That breeds resentment.

If you identify as a Democrat (and haven’t stopped reading in disgust), this is the part where you shout, “Don’t even talk to me about President Obama! Republicans are WORSE!! Bush started an immoral war!!” You know what? You’re right. And we’ll get to conservatives in a moment.

But if you are thinking such thoughts, then you have just revealed that you—yes, you—are responsible for the rise of Donald Trump.

If you give Obama a pass when he is dishonest or breaks the rules, because he seems like a good man, or is at least better than those guys; if you argue he had to change the law himself because Congress is dysfunctional and Republicans are unreasonable; if you lambast Bush for starting a war, but give Hillary a pass for both Iraq and Libya; then you are adopting one set of rules for your tribe and another set of rules for everyone else. That shows a lack of respect for people who disagree with you. They notice. They resent it.

And in swoops The Donald.

Trump is likewise riding the resentments conservatives have stoked of immigrants and Muslims. Millions of peaceful, hardworking immigrants are living in the United States in violation of America’s stupid and immoral immigration laws. There is definitely something wrong with this picture. But every time conservatives complain about those good people instead of those immoral laws, they turn immigrants into the “other” and encourage voters to blame immigrants for that and whatever other problems come to mind. When conservatives denounce as “amnesty” legislation that would free decent human beings from a greater threat to liberty than most conservatives will ever face from their government, they further stoke resentment of immigrants. In the process, conservatives encourage people who care about immigrants to turn a blind eye toward bad behavior by the other team, because at least that team seems to value the freedom and dignity of immigrants. And so conservatives stoke a vicious cycle of resentment.

Brooks doesn’t realize it, but he too is stoking resentments from which Trump draws power like Superman basking in the glow of the Earth’s yellow sun.

In putting Obama on a pedestal—“Obama radiates an ethos of integrity, humanity, good manners and elegance”—Brooks shows a remarkable gift for ignoring the president’s flaws. At the same time he criticizes Hillary Clinton’s “vaguely shady shortcuts” and the “unsightly characters floating around…the Clinton camp,” he blesses “team Obama” for successfully blocking such characters from the administration. Earth to David Brooks: Clinton took those shortcuts while she was Obama’s secretary of state. “Obamacare took coverage away from only a small minority of Americans,” Brooks writes, evidently unaware that the president repeatedly and knowingly lied about that part of ObamaCare.

Obama possesses “a sense of basic humanity,” Brooks writes, because he gave “a wonderful speech” at a mosque. I liked what I heard of that speech. But what about the innocent Muslim women and children Obama has killed with drone strikes, who far outnumber the number of children killed in Newtown, Connecticut? Or the fact that Obama has deported more immigrants than his predecessor?

If Obama’s presidency has been “remarkably scandal-free,” the remarkable part is how many of his actions were never reported as scandal, perhaps because he belongs to the same tribe as most major media outlets. When The New York Times covers a president from its tribe differently than it would cover a president from the other tribe, and then absolves their tribesman of scandal, people notice. And they resent it.

The common thread in all these words and deeds, from both tribes, is that they affront the dignity of the “other.”

Every human matters. Every vote matters. No one in the political process is upholding those values, not even the politicians who pretend to be. Bernie Sanders has a stump speech and a viral video that purport to celebrate the dignity of every individual. Only they don't, because Bernie’s entire schtick is to create an “out” group based on income, profession, and political views.

I have never been so glad to be a libertarian as I am this election cycle. It would be nice to see a few presidential candidates who disagree while demonstrating respect for the equal dignity of all people. It might just sap the demagogues of their power.