News stories are describing an exodus from high‐​tax and mismanaged big cities to lower‐​tax places with better governments. The health crisis and draconian shutdowns in places such as New York City and San Francisco are prompting people to reassess their lives and move their families and businesses to more hospitable climes.

The Wall Street Journal reports that Elon Musk is moving from California to Texas. The article notes:

Since Covid‐​19 struck, executives and employees have fled the San Francisco Bay Area for cheaper locales since remote working conditions have become the norm for many people. Last week, Hewlett Packard Enterprise, whose origins trace back to the founding of Silicon Valley, said it planned to shift its headquarters to Texas. The departures have led many tech leaders and industry watchers to question whether the geographic region is losing its position as the nation’s leading technology hub. Palantir Technologies Inc., founded in the Bay Area in 2003, moved its headquarters to Denver this year.

Another news piece in the Journal focuses on the influx of people and jobs to Austin:

The pandemic and the prospect of working remotely have spawned an exodus from New York and San Francisco to sunnier, more‐​affordable cities. Few have benefited more than Austin. Texas’ capital is attracting more corporate jobs and remote workers than ever before, lured by lower costs and lower taxes.

The chart shows interstate migration and taxes. The vertical axis is the ratio of in‐​migration to out‐​migration for households earning more than $200,000 per year, based on IRS data for 2018. The horizontal axis is state and local sales, property, and individual income taxes as a percent of personal income, based on TPC data. Each dot is a state, and the red line shows the fitted relationship from a statistically significant regression. 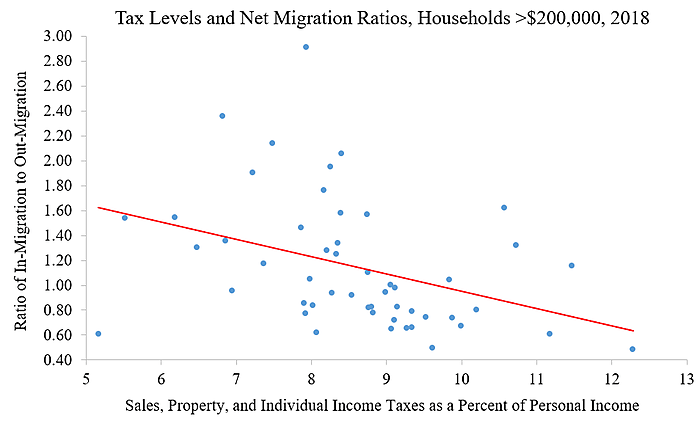 Interstate migration of high‐​earning households is correlated with tax levels. Nearly all the states with high net in‐​migration ratios have lower taxes. The three outliers in the top right are Hawaii, Maine, and Vermont. The outlier in the far bottom left with low taxes and net out‐​migration is Alaska. The big migration winner at the top is Idaho. Nearly three high earners move into Idaho for each one moving out.

The migration ratios for each state are reported in the table here. The chart shows pre‐​crisis data, and events this year have likely strengthened these trends.

Policymakers in states with high taxes and big government need to wake up to the new realities of mobile businesses and mobile lifestyles. They should cut bloated spending and create simple, low‐​rate tax codes. They should reduce regulations that dissuade entrepreneurship and squelch personal freedom. They should pursue zoning reforms to reduce housing prices, and they should inject competition into public schooling to improve quality.

Some states have been losing people for years. They need to learn that big governments are not better governments. The time for downsizing is now.

These issues are explored further in this study.