Happy Gulf of Tonkin Anniversary (and Thanks, NSA, for Lying about It for 40 Years)!

LBJ compared the resolution to “grandma’s nightshirt” because it “covered everything.” Like the 2002 Iraq War Resolution, it was worded broadly enough to allow the president to make the final decision about war all by himself—and vaguely enough to allow those who voted for it to deny responsibility for the war they’d authorized. 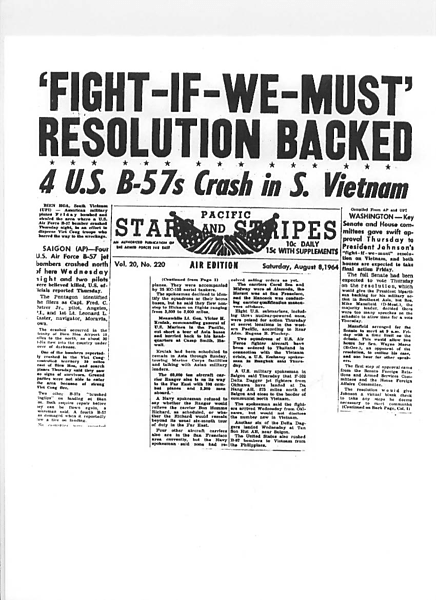 There’s a lesson there about how congressional fecklessness enables presidential warmaking. But what happened—or didn’t happen—in the Gulf of Tonkin in August 1964 is even more relevant to the current controversy over just how far we should trust the National Security Agency.

On August 2, 1964, the U.S.S. Maddox came under fire while gathering signals intelligence in Vietnamese territorial waters. But it was the alleged "second attack," confirmed by the NSA, that LBJ seized upon to order retaliatory bombings and push the Gulf of Tonkin Resolution through Congress.

As we now know, the "second attack" never happened. Days after the attack, Johnson cracked, “Hell, those dumb, stupid sailors were just shooting at flying fish!”  A National Security Agency historian later concluded that "N.S.A. officers had deliberately falsified intercepted communications in the incident to make it look like the attack on Aug. 4, 1964, had occurred, although he said they acted not out of political motives but to cover up earlier errors."

As Mark Ambinder and D.B. Grady recount in their new book Deep State: Inside the Government Secrecy Industry, "the NSA covered up its role in mistakenly reporting that two U.S ships had been attacked," and stuck to its original story for four decades, "a lie perpetuated by secrecy." In 2005, Freedom of Information Act requests and pressure from the press finally forced the release of classified documents on the Tonkin incident. The NSA resisted almost until the end, fearing, as one intelligence official told the New York Times, their release "might prompt uncomfortable comparisons with the flawed intelligence used to justify the war in Iraq."

As I observed in a recent column for the Washington Examiner, a number of commentators on the Right have lately been at pains to distinguish distrust of the IRS (perfectly appropriate!) from skepticism about NSA spying (hold on there...). At National Review Online, David French stresses "the limitations of the NSA/IRS comparison," which ignores that "national defense is a core, constitutional function of government." “The NSA isn’t the IRS” Jed Babbin argues in the American Spectator; in fact, the intelligence community is "a whole lot more trustworthy than most of the rest of our government."

Still, no less a figure than Director of National Intelligence James Clapper admits that, over the years, that "community" has given Americans plenty of reason to be suspicious. From Ambinder and Grady's Deep State:

Last century, the government covered up assassination plots, secret coups, illegal acts, arms sales, and any number of activities that embarrassed the nation when revealed. In the interview with Clapper, which took place in a large conference room on the top floor of the Office of the Director of National Intelligence complex near Tysons Corner, Virginia, he allowed that the “record of the community isn’t all that good” when it comes to the question of whether or not the government has shown itself capable of properly protecting secrets and not abusing its authority. Skepticism will always be warranted. “Our history is regretfully replete with abuse. There is some substantial basis for people to be suspicious,” he said.

Not long after that, Clapper underscored his own point by lying to Congress about NSA's dragnet collection of communications "metadata." Asked by Sen. Ron Wyden (D-OR): “Does the NSA collect any type of data at all on millions or hundreds of millions of Americans?” Clapper answered, “No sir … not wittingly.”

Sure, national security is a legitimate function of the state, but since, when it’s performing that function, the state has its most powerful weapons at its disposal, perhaps a little extra scrutiny is warranted. If we worry about abuses by IRS agents, public school administrators, and EPA bureaucrats, shouldn’t we worry about generals, soldiers, and spies too?