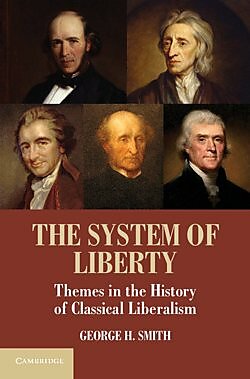 George H. Smith is one of the best-read, most insightful libertarians living today. He is the author of most of the Cato University Home Study Course, which you should definitely download. He writes a weekly article for Libertarianism.org titled “Excursions into the History of Libertarian Thought.” He is the author of Atheism: The Case Against God (1974), Atheism, Ayn Rand, and Other Heresies (1991), and audio series on “Great Political Thinkers,” “The Meaning of the U.S. Constitution,” and “The Ideas of Liberty.” And finally -- finally -- he has been persuaded to write down much of what he knows about the history of classical liberal thought in a new book from the Cato Institute and the Cambridge University Press, The System of Liberty: Themes in the History of Classical Liberalism.

It's a great study of classical liberalism and the relations among such liberal ideas as individualism, natural rights, utilitarianism, self-sovereignty, and what Lord Acton called “the polar star of liberty.” Along the way he answers such criticisms of liberalism as “atomistic individualism” and “social Darwinism.” It’s a college course in political philosophy in just 217 very readable pages. Buy it now for the low low price of $24.95.