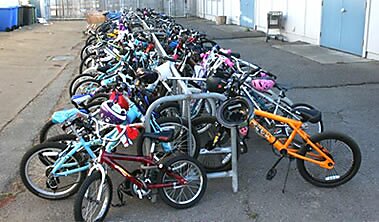 In New York City, the public schools are really feeling the pain of recession. I mean, things have gotten so bad according to the New York Times that schools have even had to stop giving away free bicycles:

At the start of school, Ms. Avery gathered her staff to tell them it would be one of the most difficult years they would face. This year, the school will have 29 students to a class, instead of 21, four fewer teachers and fewer incentives for students, such as free bicycles.

Wait. Free bicycles!? Sheesh! When I was a kid, the incentives were gold stars and “success cards.” These days — well, I guess, yesterday — the kids get free bicycles! No wonder, as I’ve shown before, public schools have been getting fatter and fatter for decades; the inflation rate for incentives alone has been astronomical! Too bad student achievement hasn’t risen at the nearly the same incredible rate — or at all.