Jason Richwine just blogged about my recent Mariel Boatlift post that confirmed George Borjas’ finding of wage increases for those with only a high school degree in post-Mariel Miami.  George Borjas understood my quick extension of his research.  Below are some of Richwine’s points and my quick responses.

“The point is not especially interesting, since the standard immigration narrative has always been that efficiency gains come at the expense of the natives with whom immigrants most directly compete – high school dropouts, in the case of Mariel.”

Although he argues that dropouts and workers with only a high school degree are not substitutes, he doesn’t provide evidence of potential complementarity.  In at least the Mariel case, there is some evidence of that.  My post shifts the narrative from “only businesses and the rich gain from low-skilled immigration” to “the real beneficiaries could be a much larger pool of workers who actually bothered to finish high school.”  That matters.

Furthermore, if “efficiency gains come at the expense of natives with whom immigrants most directly compete,” then who gains in Richwine’s analysis?  The cross-skill wage elasticities for those above a high school degree are not statistically significant.  They are for workers with only a high school degree according to Table 4 in this paper by Borjas and Joan Monras.  My Mariel post is perfectly consistent with those findings.

“But it would have been simple to determine the HS-and-below impact directly from the Borjas and Monras paper: Just take a weighted average of the dropout and graduate wage effects reported in their Table 4.  Doing that yields a negative number that does not reach statistical significance.”

I didn’t work backward from Borjas and Monras because they ended their analysis in 1984.  Using 1984 in my post would have unfairly biased my results against Borjas’ findings in his Mariel paper.  I chose 1986 because wages for dropouts were at their nadir in that year and to be consistent with Borjas’ Mariel paper.

Furthermore, Richwine’s point that combining wages for dropouts and high school only workers yields a result that is statistically insignificant shows yet again that high school graduate wages increased to outweigh the negative wage effects on dropouts.  I don’t think Richwine intended to neutralize Borjas’ findings in exactly that way.

“Overall, Nowrasteh frames his argument as the following: Borjas may or may not be right about Mariel lowering the wages of dropouts, but if he is, then we must also conclude that Mariel raised the wages of dropouts and high-school-only natives put together. The argument doesn't work. Across several different methodological scenarios that do not alter Borjas's conclusion, Nowrasteh's numbers – both his own and those of economists who previously studied the same question – do not tell a consistent story. His claim that accepting Borjas requires accepting that HS-and-below natives benefited from Mariel is therefore unconvincing.”

Those who swooned over Professor Borjas’ Mariel paper have consistently failed to note the increase in wages for high school graduates that Borjas and Monras discovered.  To quote their paper:

“As before, the estimated own wage effect is negative and significant, with a wage elasticity of about -0.9. Similarly, the estimate of the own employment effect is not distinguishable from zero.  The analysis, however, shows that the cross effects are numerically important.  Although the supply shock of the predominantly low-skill Marielitos lowered the wage of high school dropouts, it raised the wage of workers with a high school education, and this effect is both numerically and statistically significant. The cross-wage elasticity is about +0.7.  In addition, the unemployment rate of workers with more than a high school diploma also fell significantly [Emphasis added].”

That such dramatically different findings can result from such minor changes in methodology weakens all of the research on this topic – including mine.  Reading the work by Card, Peri and Yasenov, Borjas, and Borjas and Monras, and then conducting my own replication and extension of their results has significantly weakened my confidence in any of these findings.  For instance, weekly earnings for Hispanic dropouts between the ages of 25 and 59 increased in Miami shortly after the Boatlift (Figure 1).  Hispanic dropouts should be the most substitutable for Marielitos but they’re not according to Borjas’ methods.  This graph would well fit into David Card’s research. 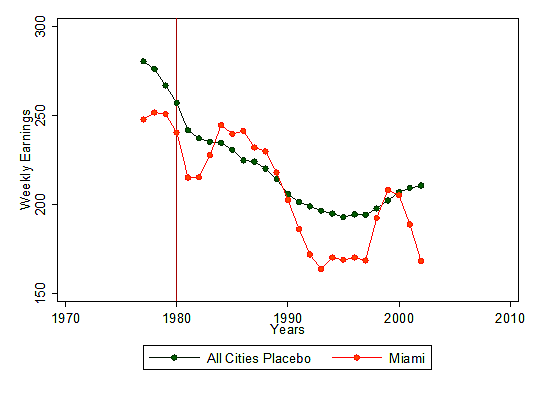 It’s baffling how anybody can replicate these findings, look at these graphs, and maintain their confidence in this research.