A Few PIRLS of Wisdom on New Reading Results

The latest international academic assessment results are out—this time focused on 4th grade reading—and the news isn’t great for the United States. But how bad is it? I offer a few thoughts—maybe not that wise, but I needed a super-clever title—that might be worth contemplating.

The exam is the Progress in International Reading Literacy Study—PIRLS—which was administered to roughly representative samples of children in their fourth year of formal schooling in 58 education systems. The systems are mainly national, but also some sub-national levels such as Hong Kong and the Flemish-speaking areas of Belgium. PIRLS seeks to assess various aspects of reading ability, including understanding plots, themes, and other aspects of literary works, and analyzing informational texts. Results are reported both in scale scores, which can range from 0 to 1000, with 500 being the fixed centerpoint, and benchmark levels of “advanced,” “high,” “intermediate,” and “low.” The 2016 results also include a first-time assessment called ePIRLS, which looks at online reading, but it includes only 16 systems and has no trend data so we’ll stick to plain ol’ PIRLS.

Keeping in mind that no test tells you even close to all you need to know to determine how effective an education system is, the first bit of troubling news is that the United States was outperformed by students in 12 systems. Among countries, we were outscored by the Russian Federation, Singapore, Ireland, Finland, Poland, Norway, and Latvia. Some other countries had higher scores, but the differences were not statistically significant, meaning there is a non-negligible possibility the differences were a function of random chance. Also, between 2011 and 2016 we were overtaken by Ireland, Poland, Nothern Ireland, Norway, Chinese Taipei, and England.

The second concerning finding is that, on average, the United States has made no statistically significant improvement since 2001. As the chart below shows, our 2016 result was not significantly better than our 2001 score. We appear to have made some strides between 2001 and 2011 but have clearly dipped since then. 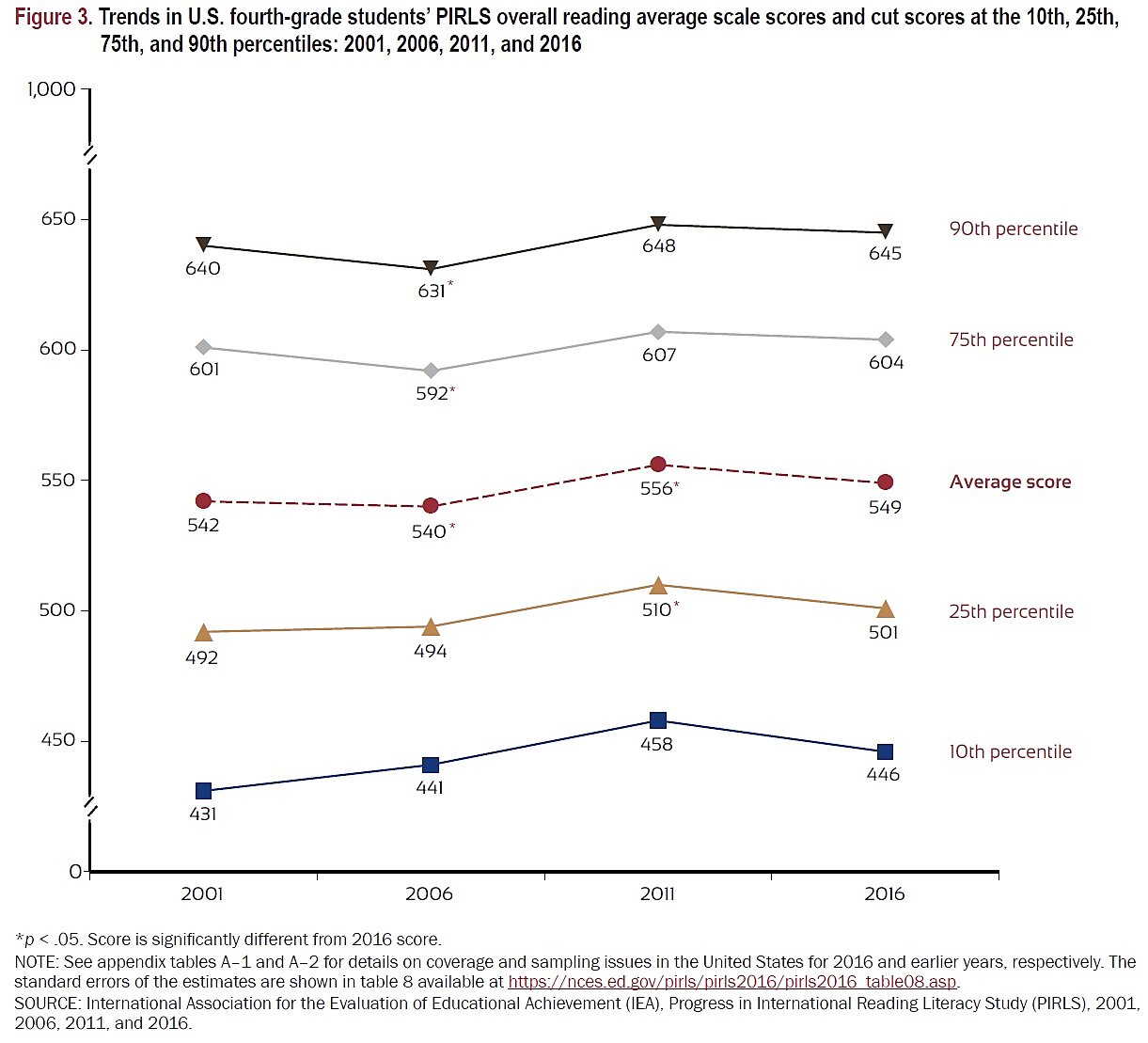 That’s it for PIRLS 2016 musings. On to the next standardized test results, and other things that may matter far more.