Media have been reporting lately about the public’s burgeoning opposition to the Congress granting President Obama fast track trade negotiating authority. Among the evidence of this alleged opposition is a frequently cited survey, which finds that 62 percent of Americans oppose granting fast track to President Obama.

Considering that the survey producing that figure was commissioned by a triumvirate of anti‐​trade activist groups – the Communication Workers of America, the Sierra Club, and the U.S. Business and Industry Council – I had my doubts about the accuracy of that claim. After all, would lobbyists who devote so much of their efforts to derailing the trade agenda risk funding a survey that might produce results contrary to their objectives? My skepticism – it turns out – was warranted. The 62 percent who allegedly “oppose giving the president fast‐​track authority for TPP [the Trans‐​Pacific Partnership agreement]” actually oppose giving the president a definition of fast track that is woefully inaccurate. The graphic below shows the question and response tally, as presented in the report showing the survey’s results, which is here. Read the question that begins with “As you may know…” 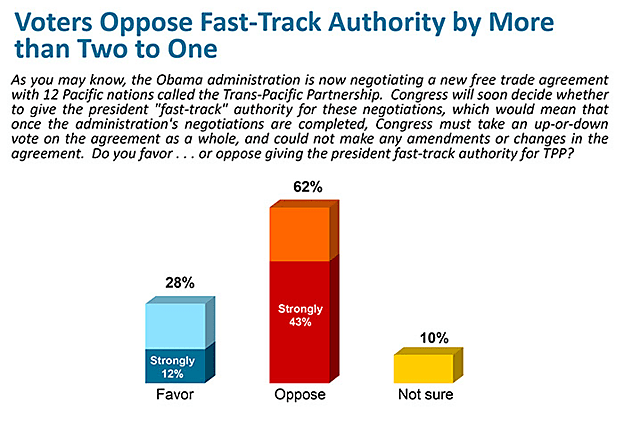 Convinced? Are you with the 62 percent? I would be, if fast track were really as the question implies. But the question includes an incomplete and misleading description of fast track. The question is being asked, presumably, of a random sample of Americans, which means that the average respondent has no idea about the purpose of fast track, and knows even less about its language and details. Thus, the phrasing of the question is highly determinative of the answer.

The thrust of fast track as implied by the question above is that Congress has no role in the process whatsoever and sits by passively while the president negotiates deals to his liking, submits them to Congress, and says take it or leave it. Most thinking people who cherish our republican form of government should and would oppose legislation that sanctions the abdication of responsibility from one branch of government to another. But that’s not what fast track does. Under the Constitution, Congress is authorized to regulate foreign commerce and the Executive is authorized to make treaties. Negotiating, finalizing, and ratifying trade treaties involve both sets of authorities. The survey question, however, leaves out entirely the balancing term of this traditional sharing of authority. It is true that under the terms of fast track, Congress agrees to a timely, up‐​or‐​down vote without amendments. But that happens only after the Congress has conveyed its negotiating objectives and parameters to the president. Under the recently introduced legislation to restore fast track, Congress is demanding that 147 negotiating objectives be met before allowing fast track consideration of any trade deals that come before it. If those objectives are not met, consideration of the trade deal is taken off the fast track and subject to normal procedures. By presenting a severely misleading (and more menacing definition) of fast track to its survey respondents, and then representing and publicizing the results as the attitudes of Americans toward fast track, the survey designers (Hart Research Associates and Chesapeake Beach Consulting) and sponsors have done the public a major disservice. As a result, we are further from an informed debate than we were before the survey was conducted.