Faked Out by One Chart and One Subsidy‐​Seeking Industry

In a recent post, Ezra Klein offers two arguments to beat back the “commenters hanging around demanding we redefine the word “uninsured,” attempting to downplay the problem of lack of coverage, denying all widely accepted measures of the uninsured, and, when that fails, writing the uninsured off as statistical artifacts of momentary lapses in coverage.”


Klein’s first argument is based on this chart: 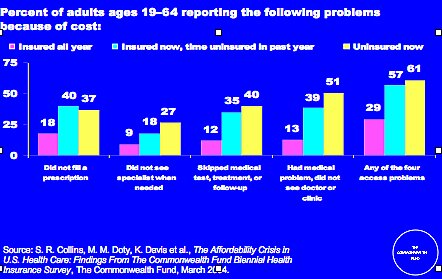 According to this chart, 61 percent of those who were uninsured when surveyed reported that in the past year, they had one of the following problems:

I see two problems with trying to get too much out of these data.

Klein’s second argument concerns the estimate that 45 million Americans lack health insurance. That estimate is generated by the Census Bureau’s Current Population Survey. It has been criticized for a number of reasons, which are not important for present purposes.