The Dollar, Oil Prices and Exports: Lessons of Recent History

Business news pages are suddenly full of hand‐​wringing about how the rising dollar threatens to slash U.S. exports and economic growth. “The strong dollar is the biggest threat to economic recovery,” warns one reporter. Others quote White House chief economist Jason Furman saying “the strong dollar is undoubtedly a headwind” for the U.S. economy.


It’s not that simple. 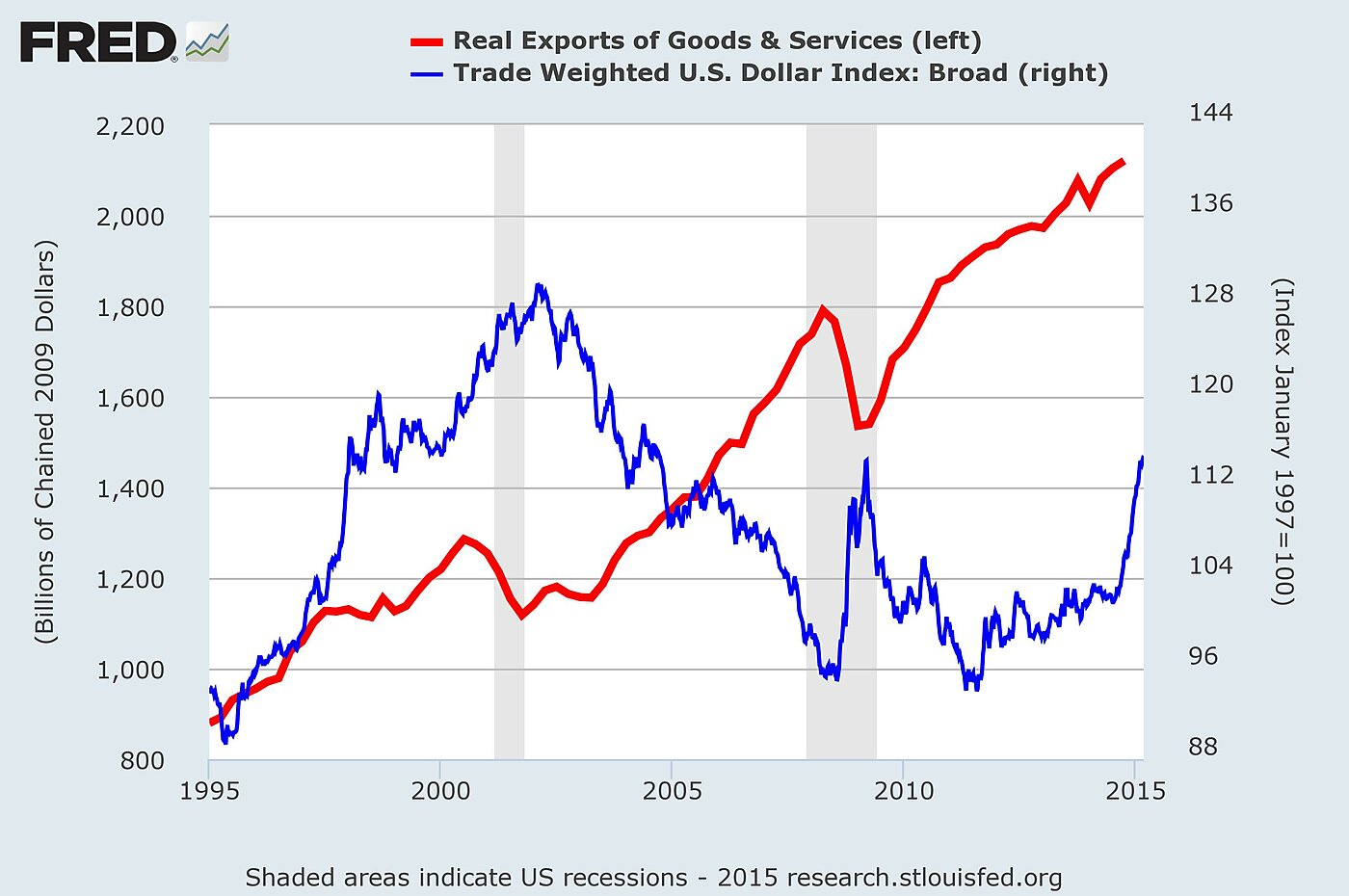 The graph above compares real U.S. exports with the trade‐​weighted exchange rate. The dollar was rising much faster in 1995–2000, when both exports and the economy were growing at an impressive pace. Exports eventually fell with recession, as always. But it is much harder to blame the recession on exchange rates than on interest rates – the Fed pushed the fed funds rate 4.7 percentage points above core inflation.


From 2001 to 2007, the dollar fell and exports rose. That pattern might appear to justify recent lobbying for a lower dollar were it not for the familiar connection between oil prices and the dollar. As the dollar fell, the price of West Texas crude soared from $19 a barrel in December 2001 to over $133 in June‐​July 2008. Every postwar recession except 1960 was preceded by a spike in oil prices, and the Great Recession turned out to be no exception.


The recent rise in the dollar has merely brought it back to about where it was in 1998 or 2006, which were not bad years. The latest exchange rate gyrations are dominated by self‐​inflicted wounds to the euro and yen, but U.S. exports to the EU are only 1.3% of GDP, and exports to Japan are 0.4% of GDP.


U.S. multinationals have complained about “translation losses” – the fact that profits of subsidiaries in Europe or Japan will be less valuable when translated into dollars. But that is equally true for earnings of European and Japanese firms too (and for their stock prices when translated into dollars). And multinationals often leave foreign earnings abroad, due to the uniquely foolish U.S. tax if offshore earnings are brought home.


The weakened euro and yen will raise the cost of living and cost of production for citizens of the afflicted countries (including the price of oil and other commodities). It is true that such expertly planned impoverishment of such large economies can scarcely benefit the global economy. If other countries want to make their money less trustworthy and less desirable, however, there is not much we can do about that.