When those in power make blatantly false claims that could lead to less freedom for the least advantaged members of society, it is imperative that they are corrected. The President of the American Federation of Teachers, Randi Weingarten, gave a speech last month where she stated that school “vouchers increase racial and economic segregation.”

What Does the Evidence Say?

As I pointed out last month in a Cato Policy Forum on School Choice and Democracy, out of the eight rigorous empirical studies existing on the subject, seven of them show that school voucher programs increase racial integration within the United States. As shown in table 1 below, none of these studies indicate that vouchers lead to racial segregation. Why is this the case?

When school choice programs give disadvantaged children the opportunity to exit their already-segregated neighborhood schools, their transitions unsurprisingly result in a more racially and socioeconomically integrated society. 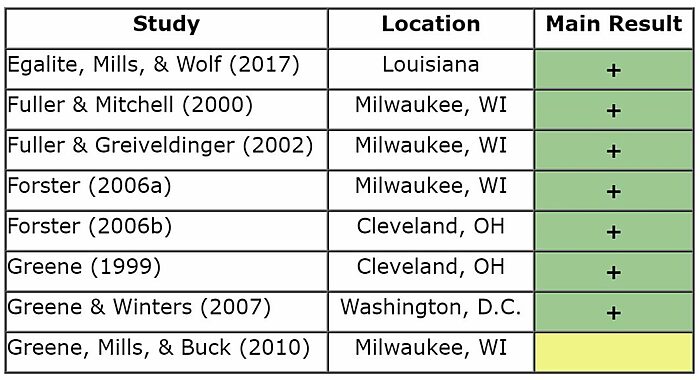 For some reason, school choice skeptics ignore all of the compelling U.S. evidence, and instead point to international studies from countries like Sweden and Chile. However, these studies are methodologically unable to show that vouchers actually led to segregation.

For example, the Sweden study correlates the changes in the degree of school choice and racial segregation across two time periods, 1993 and 2009. Notably, the authors did not control for overall changes in the immigrant population in Sweden over the same years, so they are unable to conclude that the voucher program caused the change. According to the Swedish Migration Agency, yearly residence permits granted to immigrants ranged from around 59,000 in 1993 to around 100,000 in 2009. Obviously, overall immigration leads to more racial stratification, regardless of the school choice program.

The scientific evidence overwhelmingly shows that school vouchers lead to racial integration. But what if it didn’t?

Should such a finding allow government officials to control the educational selections of families desperately trying to improve their well-being? If a minority parent wanted to send their child to a prestigious all-black school, should a bureaucrat be able to tell them that they are not allowed to do so?

This is strange to me: in our country’s disturbing history, government officials decided that people ought to be “separate but equal” for the greater good. They thought that having racially diverse people in the same institutions would harm society through racial tension. Today, public officials make the same argument, just in the opposite direction. They claim that government force is necessary to move people, based on skin color, to achieve some greater social goal.

If you do not support the forced racial segregation that started back in 1896, it would be logically inconsistent for you to support forced racial integration today.

We can avoid all of the negative consequences that come along with the use of government force by allowing individual families to voluntarily opt into the schools that work best for their children. As the evidence shows, the self-interested choices of individual parents result in the social benefit of racial integration, without coercion by those in power.