Education scholars such as Richard Kahlenberg from The Century Foundation claim that since school choice programs “divert important resources away from the public schools,” children left behind in traditional public schools could be negatively impacted academically. However, a peer-reviewed study recently released by Temple University professor Sarah Cordes finds that charter school competition actually improves student achievement in nearby traditional public schools in the nation’s largest school district—New York City.

Specifically, Cordes finds that attending a traditional public school within a mile of a charter school in NYC increases student achievement in math and reading by about 0.015 standard deviations, or around 11 days of additional learning in both subjects. The detected effects increase with the proximity of the public charter school competition.

But why does this happen?

Residentially assigned public schools only lose funding if families are able to exit them for an alternative private or public educational option. If a traditional public school leader knows that their educational institution could be financially harmed by the choices of individual families, they will have a strong incentive to cater to the needs of their students. Since parents care about the academic success of their children, public school leaders will need to focus on turning educational resources into vital lifelong outcomes when faced with competitive pressures.

Although these findings may surprise those that listen to the frequent claims made by public education monopolists, they should not surprise social scientists. This study only adds to the abundance of the evidence existing on the topic that points in the same direction.

As shown in Table 1 below, 23 of 24 such prior evaluations find that competitive pressures from private school choice programs improve the test scores of students left behind in traditional public schools. One study did not find any statistically significant competitive effects. 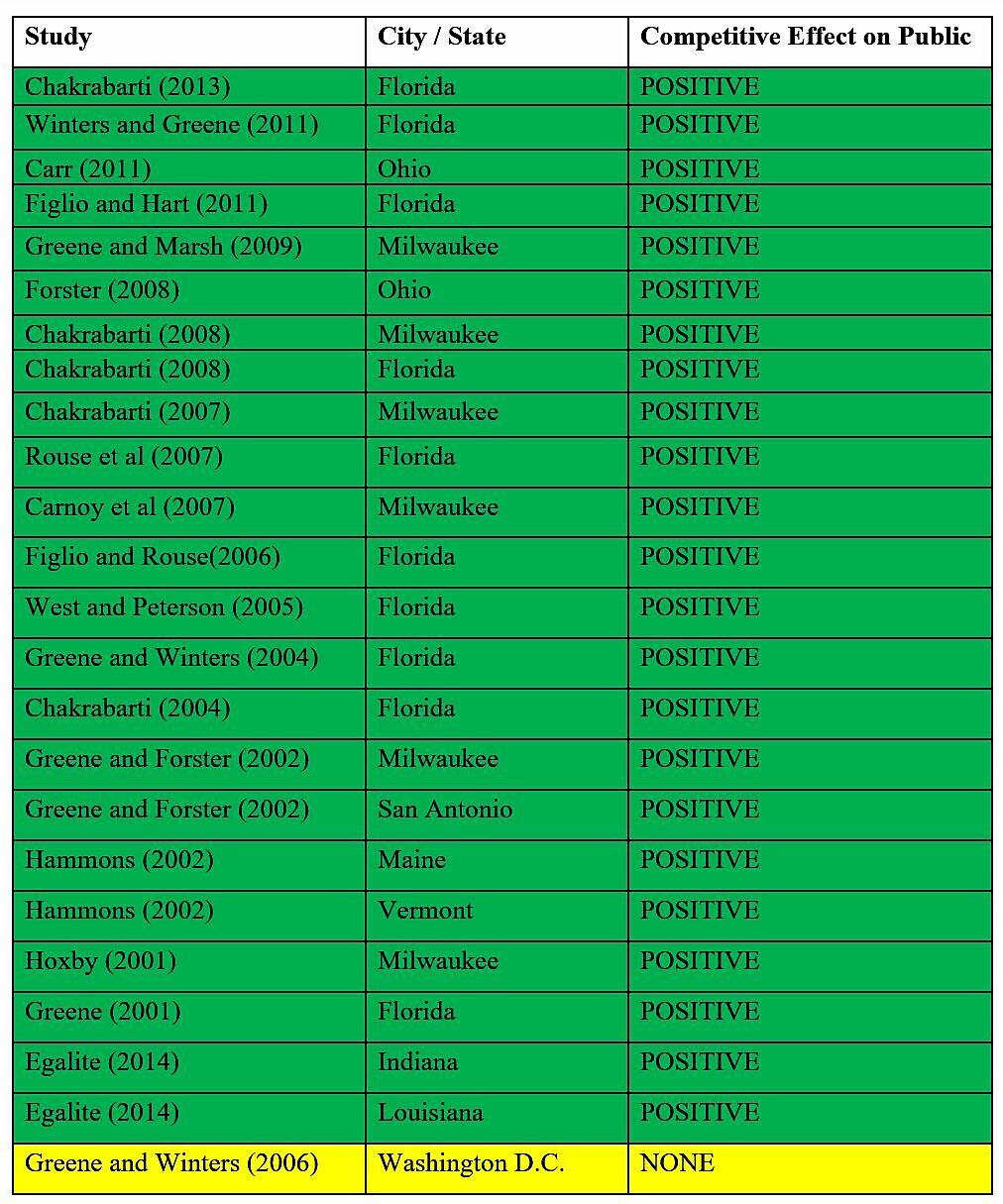 Another peer-reviewed systematic examination of the scientific evidence finds the same conclusion: 20 of 21 reviewed studies indicate that private school choice programs improve the achievement of students that are left behind in their assigned public schools. No studies found negative effects.

Public school leaders that are currently able to compel families to pay for their educational services, nearly regardless of quality or price levels, have an obvious interest in preserving the existing public school monopoly. Rather than listen to the propaganda disseminated by those in power, we should embrace rational theory and the evidence produced by the only thing that can allow us to approach truth: the scientific method.