Following last week’s electoral victory, the House Republican leadership has been talking up its pre‐​election pledge to return federal spending to 2008 levels. As I’ve previously discussed, the Republicans are only talking about non‐​security, discretionary spending. This category of spending represents a relatively small portion of the overall federal budget, and would only shave about $100 billion off of what the president wants to spend.


A better idea would be to cut total spending to 2008 levels. Excluding interest, the president has proposed spending $853 billion more in fiscal 2011 than the government spent in fiscal 2008. The following table shows the increases by department. 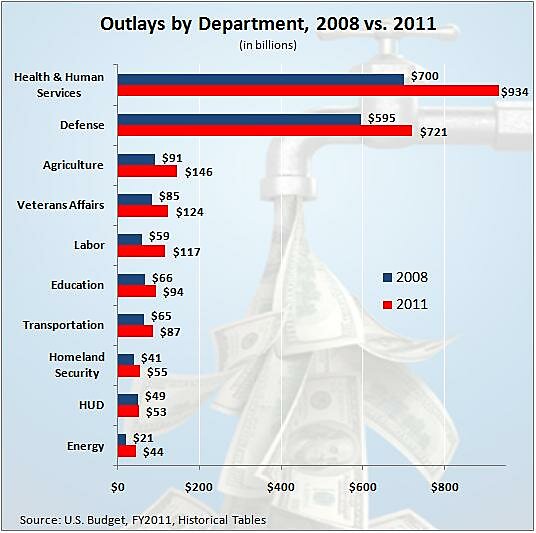 As the chart shows, federal spending for the Pentagon alone is set to increase by $126 billion, or more than the amount that the Republican leadership says it wants to cut. Therefore, if the Republicans want to get serious about cutting spending and reining in the growing federal debt, all categories of spending must be on the table.


Apologists for government spending will complain that returning spending levels to 2008 would be draconian. But compare the percentage increases in spending over three years under the president’s proposed budget. 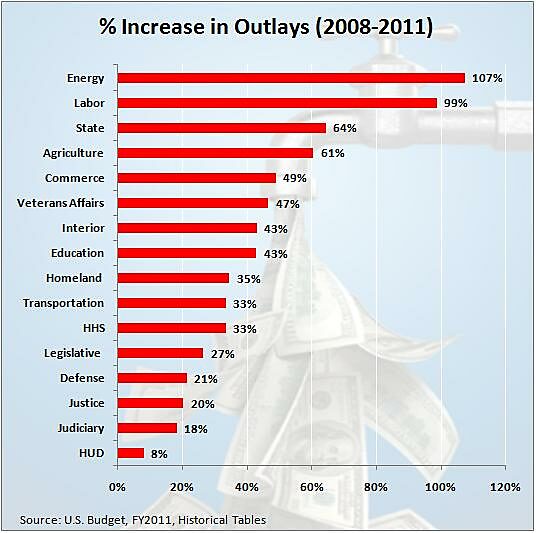 President Obama and the Democrats told the American people that this spending explosion was needed to fix the economy. Unfortunately, it has only succeeded in transferring a tremendous amount of resources from the private sector to the less efficient government. Republicans were elected, in part, to help put the private sector back in the economic driver’s seat. To do so, Republicans need to be much more ambitious than trimming just $100 billion off of the president’s three‐​year $853 billion spending increase.