Tax Foundation has released a study comparing country tax codes. The “International Tax Competitiveness Index” by Kyle Pomerleau and Andrew Lundeen found that “the United States has the 32nd most competitive tax system out of the 34 OECD member countries.” In other words, the United States is a bad place to invest from a tax perspective.


Factors behind America’s poor score include “the highest corporate tax rate in the developed world” and the fact that we are “one of the six remaining countries in the OECD with a worldwide system of taxation.”


Another cause of our poor score is our high property taxes. Many U.S. jurisdictions impose property taxes not just on land and buildings, but also on business machinery and equipment. These taxes are a strong deterrent to capital investment, and they should be repealed. U.S. state and local governments collect a huge $242 billion a year in business property taxes, according to E&Y.


In an upcoming Fiscal Report Card on America’s Governors, Nicole Kaeding and I mention efforts to cut property taxes on business equipment, including reforms in Indiana and Michigan. I suspect one reason for Detroit’s economic demise has been its very high property tax burden.


Using Tax Foundation data, the chart shows property taxes as a percent of gross domestic product for the 34 OECD countries. 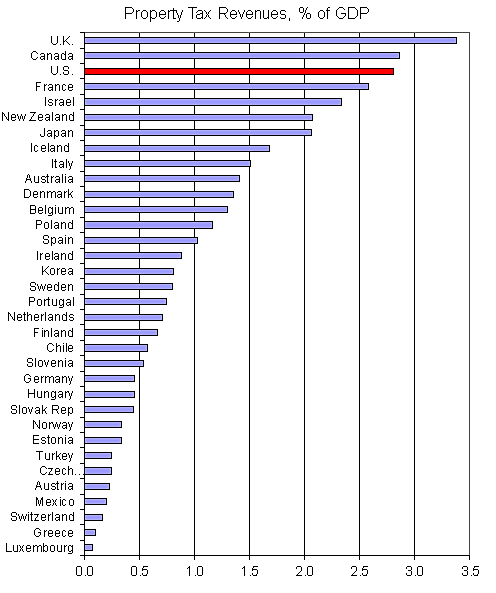