The Current Wisdom is a series of monthly articles in which Patrick J. Michaels and Paul C. “Chip” Knappenberger, from Cato’s Center for the Study of Science, review interesting items on global warming in the scientific literature or of a more technical nature that may not have received the media attention that they deserved, or have been misinterpreted in the popular press.

Despite what you may think if you reside in the eastern United States, the world as a whole in 2014 has been fairly warm. For the past few months, several temperature-tracking agencies have been hinting that this year may turn out to be the “warmest ever recorded”—for whatever that is worth (keep reading for our evaluation). The hints have been turned up a notch with the latest United Nations climate confab taking place in Lima, Peru through December 12.  The mainstream media is happy to popularize these claims (as are government-money-seeking science lobbying groups).

But a closer look shows two things: first, whether or not 2014 will prove to be the record warmest year depends on whom you ask; and second, no matter where the final number for the year ranks in the observations, it will rank among the greatest “busts” of climate model predictions (which collectively expected it to be a lot warmer). The implication of the first is just nothing more than a jostling for press coverage. The implication of the latter is that future climate change appears to be less of a menace than assumed by the president and his pen and phone.

First, a little background. Several different groups compile the global average temperature in near-real time. Each uses slightly different data-handling techniques (such as how to account for missing data) and so each gets a slightly different (but nevertheless very similar) values. Several groups compute the surface temperature, while others calculate the global average temperature in the lower atmosphere (a bit freer from confounding factors like urbanization). All, thus far, only have data for 2014 compiled through October, so the final ranking for 2014, at this point in time, is only a speculation (although a pretty well-founded one).

The three major groups calculating the average surface temperature of the earth (land and ocean combined) all are currently indicating that 2014 will likely nudge out 2010 (by a couple hundredths of a degree Celsius) to become the warmest year in each dataset (which begin in mid-to-late 1800s). This is almost certainly true in the datasets maintained by the U.S. National Oceanographic and Atmospheric Administration (NOAA) and the UK Met Office Hadley Centre. In the record compiled by NASA’s Goddard Institute for Space Studies (GISS), the 2014 year-to-date value is in a virtual dead heat with the annual value for 2010, so the final ranking will depend heavily on the how the data come in for November and December. (The other major data compilation, the one developed by the Berkeley Earth group is not updated in real time).

There is one other compilation of the earth’s surface temperature history that has recently been developed by researchers Kevin Cowtan and Robert Way of the University of York. This dataset rose to prominence a year ago, when it showed that if improved (?) methods were used to fill in data-sparse regions of the earth (primarily in the Arctic), the global warming “hiatus” was more of a global warming “slowdown.” In other words, a more informed guess indicated that the Arctic had been warming at a greater rate than was being expressed by the other datasets. This instantly made the Cowtan and Way dataset the darling of folks who wanted to show that global warming was alive and well and not, in fact, in a coma (a careful analysis of the implications of Cowtan and Way’s findings however proved the data not up to that task). So what are the prospects of 2014 being a record warm year in the Cowtan and Way dataset? Slim. 2014 currently trails 2010 by a couple hundredths of a degree Celsius—an amount that will be difficult to make up without an exceptionally warm November and December. Consquently, the briefly favored dataset is now being largely ignored.

It is worth pointing out, that as a result of data and computational uncertainty,  none of the surface compilations will 2014 be statistically different from 2010—in other words, it is impossible to say with statistical certainty, that 2014 was (or was not) the all-time warmest year ever recorded.

It is a different story in the lower atmosphere.

There, the two groups compiling the average temperature show that 2014 is nowhere near the warmest (in data which starts in 1979), trailing 1998 by several tenths of a degree Celsius. This difference is so great that it statistically clear that 2014 will not be a record year (it’ll probably fall in the lower half of the top five warmest years in both the Remote Sensing Systems (RSS) and the University of Alabama-Huntsville (UAH) datasets). The variability of temperatures in the lower atmosphere is more sensitive to the occurrence of El Niño conditions and thus the super El Niño of 1998 set a high temperature mark that will likely stand for many years to come, or at least until another huge El Niño occurs.

In all cases, the former will make headlines.

But these headlines will be misplaced. The real news is that climate models continue to perform incredibly poorly by grossly overestimating the degree to which the earth is warming.

Let’s examine climate model projections for 2014 against the observations from the dataset which has the greatest chance of 2014 as the warmest year—the NOAA dataset.

Figure 1 shows the average of 108 different climate model projections of the annual surface temperature of the earth from 1980 through 2014 along with the annual temperature as compiled by NOAA. 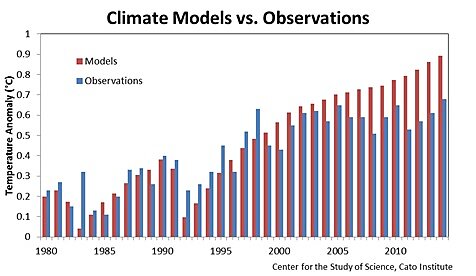 For the past 16 straight years, climate models have collectively projected more warming than has been observed.

Over the period 1980-2014, climate models projected the global temperature to rise at a rate of 0.24°C/decade while NOAA observations pegged the rise at 0.14°C/decade, about 40 percent less. Over the last 16 years, the observed rise is nearly 66 percent less than climate model projections. The situation is getting worse, not better. This is the real news, because it means that prospects for overly disruptive climate change are growing slimmer, as are justifications for drastic intervention.

We don’t expect many stories to look any further than their “2014 is the warmest year ever” headlines.

As to the rest of the picture, and the part which holds the deeper and more important implications, well, you’ll have to keep checking back with us here—we’re happy to fill you in!