During his campaign, President Trump promised to target the “bad hombres” in the United States illegally. But Immigration and Customs Enforcement (ICE) statistics indicate that his administration has cast a much wider net. More than one in four immigrants that ICE arrested last year had no criminal convictions at all, and of the rest, their convictions were mostly victimless crimes—largely traffic infractions, immigration offenses, and drug offenses. Almost 90 percent were for nonviolent crimes. ICE cannot justify its broad crackdown based on these figures.

Figure 2 shows the distribution within each broad category of convictions. Most violent crimes were assaults, which include simple assaults defined by the FBI to include assaults “where no weapon was used or no serious or aggravated injury resulted” and include “stalking, intimidation, coercion, and hazing” where no injuries occurred. The FBI excludes simple assault from its definition of violent crime, but ICE fails to break down this category, so we cannot. The plurality of property crimes were larcenies, which include “thefts of bicycles, motor vehicle parts and accessories, shoplifting, pocket-picking, or the stealing of any property or article that is not taken by force and violence or by fraud.”

Almost two-thirds of the “possible victims” category includes DUIs, which usually don’t have a victim but impose the threat of injury on people. This category also includes some nebulous categories like “privacy,” “threats,” and disturbing the peace, which are undefined in the ICE report. Nonviolent sex crimes include statutory rape as well as lude behaviors in public. Fraud and forgery could have victims or they could be crimes where immigrants allow their family members to use their identities to obtain work in the United States. Family offenses include “nonviolent acts by a family member (or legal guardian) that threaten the physical, mental, or economic well-being or morals of another family member” that aren’t classified elsewhere (e.g. violating a restraining order). Kidnapping convictions generally arise from custody disputes over children, so I included them in this category.

Figure 2: Distribution of Convictions of Criminal Immigrants Arrested by ICE 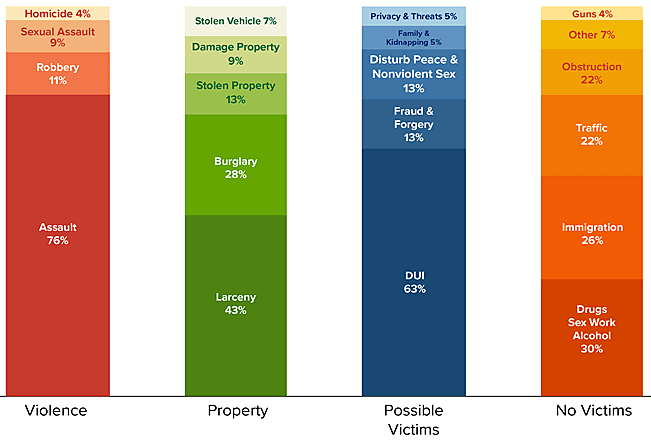 Victimless offenses were traffic infractions that were not DUIs, immigration offenses such as entering the country illegally, or “vice” crimes (drugs, sex work, or alcohol). Immigration “crimes” include illegally entering the country, reentering after a deportation, falsely claiming U.S. citizenship, and smuggling. Obstruction offenses mainly include parole and probation violations or failure to appear in court.

ICE provides a public service when it apprehends and removes immigrants from society who are threats to Americans. It fails the public when it deports other people and, by reducing the number of peaceful people in the society, actually increases the proportion of criminals. This strategy will not make Americans safer—indeed, it will make them less safe. Congress should again require ICE to focus on serious criminals.