Customs and Border Protectionjust announced that Border Patrol has apprehended 364,941 people from the beginning of fiscal year 2019 through to the end of March 2019. Border Patrol apprehensions this FY rose by 34 percent in the month of March. Although the number of apprehensions is rising, the proportion of all apprehensions who arecriminal aliensis dropping, in a trend that I wrote about earlier this month. Furthermore, the absolute number of criminal aliens arrested by the end of FY 2019 will be below the number arrested in any year since CBP began publishing data. 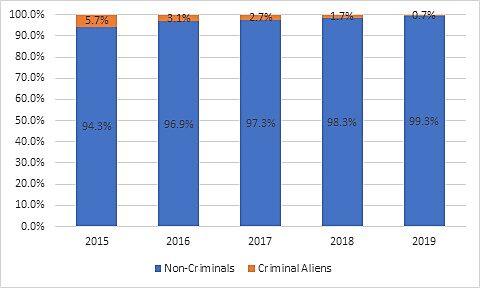 The most consistent argument wielded in support of closing the border or harsher border security is that those being apprehended are dangerous criminals. Based on data supplied by Border Patrol, the absolute number of criminal aliens and their proportion of all apprehensions along the border are lower in FY 2019 than in previous years. While the government has an important role in keep criminal aliens out of the United States, the current situation along the border shows that Border Patrol has a better handle on crime than at any time in the recent past.