David Boaz was watching CNN on Friday and noticed a chart that looked suspicious.

President Obama and other policymakers have expressed concern about the high U.S. corporate tax rate, but this CNN chart shows that our rate isn’t too out of line with other countries. Indeed, CNN host Soledad O’Brien said to guest Jack Welch, “But when I look at the corporate tax rates around the world, we have a little graphic of this, I’ll throw it up. We see United States is at 35%, France is at 34%, Belgium at 33%, Spain at 30%, Japan at 30%, Mexico at 30%. It sounds like we’re kind of competitive, right?”


Alas Soledad, your CNN graphics experts led you astray. America is not “kind of competitive” on corporate taxes. Of the 34 high‐​income OECD countries, your graphics experts compared us with the 5 other countries that have the highest rates. The data appears to have come from the central government column in this table, and it is charted below.


For your interest Soledad, the average central government rate is just 23.6 percent, which is much lower than our 35 percent rate. Our rate is the highest in the OECD. You may also be interested to know that the rate in our largest trading partner, Canada, was just 16.5 percent in 2011 and was cut to just 15 percent in 2012. Canadian policymakers slashed the corporate rate to the current level from 29 percent in 2000.


Given President Obama’s interest in corporate tax reform, perhaps CNN viewers would be interested in a story about why the Canucks — in a bipartisan fashion — pursued that dramatic reform. 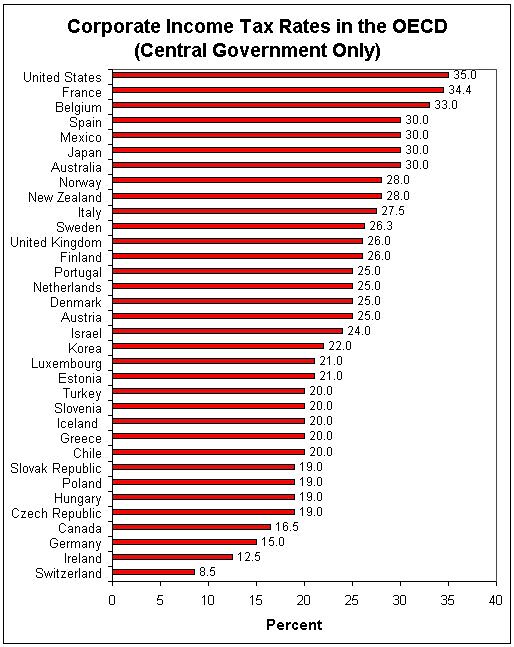 For more on corporate tax rates around the world, see Global Tax Revolution.