Mainstream media reporting on infrastructure seems to be driven by the lobby groups that are pushing for more federal spending. A Washington Post article today reflects two popular lobbyist themes: “the bridges are falling down” and “the federal government needs to solve the problem.” For today’s story, the Post could have saved the reporter’s salary and simply asked the press office at the American Road and Transportation Builders Association (ARTBA) to write it.

The headline, “More than 55,000 bridges need repair or replacement,” captures the bridges-falling-down theme. That figure is the number of “structurally deficient” bridges, which the Post sources from the ARTBA. But the story does not mention that these bridges (56,007 according to federal data) are 9.1 percent of the nation’s 614,387 bridges, which is the lowest such percentage in 24 years. The chart below shows that the share of bridges in this category fell from 21.7 percent in 1992 to just 9.1 percent in 2016.

That positive trend undermines the scary scenario that most articles want to convene, so it is not mentioned. By the way, “structurally deficient” does not mean unsafe.

The other lobbyist theme is captured by the Post in a quote from Rep. Bill Shuster, “We at the national level have to figure out how we’re going to make these investments.”

No we don’t. Of the 600,000 bridges, 99 percent are owned by state and local governments. Responsibility lies with the owner. The states have a powerful ability to tax, and about half of them have raised their gas taxes in just the past five years to fund highways and bridges. The states can also borrow or privatize to steer additional funds to infrastructure.

The Post story notes the large differences in bridge maintenance across the states. Apparently, 23 percent of bridges in Rhode Island are structurally deficient, but just 2 percent are in Texas. That does not suggest a need for federal intervention, but rather that Rhode Island’s leaders have been negligent.

It also suggests that a new federal spending effort to reduce the number of structurally deficit bridges would be unfair. It would reward irresponsible states such as Rhode Island, and penalize states such as Texas that have already prioritized bridge maintenance. 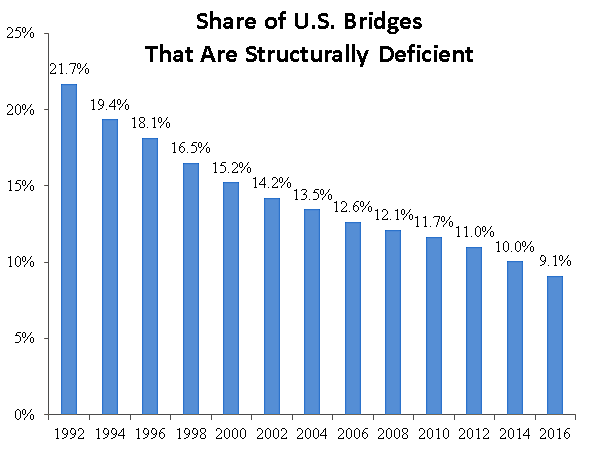