Climate Insensitivity: What the IPCC Knew and Didn’t Tell Us, Part II

The bottom line from the new report from the Global Warming Policy Foundation (GWPF) is that the U.N.’s Intergovernmental Panel on Climate Change (IPCC) knew, but didn’t highlight, the fact that the best available scientific evidence suggests that the earth’s climate is much less sensitive to atmospheric carbon dioxide input than the climate models they relied upon  to forecast future global warming portray.

We covered the GWPF report and its implications in this post. But one implication is worth mentioning again, from the report’s conclusions:

The [climate models] overestimate future warming by 1.7–2 times relative to an estimate based on the best observational evidence.

While the report's authors, Nicolas Lewis and Marcel Crok, are talking about the future, the same thing should apply to the past. In fact, a strong test of Lewis and Crok’s prediction is whether or not the same climate models predict too much warming to have already taken place than observations indicate.

There is perhaps a no better general assessment of past model behavior than the analysis that we developed for a post back in the fall.

The figure below is our primary finding. It shows how the observed rate of global warming compares with the rate of global warming projected to have occurred by the collection of climate models used by the IPCC. We performed this comparison over all time scales ranging from from 10 to 63 years. Our analysis ended in 2013 and included an analysis of the global temperature trend beginning in each year from 1950 through 2004.

As can be clearly seen in our figure, climate models have consistently overestimated the amount of warming that has taken place. In fact, they are so bad, that over the course of the past 25 years (and even at some lengths as long as 35 years) the observed trend falls outside of the range which includes 95 percent of all model runs. In statistical parlance, this situation means that the observed trend cannot be reliably considered to be part of the collection of modeled trends. In other words, the real world is not accurately captured by the climate models—the models  predict that the world should warm up much faster than it actually does. 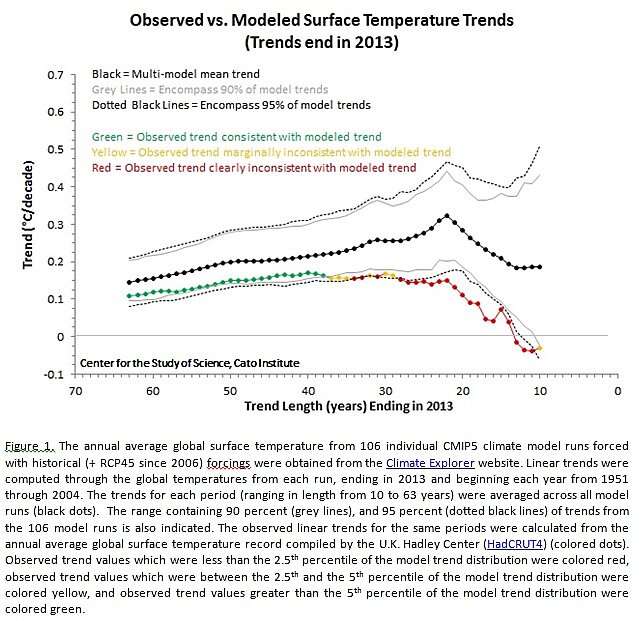 And judging from past performance, the conclusions of Lewis and Crok, that “[t]he [climate models] overestimate future warming by 1.7–2 times relative to an estimate based on the best observational evidence” seem right on the money.

Global climate disaster averted! Too bad the IPCC didn’t see fit to pass this important bit of information along to policymakers, but instead, attempted to sweep it under the rug.

Maybe there ought to be a congressional investigation. Staffers, start your engines!