This morning’s monthly trade report from the Commerce Department will likely only add to the growing pessimism about the U.S. economy. The trade deficit in June widened from the month before, which we are told endlessly (as in this morning’s AP dispatch) is a “subtraction” from GDP, even though my April Cato Trade Policy Analysis showed why that just isn’t so.


Exports did take a hit for the month, falling 2.3 percent from the month before. But here is a bit of good news to hold on to from the report: U.S. exports of goods and services are still on track to double from 2009 through 2014.


Doubling U.S. exports over those five years was the goal President Obama set when he unveiled his National Export Initiative in his State of the Union Address in January 2010. As the accompanying chart shows, even with the decline in June, total exports for the previous 12 months added up to almost $2 trillion. That still represents an annualized growth rate from the base year of 2009 that is slightly ahead of the rate needed to double exports by 2014. 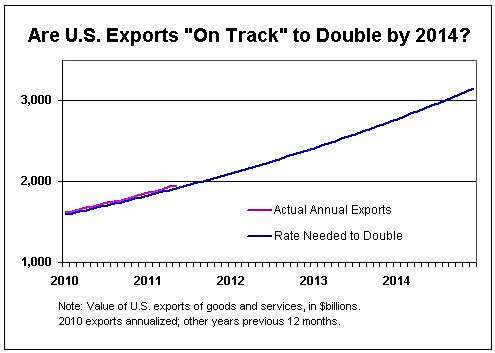 Maintaining this rate of growth for the next three and a half years will be a daunting task, as I explained here. The administration and Congress should still take concrete, free‐​market steps to promote more exports and expand trade overall, such as keeping the U.S. market open for imports, avoiding a trade war with China, and enacting long‐​stalled trade agreements with South Korea and Colombia. (Note I did not include more funding for the Export‐​Import Bank on the list, with my Cato colleague Sallie James providing the reasons why in a recent study.)