In the State of the Union address on January 20, President Obama said, “those at the top have never done better. . . Inequality has deepened.”  The following day, Fox News anchor Brett Baier said, “According to the work of Emmanuel Saez, a professor at the University of California, Berkeley, during the post-recession years of 2009-2012, top earners snagged a greater share of total income growth than during the boom years of 2002-2007. In other words, income inequality has become more pronounced since the Bush administration, not less.”

Senator Bernie Sanders agrees that “in recent years, over 99 percent of all new income generated in the economy has gone to the top 1 percent.”  And Senator Ted Cruz likewise confirmed that, "The top 1 percent under President Obama, the millionaires and billionaires that he constantly demagogued earned a higher share for our income than any year since 1928.”

When any statistic is so politically useful and wildly popular among left-wing Democrats and right-wing Republicans you can be pretty sure it’s baloney.  Bipartisan baloney.

In November 2013, I wrote that, “Because reported capital gains and bonuses were. . .shifted forward from 2013 to 2012 [to avoid higher tax rates], we can expect a sizable drop in the top 1 percent’s reported income when the 2013 estimates come out a year from now. The befuddled media will doubtless figure out some way to depict that drop as an increase.” As predicted, the New York Times took one look at a 14.9% drop in top 1% incomes and concluded that “The Gains from the Recovery are Still Limited to the Top One Percent” That involved slicing the same old baloney very badly.

Three weeks later, on until February 17, The New York Times finally made a modest gesture of repentance.  In “Inequality Has Actually Not Risen Since the Financial Crisis,” David Leonhardt professed amazement at his own title.  “How could that be?”  This supposedly shocking revelation came from Stephen Rose, one of several liberal/progressive economists who do not let a policy agenda cloud their judgment about data.

“Fascinatingly,” writes Leonhardt, “Mr. Rose’s case is not based on a new or previously undiscovered data set. It’s based on the same statistics most commentators have been using to discuss inequality.” No kidding. On January 6, Gary Burtless of Brookings Institution wrote, “Since 2000 pre-tax and after-tax incomes have improved among Americans in the bottom 90% of the income distribution. Among Americans in the top 1% of the distribution, real incomes sank.” I had earlier displayed the same Piketty and Saez data shown in the nearby graph to make the same point. 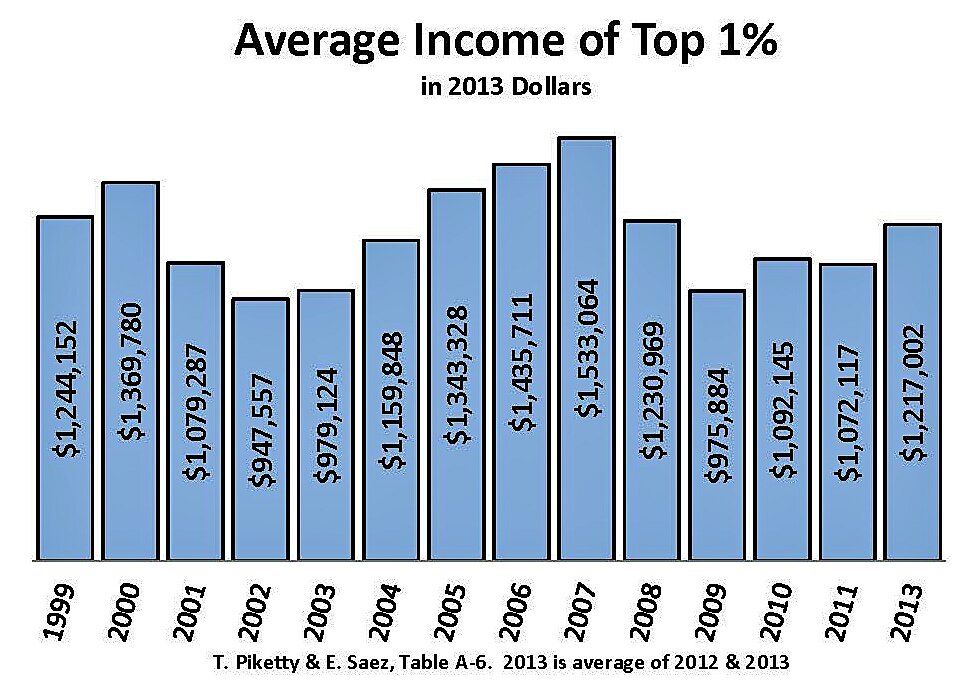