We’ve written about the outrageous sugar import quotas here many times. And Chris Edwards wrote in March about the American Sugar Alliance’s ad in the Washington Post titled “Big Candy’s Greed.” But we couldn’t link to the ad because for some reason the American Sugar Alliance has not chosen to put a version of the ad on its website. But the Alliance ran its expensive quarter‐​page ad in the Post last week, so we’re now able to provide the public service of making it available online.


Note that what candy producers and other sugar users want is to be allowed to buy sugar from the world’s most efficient producers at world market prices—just like every company in a free market. This protectionist nonsense “Big Candy” is fighting has been going on for decades. In 1985, the Wall Street Journal and then the New York Times reported that the Reagan administration had slapped emergency quotas on “edible preparations” such as jams, candies, and glazes—and even imported frozen pizzas from Israel—lest American companies import such products for the purpose of extracting the sugar from them. Apparently it might have been cheaper to import pizzas, squeeze the tiny amount of sugar out of them, and throw away the rest of the pizza than to buy sugar at U.S. producers’ protected prices.


As Chris Edwards noted, a critic of Big Sugar quoted in this article summarized the sad reality of sugar growers: “They are unlike any other industry in Florida in that they aren’t in the agricultural business, they are in the corporate welfare business.” 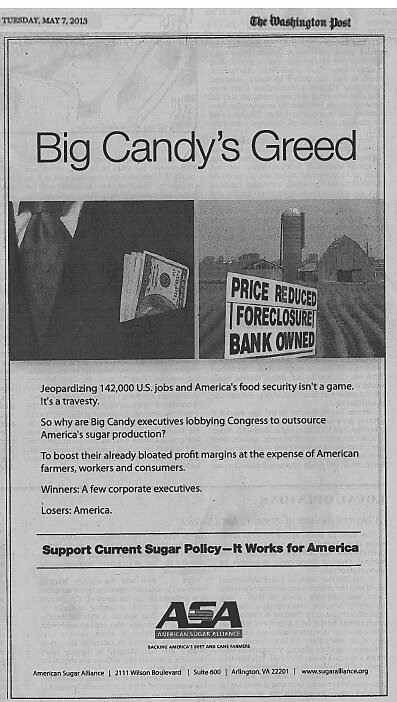