Traditional educators frequently claim that public charter schools are failing, even when evidence indicates that they perform no worse than traditional institutions on student test scores. This logic fails to recognize costs, which are paramount to educational success, primarily because wasted funds could otherwise be efficiently allocated towards further academic achievement. If students are receiving less public funding in charters, then choice schools are significantly outperforming residentially assigned institutions.

I just released a study with Patrick Wolf, Larry Maloney, and Jay May examining disparities in funding between students in charters and traditional public schools in 15 metropolitan areas in the 2013–14 school year. As shown in figure 1 from the report, students enrolled in a public charter school receive substantially less funding than those in traditional public schools in all but one location. In fact, we find that students in charter schools receive about $5,721 less in total annual funding than their peers in district schools. 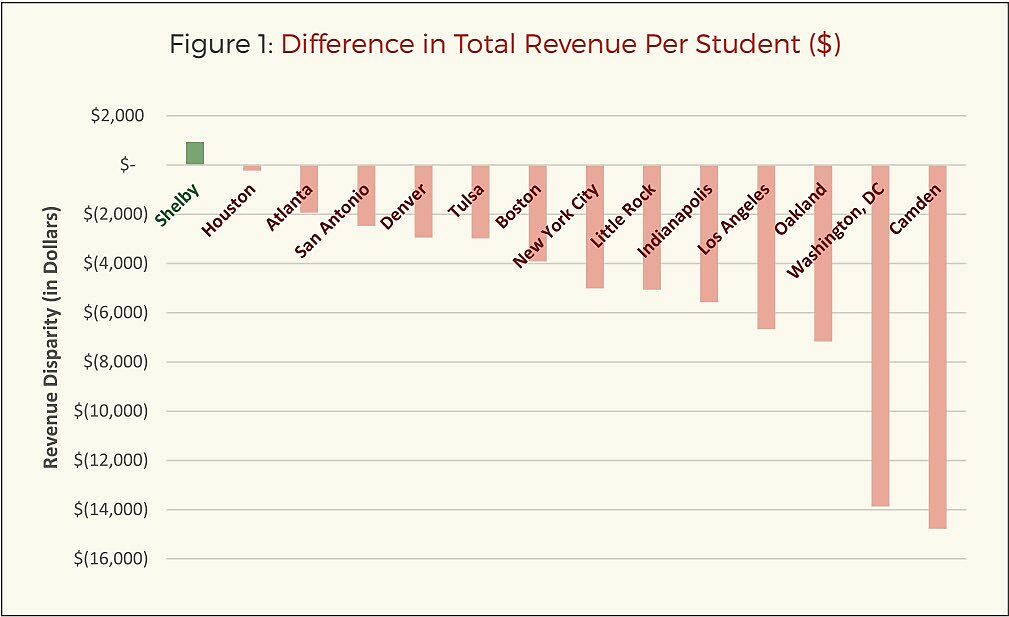 Critics of this type of evaluation often argue that funding disparities are due to differences in types of students. After all, traditional public schools (TPS) may have a larger proportion of students requiring additional educational resources. While the TPS in our study do enroll more special needs children, we find that these differences do not fully explain the funding gap between traditional public schools and public charter schools.

Funding inequity across the two sectors has only gotten worse over time. Eleven years after the research team first revealed that public charter schools receive less funding than their traditional public schools peers, the funding disparity had grown by about 79% in eight cities.

Should these results surprise us? If you could force your customers to buy your product at a high price, would you need to reduce expenses? Perhaps more importantly, if your customers could not leave, how would you know which costs to cut? The traditional system of schooling makes it impossible to allocate resources efficiently, even if local public school leaders are highly competent and benevolent.

Nonetheless, these findings are important for decision-makers to consider, especially if they care about improving student outcomes through efficiently allocating educational funding. Just imagine what would happen to the education sector if families could choose which institution to send their funds to. Schools would be rewarded for quality and efficiency, freeing up the resources necessary to improve the lives of millions of children around the nation.