Terrible mass shootings like the one at a Parkland, Florida high school are so shocking that it is easy to get the impression that mass shootings are increasingly common.  The number of deaths from mass shootings has been unusually high since 2007, because of five horrific incidents – Las Vegas (58), the Orlando nightclub (49), Virginia Tech (32), Sandy Hook (27), and the Texas First Baptist Church (26).  Statisticians would never try to fabricate a trend from such a small sample, even though the untrained eye may want to.

It isn’t your imagination: Mass shootings are getting deadlier and more frequent. A recent FBI report on “active shooters” from 2000 to 2015 found that the number of incidents more than doubled from the first to the second half of the period. Four of the five deadliest shootings in American history happened in the past five years, and 2017 already far exceeds any previous year for the number of casualties.

That FBI report “identified 160 active shooter incidents that occurred in the United States between 2000 and 2013,” with 486 people killed. The authors literally drew a straight line between just one incident in 2000 (after many in 1999) and 13 incidents in 2013, and called that a “rising trend.”

It is interesting, however, that schools have been the second-highest risk location. The FBI data show that the largest number of active shooting incidents from 2000 to 20016 were in workplaces and other commercial buildings (43%), followed by education facilities (22%), then open spaces (13%), government buildings (11%), residences (5%), health care facilities (3%) and houses of worship (4%).

The cited FBI data from 2000 to 2015 omit the two biggest mass shootings after 2015 and others before 2000.  In addition to Columbine, there were four other mass shootings in 1999, bringing yearly fatalities to 42 fatalities. We can’t be sure which mass shootings were “the worst in American history,” because (1) history didn’t begin with 2000, and (2) Congress didn’t define mass shootings as 3 killed until 2013, and (3) systematic data about such incidents were not collected until 2012.

Schulman mentioned a longer time series from Mother Jones, but not any data from it, so I created the graph below from the Mother Jones data. This project began in 2012 and attempted to recreate earlier years from news records going back to 1982. Early years report at most one or two incidents per year, which may indicate “headline bias” – finding only those incidents that were sufficiently sensational to attract national news coverage. 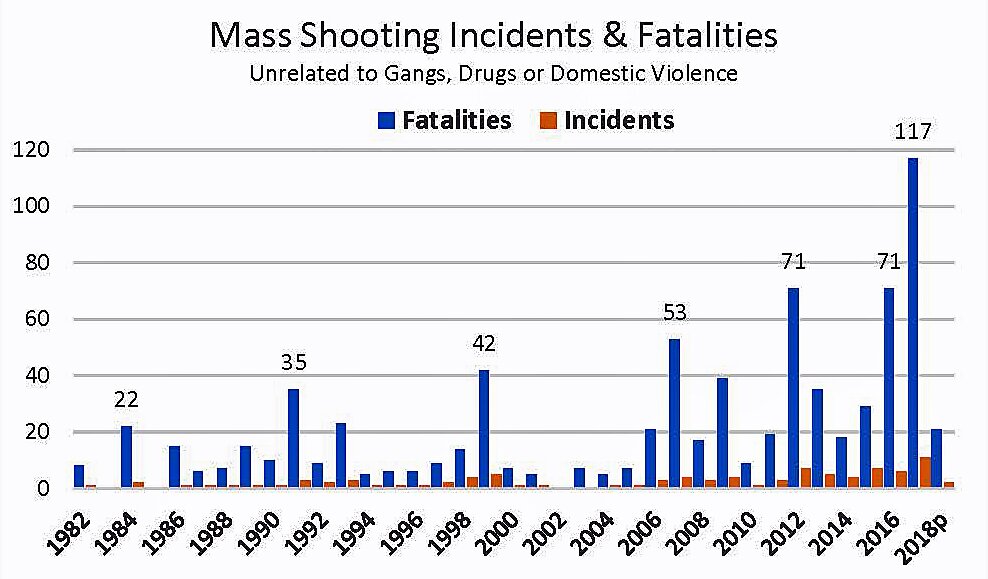 Importantly, the Mother Jones figures define mass shootings as public attacks in which the shooter and victims were generally unknown to each other, and four or more people were killed.  Unlike the FBI’s “active shooting incidents,” where gangs and drugs are frequently involved, Mother Jones excludes all multiple murders related to drugs, gangs or domestic violence. They do include mass shootings by jihadist terrorists, however, which accounted for only 4 of their 98 incidents by my count.

The Mother Jones writers claim that “A recent analysis of this [Mother Jones] database by researchers at Harvard University, further corroborated by a recent FBI study, determined that mass shootings have been on the rise.”  We already questioned the FBI trend.  What about those “researchers at Harvard University”?   Unlike the FBI, who compared the number of incidents between 2000 and 2013 to suggest such a rise, the trio of Harvard and Northeastern University researchers settled for only three years.

Rather than counting annual changes in a small number of mass shootings as the FBI did, the Harvard-Northeastern team instead counted the average period of time between incidents, and found them more frequent from 2011 to 2013 than the average from 1982 to 2010 (although the journalists’ count before 2012 is doubtful).

“The rate of mass shootings in the United States has tripled since 2011, according to an [October 15, 2014] analysis [of Mother Jones’ data] by researchers from Harvard School of Public Health and Northeastern University.”  That press release was not from the Department of Criminology, but from a subsection of the School of Public Health, which specializes in thinly-veiled advocacy of tough gun control laws.  “Since 2008,” they note, “we have received funding from the Joyce Foundation to write dozens of scientific articles on firearms issues, to disseminate findings through press releases, and Bulletins.”

It seems more transparent to simply examine annual estimates from the graph. Adding a preliminary estimate of 17 deaths from Parkland to the Mother Jones list brings the total number of deaths up to 816 from 98 mass shootings between 1982 and early 2018 – or just 23 deaths per year.  That makes this sort of random mass shooting one of the rarest mortality risks imaginable. Falling or the flu are far more dangerous. Even when it comes to guns, 23 deaths a year pales next to the number of homicides by firearms in 2014 alone, which was 11,208 (69% of all homicides)  and the number of suicides by firearms, which was 21,386 (50% of all suicides).

Every time one of these random mass shootings occurs, journalists and legislators invariably seize on the tragedy to lecture about the need for artfully unspecific changes in federal gun control laws. Of all the risks posed by guns or knives, however, random mass shootings are among the least likely.