Congress passed the Fair Labor Standards Act (FLSA) in 1938 to regulate certain employment practices between employers and employees. In order to put the law into effect, Congress delegated authority to the Department of Labor (DOL) to enforce the statute’s provisions. It’s a fundamental legal principle, however, that an executive-branch agency may only regulate those provisions that Congress has actually put into its authorizing statute. Where Congress has not address a certain practice, the agency has no authority to regulate and the practice is presumptively legal.

Fast forward almost 80 years. E.I. Du Pont De Nemours and Co. (better known as DuPont), following standard industry practice, paid their employees for otherwise noncompensable meal breaks, using that compensation as credit towards the time employees spent performing certain work duties (especially “donning and duffing” special clothing and gear) before and after their shifts. The employees sued DuPont in federal court, arguing that the FLSA forbids this type of crediting and that they must be paid overtime pay for the donning/duffing time.

The district court disagreed, finding that the statute was silent about the practice and so DuPont had done nothing illegal under the FLSA. On appeal, the U.S. Court of Appeals for the Third Circuit invited DOL to file an amicus brief regarding whether DuPont had violated the law—essentially allowing it to regulate. DOL admitted in its brief that the FLSA was silent on the issue, but argue that the statute implicitly forbade the practice. The Third Circuit then adopted that view by granting DOL Skidmore deference (by which judges defer to agency interpretations according to their persuasiveness), and reversed the district court’s ruling.

Following Trump’s electoral success in rustbelt states, the spotlight has been on white, rural, post-industrial poverty. J.D. Vance, author of the now-famous memoir Hillbilly Elegy, discussed some possible explanations for rural poverty yesterday in a podcast. In the interview, he suggests that geographic (im)mobility is partly to blame for the erosion of areas like Appalachia: the poor simply aren’t migrating to jobs.

Vance is right that Americans have limited interest in relocating, and are relocating less than before. According to calculations[1] using University of Chicago data, the proportion of individuals unwilling to relocate for work is high: 42% of Americans say they will not move within the United States for work, and 68% of Americans will not move outside the country for work. A full quarter (25%) of Americans would not consider traveling further for a job, even if the decision resulted in unemployment. Meanwhile, Census data suggests that relocation—whether inter-state, inter-county, or intra-county—is down (Figure 1). 2016 had the lowest relocation rate in seventy years (Figure 2).

Donald Trump’s first 100 days in office have set U.S. foreign policy on a dangerous course. Trump’s actions and rhetoric have raised the profile of America’s military power while weakening other sources of U.S. influence. Such an approach is in line with the “peace through strength” formula Trump espouses. However, the deepening militarization of U.S. foreign policy carries a host of risks and costs that may cause more headaches than victories.

The growing role of the military in U.S. foreign policy is not a new phenomenon. Barack Obama’s presidency was hardly peaceful. This was especially true in the Middle East, where the “light footprint” approach reduced the on-the-ground U.S. military presence but made extensive use of air power to conduct foreign policy by precision strike. However, Obama also spearheaded multilateral initiatives that relied on other sources of American power and influence, such as the Iran nuclear deal and the Trans Pacific Partnership (TPP). Not all of these initiatives were successful, but they demonstrate a foreign policy approach that places value on non-military tools.

The White House denounced a federal judge this week that enjoined the president’s executive order denying certain federal grants to sanctuary cities, and it raised the case of Kate Steinle to illustrate why sanctuary cities are such a problem. Almost two years ago, Steinle, a 32-year-old medical device sales rep from California, was shot and killed on a San Francisco pier. City police have charged an unauthorized immigrant named Juan Francisco Lopez-Sanchez who has confessed to killing her. Her death led Donald Trump to denounce sanctuary cities such as San Francisco and call for tougher border security and deportations. But in reality, the facts of this tragedy do not support these policies:

Lopez-Sanchez is a Mexican national who had resided illegally in the United States on and off since at least 1991. In the early 1990s, he compiled various drug convictions in Arizona, Washington, and Oregon. Immediately following his conviction for imitation drugs in Oregon in June 1994, the federal government took custody and deported him to Mexico. A month later, he returned to Arizona and was arrested for violating his probation there. After the state released him, San Francisco arrested him for a $20 marijuana purchase charge, but he failed to appear in court, and seven months later, Washington convicted him of another felony drug charge. In April 1997, the federal government took custody and deported him again.

Thus, from 1997 to 2015, Lopez-Sanchez probably never crossed the U.S.-Mexico border without being caught. The case is hardly an example of the lack of border security. Indeed, he highlights the myth of border insecurity.

Yesterday, Federal Communications Commission Chairman Ajit Pai announced his intention to reverse Obama administration "net neutrality" rules governing the internet that were put in place in 2015. Some commentators are criticizing the announcement as a give-away to large telecom companies and an attack on consumers. But the Obama rules create some serious problems for consumers—problems that Pai says he wants to correct.

Under the Obama rules, internet service providers (ISPs) are subject to "rate-of-return" regulations, which the federal government previously applied to AT&T's long-distance telephone service back when it was a monopoly more than 50 years ago. Ostensibly, rate-of-return regulation gives government officials the power to review and approve or reject ISP rates. In reality it basically guarantees ISPs government-enforced market protection and profitability, in exchange for regulators ensuring that ISPs won't be too profitable.

As explained in this 2014 post, rate-of-return regulation involves more than just telecom. It is an attempt to settle fights between "producers" and "shippers"—whether those are farms, mines, and factories on one side and railroads and shipping lines on the other, or Netflix and Hulu on one side and ISPs on the other. In all those cases, the producers and shippers need each other to satisfy consumers, but they fight each other to capture the larger share of consumers' payments. If shippers charge more, then farmers, factories, and Netflix must charge less in order to maintain the same level of sales.

The political resolution of the producer–shipper fights was the Interstate Commerce Act of 1887 and its rate-of-return regulations, which were initially written with railroads in mind. Similar efforts were later extended to trucking, air transportation, energy, and telecom. It took about 100 years for policymakers to accept that those efforts hurt consumers much more than it helped them, forcing on consumers too many bad providers with high prices and poor quality.

The beauty of the United States where policy is concerned is that state variations allow for lots of decent analysis. Nowhere is this more clear than on the minimum wage, where a fascinating new empirical paper by Terra McKinnish from the University of Colorado Boulder adds further light as to whether Econ 101 holds in regards to raising statutory pay rates.

Remember, there are (to simplify) two main theoretical stories of the labor market. In an ordinary competitive model, imposing a minimum wage above the equilibrium wage rate leads to an increase in the quantity of labor supplied (more people want to work at the higher wage) and a reduction in the quantity demanded (employers want fewer worker hours at the higher price). The difference between the two is the increase in “unemployment” – i.e. the difference between the worker hours people are willing to work and the demand for worker hours at that wage rate. Raising the minimum wage in a competitive labor market is said to have “disemployment effects.”

In the past decade though, some academics have posited a different theory of the labor market, implying that all or many employers have “monopsony power” - monopoly power but in the purchase of labor. Profit maximization would lead firms to pay less than the value of the marginal product of labor and employ less labor-hours than would be the case in a competitive market. The implication is that when there is a strong element of monopsony in the labor market, the imposition of a higher minimum wage can lead to both an increase in pay per hour and an increase in hours of employment. Workers would gain unequivocally from the minimum wage, while previously exploitative employers would lose.

Let’s put aside for a second that in reality the labor market is complex, dynamic, and there could be elements of both. Empirically, the question is which provides a better explanation of the real labor market we see.


Has that ever happened?


One possible objection is that larger budget deficits were caused by recessions, which is why bond yields did not rise with larger deficits or fall with surpluses. The graph addresses this concern by using CBO estimates [.xls] of cyclically‐​adjusted budgets (“with automatic stabilizers,” in CBO vocabulary). 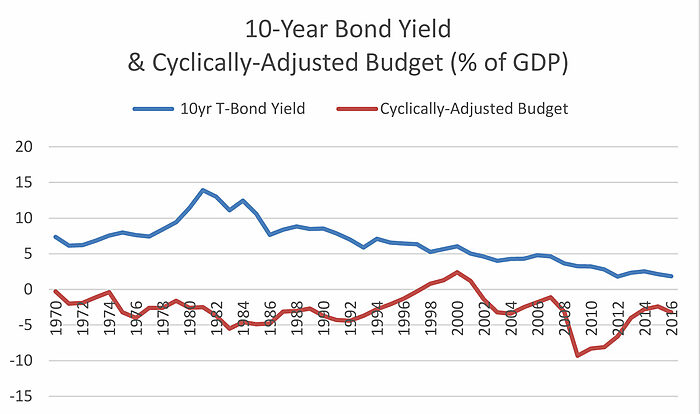 Still, there is clearly no correlation between bond yields and any measure of yearly budget deficits and surpluses. And that is also true in other times and places – Japan’s chronic large deficits and debt being an obvious example.


Another possible objection centers on Feldstein’s use of the phrase “projected budget deficits,” as though the CBO’s notoriously inaccurate long‐​run projections could somehow have an entirely different effect from actual deficits. I criticized the analysis and evidence behind that conjecture in a Treasury Department presentation which was condensed and simplified in a Cato Institute paper. I found the underlying analysis illogical and contradictory and the evidence worthless.


There is no need to make up stories about alleged effects of deficits on bond yields in order to make a strong case for minimizing frivolous government borrowing (e.g., to pay for transfer payments or government employee compensation).


Chronic deficits add to accumulated debt, and that debt will have to be serviced with future taxes even if it is rolled‐​over indefinitely. That is reason enough for Congress to keep growth of federal spending below the growth of the private economy – a task which requires frugality in spending but also a tax and regulatory climate which minimizes impediments to investment, entrepreneurship, education and work.