The fog of war, coupled with the output from multiple propaganda machines, makes it difficult to determine which side has the upper hand in any conflict. In Syria, it appears from recent reportage from Aleppo that President Bashar al-Assad’s forces are getting the upper hand. But are they?


The best objective way to determine the course of a conflict is to observe black market (read: free market) exchange rates, and to translate changes in those rates via purchasing power parity into implied inflation rates. We at the Johns Hopkins–Cato Institute Troubled Currencies Project have been doing that for Syria since 2013.


The two accompanying charts—one for the Syrian pound and another for Syria’s implied annual inflation rate—plot the course of the war. It is clear that Assad and his allies are getting the upper hand. The pound has been stabilizing since June of this year and inflation has been trending downwards. 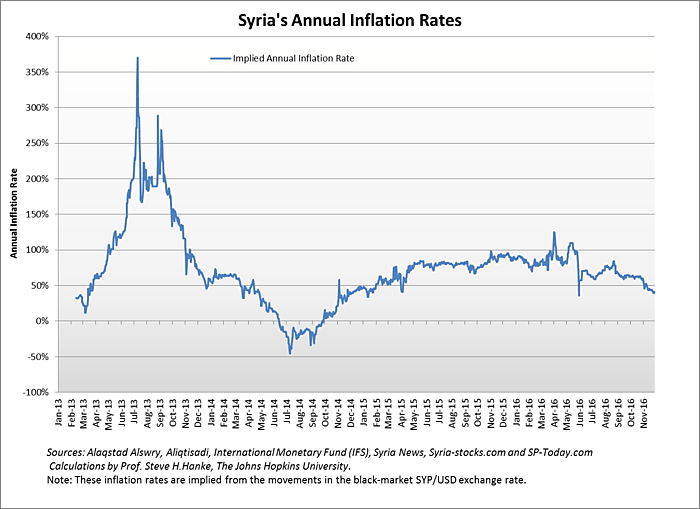 In yesterday’s Investor’s Business Daily, Club for Growth President David McIntosh and I had a short piece on the perilous implications of President-elect Trump’s threats to unilaterally withdraw the United States from our trade agreements or impose punitive and wide-ranging tariffs on imports. The economic effects of Trump’s promises have been explored at length (see, e.g., this new one on NAFTA and Texas), but most trade law experts are just now digesting the legal issues. What we’re finding is, to use the technical term, a big mess that could have unforeseen economic and constitutional implications in the Age of Trump. As we note:

For almost a century, American trade policy has been formed and implemented by a successful "gentlemen's agreement" between Congress and the president. Congress delegated to the president some of its Article I, Section 8 powers to "regulate Commerce with foreign nations" so that the president may efficiently execute our domestic trade laws. The president negotiates and signs FTAs with foreign countries, while Congress retains the ultimate constitutional authority over international trade, for example by approving or rejecting agreements or by amending US trade laws.

As a result of this compromise, the United States has entered into 14 Free Trade Agreements with 20 different countries and imposed targeted unilateral trade relief measures — all without significant conflict between Congress and the President.

The question now is whether Mr. Trump, as president, could and should single-handedly implement his trade agenda on Jan. 20, 2017 without any congressional action.

The IBD op-ed scratches the surface of these legal issues, but below are more details on just a few of the many ambiguities lurking in U.S. trade law—ambiguities that, if not properly clarified, could be exploited by a protectionist U.S. president against the original intent of the Congress that delegated their constitutional authority over trade policy under the (incorrect!) assumption that the president would always be the U.S. government’s biggest proponent of free trade.

We released The Human Freedom Index 2016 today. It is our second annual report that presents the state of overall freedom in the world based on a broad measure of personal, civil and economic freedom. Co‐​published by the Cato Institute, the Fraser Institute (Canada) and the Liberales Institut (Germany), my coauthor Tanja Porcnik and I look at 79 distinct indicators in 159 countries on issues ranging from freedom of speech and association to women’s freedoms, the extent of voluntary exchange, safety and security, the rule of law and more.


Given the rise of populism, nationalism and authoritarianism in many countries around the world in recent years, we think that it is becoming increasingly important not only to appreciate the inherent value of freedom, but also to better appreciate its central role in human progress. For that reason, we think it’s worth measuring carefully.


The top 10 freest jurisdictions are below. The United States ranks 23rd. Compared to 2008—the earliest year for which we have sufficient data for a robust index—the United States has been on a decline; it ranked 16th that year. In terms of economic freedom, for which we have decades of comparable data, the United States has been on a long‐​term decline since the year 2000. Surely, the war on drugs, the war on terror, the expansion of the regulatory state, the rise of crony capitalism and the erosion of property rights due to the abuse of eminent domain have contributed to the U.S. fall in the rule of law and overall human freedom. The United States can unfortunately no longer claim to be the world’s bastion of liberty.

Other country rankings of interest include Chile (29), the freest country in Latin America, while Venezuela (154) is the least free in the region (we don’t measure Cuba because of a lack of reliable data). India ranks 87th, Russia 115th and China 141st. Turkey ranks 73rd, South Africa 74th, Brazil 82nd and Egypt 144th.

We also find a strong correlation between human freedom and democracy, which we measure separately. Hong Kong is an outlier in this regard and, given Beijing’s increasing interference there, we are concerned about it maintaining its high level of freedom. Read a discussion on that and more in the full report.

At 6:55 this morning President‐​elect Donald Trump tweeted. “Nobody should be allowed to burn the American flag — if they do, there must be consequences — perhaps loss of citizenship or year in jail!” Seemingly unprovoked—we’ve hardly seen a rash of flag‐​burning lately—it’s one more sign that we’re likely in for a wild ride over the next four years, assuming impeachment doesn’t occur first.


There’s a market for such views, to be sure, although most who voted for Mr. Trump probably are not in it. Liberty‐​loving Americans understand that there’s all the difference in the world between defending the right to burn the flag and defending the burning of the flag. It’s the difference between rights and values. Voltaire is said to have put it succinctly: “I may disagree with what you say, but I’ll defend to the death your right to say it.” (It’s probably apocryphal, but he should have said it!) Popular speech doesn’t need defending; unpopular speech does.


That principle is so basic to our political and legal order that the Framers of our Constitution embedded it in the First Amendment. And when there was a rash of flag‐​burning a while ago, the Supreme Court upheld the right to desecrate the flag, first in 1989 against a Texas statute, a year later against an act of Congress. Justice Antonin Scalia, lauded often by Mr. Trump, joined the majority in the first case. He wrote the opinion for the Court in the second.


But the issue does not seem to die. Republicans pressed for a constitutional amendment to ban flag desecration in 1995, shortly after they took over Congress following 40 years in the wilderness. And the proposed amendment arose again in 1999. Invariably, a misguided patriotism is behind such efforts. But as I concluded my congressional testimony opposing such an amendment in that last instance:

It is said also that the flag is special because men have fought and died for it. Let me suggest in response that men have fought and died not for the flag but for the principles it represents. People give their lives for principles, not for symbols. When we dishonor those principles, to protect their symbol, we dishonor the men who died to preserve them. That is not a business this Congress should be about. We owe it to those men, men who have made the ultimate sacrifice, to resist the pressures of the moment so that we may preserve the principles of the ages.

There doubtless will be occasions ahead when we will have to resist the pressures of the moment to preserve the principles of the ages. We must steel ourselves for that.

Cato Senior Fellow Nat Hentoff once had the opportunity to interview Fidel Castro’s henchman, Che Guevara. As Nat relates in this video clip, Che’s gatekeeper messed up–just assuming that since Nat wrote for the Village Voice, he would be another fawning lefty journalist. Wrong!

In 2003, Nat wrote: “Having interviewed Cubans who survived Castro’s gulags, I have never understood or respected the parade of American entertainers, politicians and intellectuals who travel to Cuba to be entranced by this ruthless dictator who, for me, has all the charisma of a preening thug.”


And here’s Richard Cohen in today’s Washington Post: “Fidel Castro was a killer. He came to power in a revolution and so violence was probably inescapable. But he followed it with mass executions — the guilty, the innocent, it hardly mattered. He imposed a totalitarian system on Cuba even harsher and more homicidal than the one that preceded it. He persecuted homosexuals, dissidents, critical writers and journalists. He would not tolerate a free press, and his own political party was the only one permitted. In the end, he ruined his country’s economy while at the same time exporting terrorism.” Read the whole thing.

This makes perfect sense — in a country ruled by the Communist Party:

Of course, it would be crazy in a capitalist country ruled by a party committed to free enterprise.

As the Washington DC City Council prepares to vote on a bill that would provide workers in Washington, DC up to 11 weeks of paid family leave upon the birth of a child, a fundamental question remains unanswered: how much should government intervene in how employers compensate workers?

The tax code also nudged American businesses to provide pensions as well, since the money set aside in a defined benefit plan generally isn't taxed. When pension law created the tax breaks for employer-provided health insurance these spouted up instead.

In the heyday of unionism, labor union leaders pushed for more fringe benefits for their workers, often more fervently than they sought out wage increases. They did so in part because of the tax break—why not get a tax-free benefit for workers rather than have workers pay for the same benefit with after-tax wages, they reasoned—and partly because such benefits could be made more durable than other forms of compensation. For instance, the UAW contracts in the 1970s-1990s typically provided health insurance for laid-off workers for up to a year after they were let go, and sometimes longer.

This wasn't necessarily a good thing for the U.S. economy. Rigid compensation meant that companies resorted to overtime when demand picked up rather than hire more workers. While it also deterred them from laying off workers when there was a downturn in demand since the attendant cost savings would be slight, the short-term stability was an ephemeral benefit to workers. There were fewer jobs available as a result and it did nothing to encourage employment growth in such industries.

Some of these benefits were jettisoned—or at least scaled back—after the bankruptcy of GM and Chrysler in 2008—fifteen years after at Caterpillar—and today the manufacturing workers in a union are much more likely to have a 401k, health insurance with co-pays, deductibles and a monthly contribution, and modest ancillary benefits.

Unions changed course only in part because of their reduced leverage after the diminution of manufacturing in the U.S. economy. They also perceived that their workers would rather have money than an additional benefit. Also, the realization that many workers' manufacturing jobs may be less permanent than a generation ago also helped change demand. A long-term benefit means little for someone who worries that their job may not exist after the next recession.