As health concerns for former President Carter mount, it’s nice to be able to look back on his time in the White House and see something remarkably positive. Carter’s deregulation of air travel, commercial trucking, rail shipping and oil have delivered substantial and ongoing dividends to Americans. In today’s Cato Daily Podcast (Subscribe: iTunes/RSS/CatoAudio for iOS), Peter Van Doren discusses how those policy changes occurred.

An e‐​mailer reminds me that Carter’s pen also sealed the deal ending the longstanding prohibition on home brewing of beer for personal consumption. Anyone who appreciates craft beer today owes a small thanks to Carter for getting the feds out of the way of the small‐​scale tinkerers who eventually became today’s craft beer entrepreneurs.

As the Guardian recently reported, technology has created more jobs than it has destroyed, and the new jobs it has created have been of higher quality. Technology eliminated many difficult, tedious, and dangerous jobs, but this has been more than offset by a rise in the caring professions and in creative and knowledge‐​intensive jobs, resulting in a net increase in jobs. The sectors to lose the most jobs have been agriculture and manufacturing, which are both difficult and dangerous, while work opportunities in medicine, education, welfare, and professional services have become more abundant. (For example, there are more teachers per student, improving student‐​teacher ratios, and there are also more physicians per person than in the past). 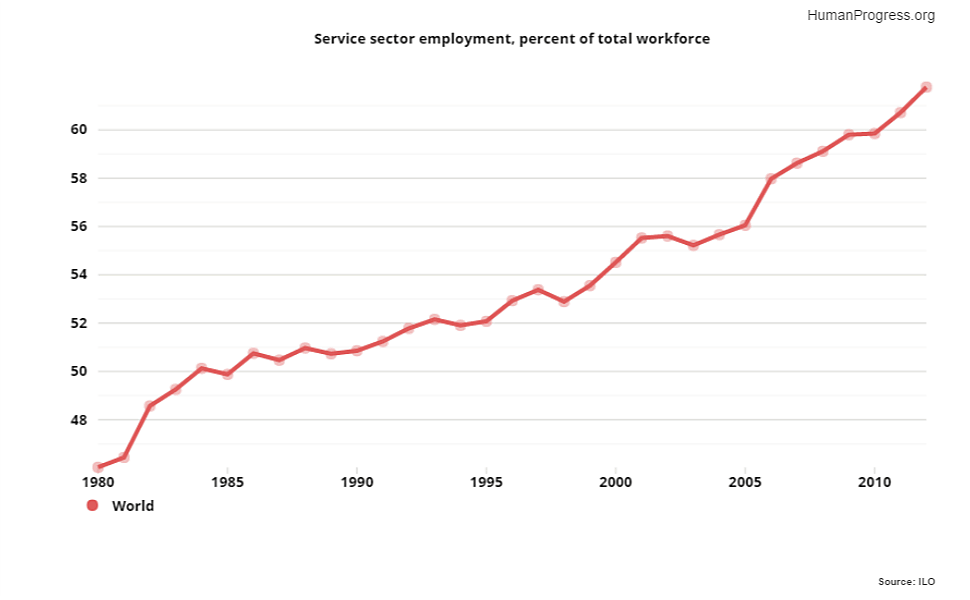 In 1980, almost a quarter of the world’s employment was still in agriculture. Now, only around 15% of the world’s workers are engaged in agricultural labor. Yet we are feeding more people, undernourishment is at an all‐​time low, and food is becoming less expensive. Technological advances liberated humanity from toiling in fields by mechanizing many processes and boosting productivity, allowing more food to be produced per hectare of land, and freeing hundreds of millions of people to pursue less grueling work. 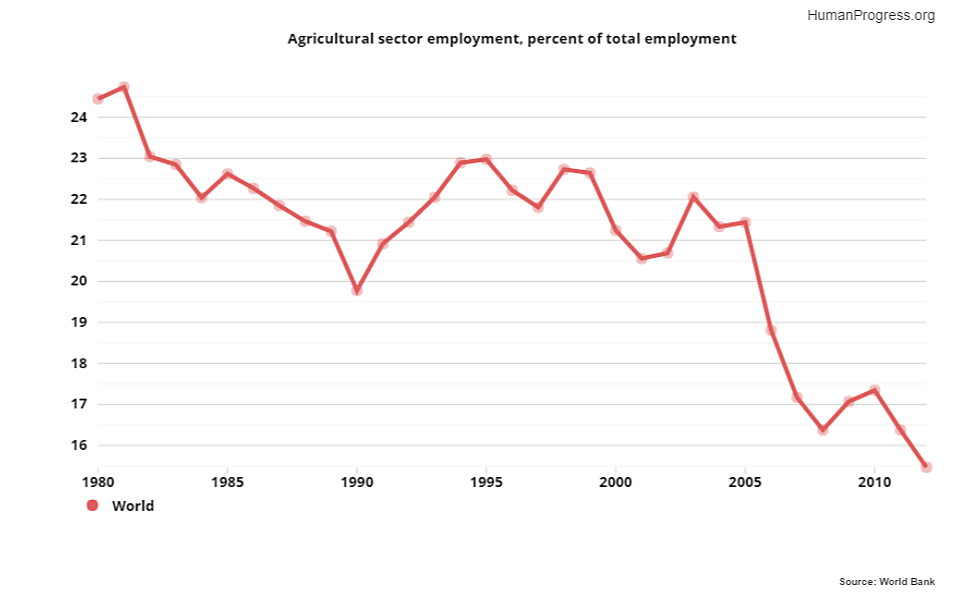 The elimination of so many unsafe jobs in manufacturing and agriculture means fewer worker deaths. According to data from the International Labor Organization, from 2003 to 2013, the number of work fatalities in the world decreased by 61% (i.e., over 20,500 fewer deaths). This occurred even as the world population grew by over 700 million over the same time period. If the most dangerous thing you have to face at work is the threat of a paper cut, you quite possibly have technological innovation to thank for that. 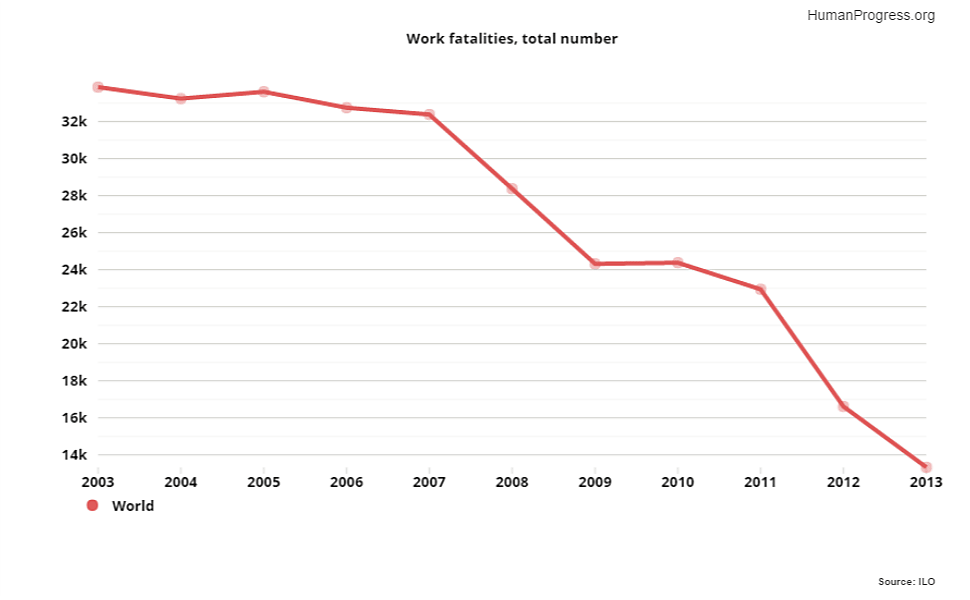 Even if in the future robots steal some jobs, advancing technology will likely make several higher‐​quality jobs available for every job lost. As the Guardian article cited earlier says, technology has proven to be a “great job‐​creating machine,” eliminating toilsome work but bringing into existence more—and better—opportunities than it takes away.


But note that behind every machine, there lurks human ingenuity. As Matt Ridley wrote in his book The Rational Optimist:

It is my proposition that the human race has become a collective problem‐​solving machine and it solves problems by changing its ways. It does so through innovation driven often by the market.

Learn more about what market‐​driven technological innovation has done to improve the state of humanity at Human​Progress​.org.

Merely Saying “I Do” Multiple Times Shouldn’t Be a Crime

Saying “I do” and calling someone your spouse who legally isn’t shouldn’t be a crime, but it can be in Utah. While polygamy—being lawfully married to multiple people—isn’t legal in any state, due to its unique history, Utah has some of the strictest anti-bigamy laws in the country. Which probably makes starring in a reality TV show based on your plural marriage not the best idea for Utahns.

Nevertheless, TLC’s Sister Wives revolves around Kodi Brown, his four partners (Meri, Janelle, Christine, and Robyn), and their 17 children. While Kodi is only legally married to one of women, he claims he is in a “spiritual union” with each of the others, and describes all four as his wives—and that puts the Browns on the wrong side of Utah’s bigamy law. The day after the show premiered in 2010, local authorities announced they were investigating the family.

Because the potential sentences are quite severe (five years for each of the women, and up to 20 years for Kodi), the Browns took preemptive action, filing a federal lawsuit challenging the constitutionality of Utah’s law. The district court agreed. In granting the Brown’s motion for summary judgment, the court held that because the law criminalizes “spiritual cohabitation” (arrangements where the participants claim to be part of multiple religious marriages, but make no attempt to obtain state recognition), it violated the First and Fourteenth Amendments, and was “facially unconstitutional.” The state has appealed that ruling.

Together with First Amendment scholar Eugene Volokh, Cato has filed an amicus brief urging the U.S. Court of Appeals for the Tenth Circuit to affirm the district court. Whether or not the Utah law violates the Browns’ religious liberty, it’s a clear affront to the First Amendment’s protection of free speech.

China is implementing its “toughest‐​ever” mobile phone real‐​name registration system, according to the Want China Times. The effort seeks to get all remaining unregistered mobile phones associated with the true identities of their owners in the records of telecommunications firms. Those who do not register their phones will soon see their telecommunications restricted.


This policy will have wonderful security benefits. It will make identity fraud, anonymous communication, and various conspiracies much easier to detect and punish—including conspiracies to dissent from government policy.


The United States is a very different place from China—on the same tracking‐​and‐​control continuum. We have no official policy of registering phones to their owners, but in practice phone companies collect our Social Security numbers when we initiate service, they know our home addresses, and they have our credit card numbers. All of these are functional unique identifiers, and there is some evidence that the government can readily access data held by our telecommunications firms.


We have no national ID that would be used for phone registration, of course. The Department of Homeland Security says it will begin denying travel rights to people from states that do not comply with the REAL ID Act beginning in 2016.

The centerpiece of both “replace” plans is a refundable tax credit for health insurance. Yet such tax credits already exist, in Obamacare. Also like Obamacare, the Walker/​Rubio tax credits would allow Washington to decide how much coverage you purchase, penalize you if you don’t buy that government‐​defined plan, and conceal massive redistribution of income under the rubric of tax cuts…


How would Walker and Rubio pay for their new spending? Would they keep Obamacare’s tax increases? Raise taxes elsewhere? Would they finance new health care spending by cutting existing health care programs? If so, chalk up yet another way their plans would resemble Obamacare.

Conservatives can offer a better “replace” plan that is politically feasible by expanding a bedrock conservative initiative: health savings accounts, or HSAs, which have already enabled 14.5 million Americans to save more than $28.4 billion for their medical expenses tax‐​free.


Expanding HSAs would give workers a $9 trillion effective tax cut, without cutting spending or increasing the deficit, and would drastically reduce government control over Americans’ health decisions. Most important, “large” HSAs would spur innovations that make health care better, cheaper, and more secure — particularly for the most vulnerable.

Conservatives need to get this right, lest they repeat the same mistake they made in 1993–94.

For decades, prominent conservatives advocated an individual mandate. The left then picked up the idea and gave us Obamacare. Before they once again fall into the same trap, conservatives should drop any support for the implicit mandate of health‐​insurance tax credits. Expanding HSAs is more compassionate and provides a direct route toward freedom and better health care.

For more on Large HSAs, see here, here, and here.

Rules of Origin for Autos in the TPP

As the Trans‐​Pacific Partnership negotiations enter their final stage, one issue remaining to be resolved concerns rules of origin for automobiles. Rules of origin determine how much of a product needs to be made within the free trade area in order for it to receive duty‐​free treatment. This is a tricky issue for automobiles because automakers rely heavily on global value chains where different parts are made in different countries.


Japan wants very liberal rules of origin because its industry’s supply chains include non‐​TPP countries like Thailand. Canada and Mexico want very strict rules of origin, because their industries benefit from preferential access to the U.S. market through the North American Free Trade Agreement.


Canada and Mexico’s position in the TPP talks is protectionist. It’s also a consequence of negotiating trade liberalization through regional agreements. In the same way that industries who benefit from protectionism oppose the reduction of trade barriers, industries that benefit from preferential access through trade agreements oppose the reduction of other trade barriers.


If negotiations at the World Trade Organization continue to flounder and regional agreements like the TPP proliferate, rules of origin will become a larger and larger problem for global trade.

Should NSA Be Immune from Constitutional Scrutiny?

Today the Court of Appeals for the DC Circuit issued a ruling in NSA v. Klayman that has almost no practical effect, but is a potent illustration of how excessive secrecy and stringent standing requirements effectively immunize intelligence programs from meaningful, adversarial constitutional review.


Contrary to some breathless headlines, today’s opinion does not “uphold” the NSA’s illicit bulk collection of telephone records—which, thanks to the recent passage of the USA Freedom Act, must end by November in any event. Rather, the court overturned an injunction that only ever applied specifically to the phone records of the plaintiffs. And they did so, not because the judges found the program substantially lawful, but because the plaintiff could not specifically prove that his telephone records had been swept into the database, even though the ultimate aim of the program was to collect nearly all such records.


Together with other similar thwarted challenges to mass government surveillance—most notably the Supreme Court case Clapper v. Amnesty International—the decision sends the disturbing signal that mass scale surveillance of millions of innocent people by our intelligence agencies is, for all practical purposes, immune from meaningful constitutional scrutiny. Even when we know about a mass surveillance program, as in the case of NSA’s bulk telephony program, stringent standing rules raise an impossibly high barrier to legal challenges. Perversely, the only people with a realistic chance of challenging such programs in court are actual terrorists who the government chooses to prosecute. The vast, innocent majority of people affected by bulk surveillance—those with the strongest claim that their rights have been violated—are effectively barred from ever having those rights vindicated in court.


Given the routine refusal of courts to step in to protect our Fourth Amendment rights, it is fortunate that Congress has already acted to bring this intrusive and ineffective program to a halt.