How much does Congress spend on Veterans Affairs, the IRS, or Customs and Border Protection? How much has spending increased over time?


You can answer those questions quickly and easily with Cato’s updated charting tool for the federal budget.


The tool allows you to plot real outlays for about 500 departments, agencies, and programs, 1970–2014. All data is from the Office of Management and Budget.


The chart page opens blank. Click “+” to open a department and then check boxes for the departments, agencies, and programs you want to plot.


To save your chart as an image or a pdf, right click on it.


This chart shows spending on the three largest federal agencies. The data is in constant 2014 dollars. 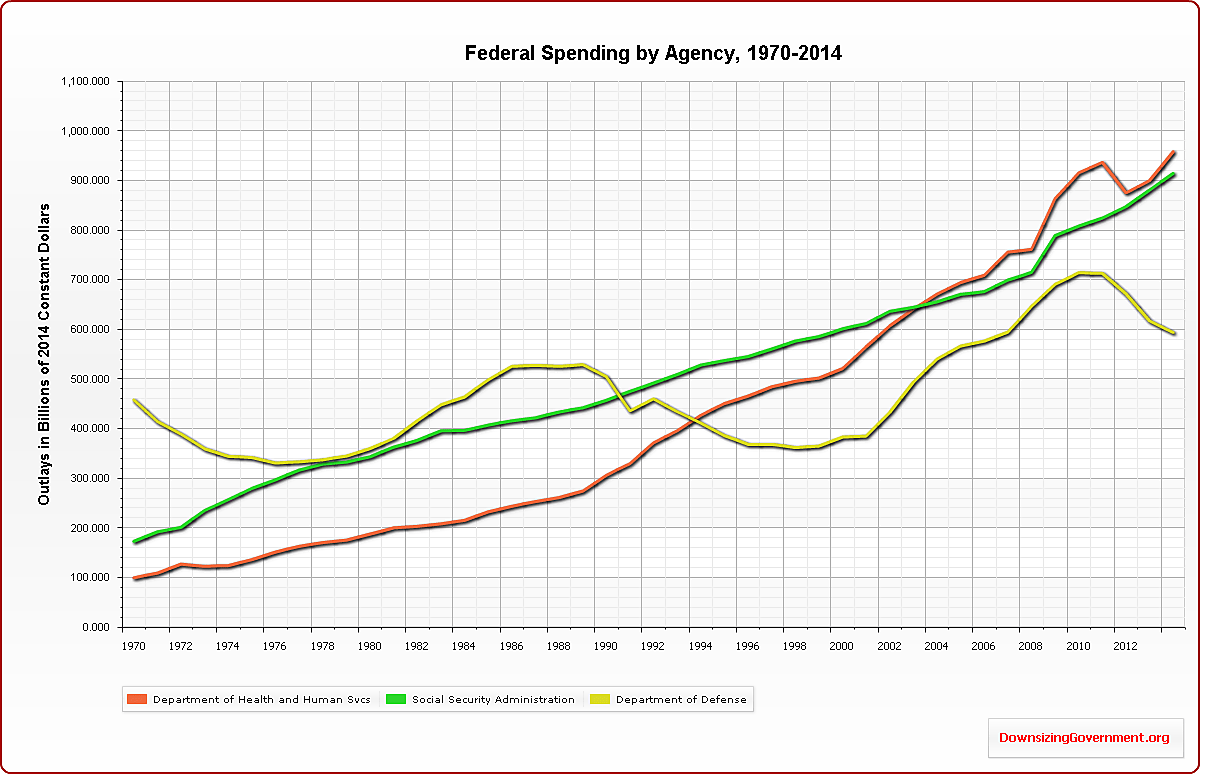 The Republic of Gilead Is Not Nigh

If you were judging only from the outraged reaction  online, you could be forgiven for thinking that the Supreme Court's ruling in Burwell v. Hobby Lobby had just mandated the adoption of Margaret Atwood's The Handmaid's Tale as the blueprint for American society.  Yet as my colleague Ilya Shapiro notes, there's a profound disconnect between all the rhetoric about "denial of access" to contraception and the substance of the ruling.

At the heart of the majority's opinion is this: The Department of Health and Human Services has already developed a way to exempt religious non-profit corporations—such as churches, charities, and hospitals—from the legal mandate to pay for employees' contraception coverage.  In what amounts to an accounting trick, they permit those corporations to purchase plans without such coverage, and then require that insurance companies themselves independently provide it to the uncovered employees.  Because pregnancy is quite a bit more expensive than contraception, this apparently ends up not imposing any additional net cost on the insurers.  The result is that employees of religious non-profits end up with no-copay contraception coverage, exactly as if the employer were required to provide it directly, but the employers are satisfied by this ledger shuffling that they aren't being compelled to violate their most deeply held moral convictions.  Which, one would think, is a win-win.

Against this background, the Court simply held that since HHS has already found a way to achieve the government's aim of ensuring employees have access to free contraception without compelling non-profit employers to act against their profound religious convictions, they must do the same in the case of for-profit employers, at least where the for-profit corporation is "closely held."  The majority quite explicitly denied this ruling has any implications for cases where there might not be such a happy win-win means of achieving the government's ends, at no additional cost, without forcing employers to violate their convictions. As Justice Alito's opinion emphasizes:

Hobby Lobby, Harris, and Stealing Each Others’ Clothes

Legal issues have a way of changing form over the years in such a way that the liberal and conservative teams, such as they are, each periodically migrate over to occupy the positions the other formerly held. Examples from today’s two big cases:

Has anyone tried to compile a list of all the various issues in which liberal and conservative blocs have traded positions with each other over living memory? I suspect it would be a long one.

Liberty at the High Court: Not Just (A) Hobby

As someone observed, the pundit world showed deep interest in Harris v. Quinn for about twenty minutes, after which Hobby Lobby was announced and it seemed everyone wanted to talk about that and nothing else.


My own opinion is that Harris was the more important decision today and Hobby Lobby the less, because constitutional law endures. When Congress sooner or later gets around to amending RFRA, Obamacare, or both, Hobby Lobby, a case of statutory interpretation, will become a footnote of purely historical interest. That doesn’t happen with a First Amendment case, unless of course it is overruled, overturned by Constitutional amendment, etc.

The Practical Impact of Harris v. Quinn: A Major Blow to Organized Labor

As noted in this previous post, the Supreme Court’s decision today in Harris v. Quinn does not remake private-sector labor law but does put an end to one of the labor movement’s greatest hopes for expansion: commandeering dues payments by recipients of state subsidies. While the decision may be narrow—the Court, after all, did not rule that no public workers may be forced to support a labor union—its impact will be anything but that.

The Illinois law at issue here in Harris was at the leading edge of a nationwide movement over the past decade to organize home-based care workers, including medical assistants and even family child-care providers, and thereby to “reinvigorate organized labor.”

Though a recent phenomenon, the use of sham employment relationships to support mandatory union representation has spread rapidly across the nation.  In just the decade since SEIU waged a “massive campaign to pressure [] policymakers” in Los Angeles to authorize union bargaining for homecare workers, home-based care workers “have become the darlings of the labor movement” and “helped to reinvigorate organized labor.”  From around zero a decade ago, now several hundred thousand home workers are covered by collective-bargaining agreements.

Hobby Lobby is a much simpler and less important case than it’s been made out to be, for reasons the Court clearly spelled out today. Obamacare’s contraceptive mandate had to fall under the Religious Freedom Restoration Act (without even getting to the First Amendment) because it didn’t show — couldn’t show — that there’s no other way of achieving its goal without violating religious beliefs. Moreover, the fact that a for‐​profit corporation is asserting the statute’s protections is of no moment because neither the corporate form nor the profit motive undermines RFRA’s solicitude for the rights of humans — including owners, officers, and shareholders. In short, the mandate fell because it was a rights‐​busting government compulsion that lacked sufficient justification. Nobody has been denied access to contraceptives and there’s now more freedom for all Americans to live their lives how they want, without checking their freedom at the office door.


For more on how the “corporate rights” issue in the case was really a misnomer — because the free exercise of individual humans is at issue regardless of how you style the legalese — see Cato’s amicus brief.

Enough is enough, the Supreme Court ruled today in Harris v. Quinn regarding the power of government to force public employees to associate with a labor union and pay for its speech. Although the Court did not overturn its 1977 precedent, Abood v. Detroit Board of Education, allowing states to make their workers contribute to labor unions, it declined to extend that principle to reach recipients of state subsidies—in this case, home‐​care workers who receive modest stipends from the state of Illinois’ Medicaid program but are not properly considered “employees” of the state.


The Court is right that Abood is “something of an anomaly” because it sacrifices public workers’ First Amendment rights of speech and association to avoid their “free‐​riding” on the dues of workers who’ve chosen to join a union, the kind of thing that rarely if ever is sufficient to overcome First Amendment objections. But Abood treated that issue as already decided by prior cases, which the Harris Court recognizes it was not–a point discussed at length in Cato’s amicus brief. Abood was a serious mistake, the Harris Court concludes, because public‐​sector union speech on “core issues such as wages, pensions, and benefits are important political issues” and cannot be distinguished from other political speech, which is due the First Amendment’s strongest protection. A ruling along those lines would spell the end of compulsory support of public‐​sector unions, a major source of funds and their clout.


It was enough, however, in Harris for the Court to decline Illinois’ invitation “to approve a very substantial expansion of Abood’s reach.” Illinois claimed that home‐​care workers were public employees for one purpose only: collective bargaining. But these workers were not hired or fired by the state, supervised by the state, given benefits by the state, or otherwise treated as state workers. And for that reason, Abood’s purposes, which relate only to actual “public employees,” simply do not apply. Were the law otherwise, the Court observed, “a host of workers who receive payments from a governmental entity for some sort of service would be candidates for inclusion within Abood’s reach.”


While Harris is not a watershed opinion that remakes labor law consistent with First Amendment principles, it does put an end to the forced unionization of home‐​based workers, a practice that has spread to nearly a dozen states and had provided a substantial number of new workers to the labor movement in recent years. Harris also lays the groundwork for a challenge to what it calls “Abood’s questionable foundations.” If recent Roberts Court precedents like Shelby County and Citizens United are any guide, Harris is a warning shot that the Abood regime is not long for this world and that the next case will be the one to vindicate all public workers’ First Amendment rights.